What buses?
In his Capital Journal column in today’s Wall Street Journal, Gerald Seib gets it nearly right about the TEA Partiers.[1]  But only after he stumbles out of the gate:

The buses that rolled into the U.S. Capital over the weekend, carrying protesters steamed up about government spending and decrying the advent of “socialism,” may appear to represent a rich new vein in American politics.

Aside from the unfortunate metaphor (Is it the buses or the protesters themselves doing the representing?), his evocation of buses left my teeth on edge.

Because the image of protesters rolling in on buses carries with it the scent of astroturf:  The New York City ACORN 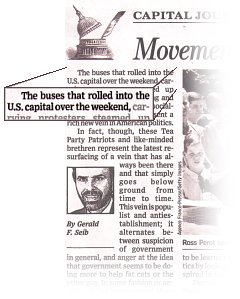 operatives hauled to Connecticut to demonstrate outside the homes of bank executives, or the purple-shirted SEIU gangs who crowded out ordinary citizens at congressional Town Halls.  While I am certain that at least some of the TEA Partiers made their way to D.C. by bus[4] (whether the faithful Greyhound or some deluxe motorcoach chartered by an opportunistic entrepreneur), I am also certain that the vast majority paid their own way.  “Buses... carrying protesters” skates uncomfortably close to dog-whistling the lefty meme that the TEA Partiers are shills financed by shadowy third parties, bought and paid for.[2]

Seib’s attempt to view the TEA Partiers through the lens of Ross Perot’s Reform Party also seems a bit of a stretch.  For one thing, the Reform Party (at least by the time Perot ran for president) was largely a top-down operation (with Perot its out-front face).  The TEA Parties began- and remain, despite Glenn Beck- bottom-up locally driven.  Yet the assumption of similarity encourages top-down analysis of a bottom-up movement, with its resulting misunderstandings.

There are several times he almost gets it: “Perotistas” were angry at George H.W. Bush, the TEA Partiers’ anger targets Barak Obama.  True, as far as it goes.  But by limiting the target to the current president (ignoring the long-building anger at the RINO Republicans), and defining that anger as

...alternat[ing] between suspicion of government in general... and the idea that government seems to be doing more to help fat cats or the other guy

Seib dodges the fact that the TEA Partiers have the entire political-media-educational establishment in their sights, and ignores their fear of that establishment’s malevolence as a motivator

We don’t like having to fight desperate battles to save our freedom and future from socialist politicians every ten or twenty years...  We’re tired of checking the papers each day, to see which group of us has been targeted as enemies of the State.[3]

Thus, although it may be doubtful (as Seib says) that

... many of the senior citizens on the buses want their Medicare coverage turned into a voucher program...

what is not doubtful is that those senior citizens are worried about winding up losers once the dust settles on whatever medical care “reform” the establishment deigns to foist upon them.

He’s also only half there on the TEA Party attitude toward government spending: The TEA Partiers may be “more vocal about the level of spending, less about the way it’s being financed” than Perot’s followers, but that is because most of Perot’s Reformers had accepted the proposition that big government would be With Us Always, leaving “How do we pay for it?” as the only question.  TEA Partiers want a less-expensive, less-intrusive, smaller federal government, and they see bailouts, ACORN grants, industry-takeovers, and earmarks as ideal candidates for the chop.

And he pulls the usual WSJ trick of (vaguely) casting the TEA Partiers’ calls for enforcement of immigration laws as evidence of xenophobia:

[It is] ...doubtful...[that they] share the view of many economic conservatives that the country benefits overall from immigration.

This is unworthy of honest reporting, but, again considering the Journal’s previous performance on this issue, unsurprising.

Where Seib does get it 100% right is in his warning to the Republicans:

Republicans who think they can harness Tea Party Patriots and their anger may be in for a rude surprise...

...as they find themselves gleefully tossed out the door with the rest of the hack politicians. [And I added that last part.]

Overall, I’d score this one “6 out of 10, go read Doc Zero (footnoted below) and Victor Davis Hanson.”

Oh, and what’s with the scare quotes around “socialism”?


-----
[1]  Style note: Inspired by the bumpersticker “Taxed Enough Already,” I’ve decided to capitalize all three letters in “TEA.” Although I realize it’s certainly not “all about taxes.”

[2]  Exactly who is doing the paying remains conveniently obscure. (And where’s my check?)