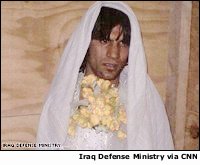 Engineer's disease again
“She was pissed, called me a dork, and that was the end of that.” – Toren's story.

Yes, that Trent Lott. That one.

From this (mostly) Republican voter, who's tired of the usual congressional boodling and backscratching: DLTDHYAOTWO.

Maybe they know something
The RIAA's latest round of "early settlement" letters (part of its anti-filesharing litigation) have targeted a bunch of Ivy League schools. Not including, notably, Harvard.

The group said last week that it has sent letters to Columbia University, Duke University, Dartmouth College, University of Pennsylvania, Yale, Princeton, and Brown University, as part of its continuing battle against music file sharing on campuses...

Nobody in their right mind sues a lawyer assembly plant, coward or not.

Nobody in their right mind sues a lawyer assembly plant, coward or not ...

... especially when that assembly plant has over $35 billion in liquid assets. Doubly so when it also happens to be the stomping grounds of high-profile personal-rights lawyers like Alan Dershowitz. To keep this amount of money in perspective, the Presidents and Fellows of Harvard could decide to spend less than 3% of the endowment -- not even this year's interest -- and have ONE BILLION DOLLARS to keep the RIAA in court for the next handful of decades.

No, do not disturb the 350-year-old 800-lb gorilla who has lots of friends and big piles of cash.

Or, go ahead and disturb him, dummies. I'll start popping the popcorn.

Harvard could literally buy and sell them. Except that its portfolio managers wouldn't make such a poor investment.

• Coverage at p2pnet.net
• Weblog: Recording Industry vs. The People

Aversion therapy and Hollywood's troubles Two fascinating comment threads about what's wrong with Hollywood, one at Libertas, the other at Ace of Spades. In the crosstalk, this vital point was raised:

I remember having ‘Judgment at Nuremberg’ recommended to me by a friend. I looked at the poster, looked at the date it was made (1962), and I assumed it would be a one-sided American indictment of the Nazis. It would be preachy, smug, and have no drama. Even though I’m firmly anti-Nazi, there was no way I would want to watch something like that. Being lectured to is no fun, even if it’s something you agree with.

Years later, I finally saw the movie. More than anything I’ve ever seen, it showed how Nazi Germany worked. It’s a brilliant movie. It actually allowed you to understand — but not agree with — the motivations of senior Nazi figures.

Hollywood has forgotten how to do this. – “autonomoussource,” in the thread at Libertas

To which, “Looking Glass” at Ace:

Hollywood's contempt for its audience is reaching back in time to spoil great movies. The well is thoroughly poisoned...

...The learned reflex is that any given movie is not only bad, but insults the audience, with a slap in the face coming.

This is the result of years of aversion therapy, training people to cringe at the thought of a Hollywood movie.

Hollywood had better hope this attitude doesn’t spread very far among its audience, or it is doomed. An applicable story, about symphony orchestras, below the break...
more...

Lexington [Kentucky] police have increased patrols and ticketing around Fayette Mall and Hamburg Pavilion, where traffic problems persist throughout the shopping season.

The biggest problem is cars blocking traffic as drivers attempt to turn... Police have been handing out tickets for the offense, which will set drivers back $150 in court costs and a $20 fine.

"It's just one small thing we can do to alleviate the problem there," he [Lexington police Lt. J.J. Lombardi] said. – Lexington Herald-Leader

What about telling your officers to get their butts out of their squad cars and direct some traffic?

How to survive your first Guinness
Instructions by “Grandad” at Head Rambles.

Well, this will certainly help their credibility
The San Francisco Chronicle deceives its readers through comment-deletion trickery

Why, that's deceptive and underhanded-- something that one of those sleezy bloggers would do! Like Think Progress, maybe?

[U.K.] Culture Secretary James Purnell has launched the Digital Radio Working Group to work out why more people don't want digital radio, and how to change their opinions.
...
With only 20 per cent of UK households being DAB-enabled (Digital Audio Broadcasting) then 80 per cent of the population are unable to enjoy the delights of Planet Rock's 12-track playlist or the joy of hearing BBC RNanGaidheal late into the night.

Elsewhere: HD Radio: 8-Track Tapes Of Our Age, Or The Next Big Thing?

Name that mayor
The New York Times parodies itself:

Homicides [in New York City] began falling in the early 1990s, when Raymond W. Kelly first served as police commissioner, and plummeted further under subsequent commissioners. Mr. Kelly returned to serve under Mayor Michael R. Bloomberg in 2002, the first year there were fewer than 600 homicides. There were 587 that year, down from 649 in the previous year.

Geez, I'm straining to remember who was Mayor when the murder rate plunged. They mention Blomberg, but I'm sure someone preceded him...[1]

You know, if I wrote a story featuring a newspaper so partisan that it would go to similar lengths to avoid favorabe mention of a political opponent, editors would probably reject it as being totally divorced from reality.


------
[1] Maguire lists the figures in his post. Interestingly enough, although the murder rate began falling under Kelly, the two largest drops in the period 1990-1996 (385, 384) came in the first two years of “Mayor Whatzisname’s” first term, when William J. Bratton was police commissioner.