...No politician is going to say “You know, the best way for me to help you out is to leave you alone.”

Maybe not, but I’d bet you could build a pretty successful campaign if you added this:

1    That would be my Platform.  Not so much what can I do for you when I get there but what can I stop dem Bastards from doing while I am there.


Paul Berman:  [Swiss-born islamist Tariq Ramadan] is fated by his family heritage to stand for certain things.  But he is fated by his own personal temper and the time in which he lives to stand for other things.  He upholds every possible position and its opposite, which did seem to me kind of interesting.

...I read works by [him], by his family, and sometimes by people around him.  I read works written about him.  And I marveled at the contrasts and confusions.

If you listen to Ramadan for fifteen minutes, you will learn that he says all the right things, whatever a liberal-minded person would want such a man to say.

Michael J. Totten:  He does.

Paul Berman:  He’s against bigotry, he’s against anti-Semitism, he’s against terrorism, he’s for the rights of women, he’s in favor of democratic liberties, he’s for a tolerant and multi-religious society...  There isn’t a single objectionable point in the first fifteen minutes of his presentation.

Paul Berman:  Unfortunately, the sixteenth minute arrives, and, if you are still paying attention, you learn that he wants us to revere the most vicious and and reactionary of Islamist sheikhs -- the people who promote violence, bigotry, totalitarianism, and terror.  The sixteenth minute is not good.  The liberal quality of his thinking falls apart entirely.
...
Tariq Ramadan tells his audiences: you must tread in the path of Hassan al-Banna.  This means treading in the path of all kinds of terrible people.  But Ramadan also says: the path of Hassan al-Banna is the path of democracy, tolerance, and rationalism.  And so, Ramadan introduces a remarkable ambiguity into the debate, which ends up producing a sea of intellectual confusion.

"Ambiguity” maybe, but the "intellectual confusion” probably lies only in the minds of his audience.  Because Ramadan is likely engaged in taqiyya - systematic lying to the infidel for religious purposes.

It has full Quranic authority (3:28 and 16:106) and allows the Muslim to conform outwardly to the requirements of unislamic or non-Islamic government, while inwardly "remaining faithful” to whatever he conceives to be proper Islam, while waiting for the tide to turn. - Mervyn Hiskett, Some to Mecca Turn to Pray: Islamic Values and the Modern World

Meaning we must firmly keep in mind that what’s actually going on is: We’re being conned.

Start typing “How do I” into a Google search...

Comfort food
A couple of days back, LabRat put up a post about comfort food which mentioned knothole eggs (a well-remembered specialty of the lamented Blackwood’s Monon Café) and included an intriguing chili recipe (pork-n-beans and cocoa?).  So far her commenters have added family favorites such as fried rice, chicken and flakes, arroz caldo with chicken, fried mush with eggs, and Grandma Sophie’s canned chicken.  Criteria seem to be simple, tasty, and filling, with a helping of childhood memories.

When I was growing up, I was one of those skinny little snots who wouldn’t eat anything, so I don’t have a many childhood “favorite food memories.”  But there are a few. One (recipe is lost in the mists of time) is my mother’s alphabet noodle soup, which began with the leftovers from a bone-in pot roast.  (I’ve come close to duplicating it, but am not quite there yet!)  The other item is not home-made: old-fashioned-full-MSG (i.e., mid-century) mushroom chop suey.  Specifically the midwestern version: Beware of regional variations.  (Think Chicago style, not New York or San Francisco.)  My father used to get it from the Mandarin Inn, and later from Jong Mea (both long gone).  There remain a couple of places in town that come close, although nowadays both use sliced mushrooms... the “tiny” buttons being hard to get.

Nowadays, most of my comfort food “cookery” consists of opening cans, but I have been experimenting with an “everything in the pantry” vegetable beef soup similar to LabRat’s.  (I use pasta in place of rice, and add shredded cheese and fresh mushrooms.)  Simmer all day, serve with fresh-baked bread.  Come grill season I do killer hamburgers (big patty with Parmesan cheese and minced onions folded in; topped with bacon, lettuce, tomato, cheese, and a spoon of thousand island dressing; all on a buttered-and-grilled onion roll.  Oh, with scratch-made french fries and grill-roasted corn.

The only problem today is keeping the weight off.  How times change. 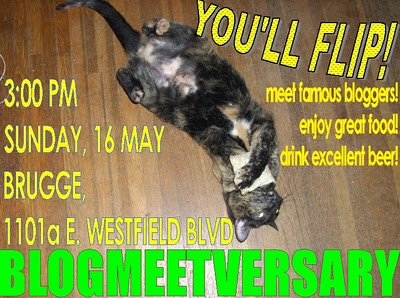 I am deeply concerned that [Utah Senator Bob Bennett] faces opposition that I don’t believe is warranted.

And how’d that work for ya? What say we check in over at Ace of Spades...?

How about this, asshole: The people of Utah get to decide if it's warranted, not you.

If freedom of expression is faced with the threat of illegal violence, freedom should be curtailed.

...So now it's ethical to give in to violent mobs.

The Tea Party has gotten beaten up for the past year for embodying a threat of violence that doesn't actually exist.

The lesson we are getting is that maybe it should.  After all, if you want something, the ethical thing is to threaten somone who disagrees with you.

Ross Douthat:  Not even in South Park?  (HT: Baseball Crank)

It's funny. People complain about the daily bottom-of-the-column pix as not being permalinked. They're just decoration. Like the horizontal rules. Do you permalink horizontal rules? ::chuckle::

If only it was someone protesting Arizona’s immigration policy!
MSNBC’s Contessa Brewer was frustrated that the latest terrorism attempt turned out to be by Yet Another Islamic Radical.  Unfortunately for her, she was dumb enough to talk about it on the record.  James Lileks pounces.


Related (and HT to):
Andrea Harris:  And a vast scream of frustration arose...