Japanese scientists look at anthropogenic global warming
...and find cause for skepticism.
Here are two quotes from a report that was commissioned by the Japan Society of Energy and Resources, and released last month.

We should be cautious, IPCC's [The U.N. International Panel on Climate Change’ s] theory that atmospheric temperature has risen since 2000 in correspondence with CO2 is nothing but a hypothesis...  They should have verified this hypothesis by supercomputer, but before anyone noticed, this hypothesis has been substituted for “truth”.  This “truth” is not observationally accurate testimony.

Kanya Kusano (Program Director and Group Leader for the Earth Simulator at the Japan Agency for Marine-Earth Science & Technology):

...Climate models are still in the phase of reliance on trial and error experiential models.  There are still no successful precedents.  The significance of this is that climate change theory is still dominated by anthropogenic greenhouse gas causation; the IPCC 4th Evaluation Report's conclusion that from now on atmospheric temperatures are likely to continuously, monotonously increase, should be perceived as an unprovable hypothesis...

Of the five scientists involved in producing the JSER report, three conclude that the theory of human-caused recent climate change is at best unproven, and at worst unprovable.  As The Register’s Andrew Orlowski writes, this marks

...a dramatic break with the UN and Western-backed hypothesis of climate change...

Remarkably, the subtle and nuanced language typical in such reports has been set aside.

D’you suppose that the global warming climate change “consensus” isn’t quite as unanimous as has been advertised?

Orlowski’s article, along with three pages of translations of key passages (from which the above quotes were extracted) is here.

SofTest: Just say no
Let’s Kill Bad Software Dept.:
“I’d mark this (SofTest) rant as ‘NSFW,’ were I you.”

“I disagree with 85% of Obama’s positions, but I want him and our country to succeed.  He can’t do that if he hasn’t been tested.  One of the best tests is a campaign.  But he didn’t have one of those, he had a coronation. [MSNBC’s Chris] Matthews and his colleagues across the media let our country down.  They gave Obama no vetting whatsoever.  Now Matthews wants to complain?  It’s a little late for that.”

And the failure wasn’t only with Obama.  The coverage of the Republicans wasn’t “a coronation,” but it wasn’t even a substantive attack.  Instead we got endless horse-racing, gaffe-spotting, and Sarah-Palin’s- Daughter’s-LoveChild irrelevance.

In a perfect world, press coverage of the political campaign would leave voters with some idea of the character of the candidates and the nature of their positions.  Which doesn’t mean puff pieces:  While candidates should get the opportunity to express their ideas, the press should hold candidates’ feet to the fire when inconsistency, vagueness, or illogic rear their heads.  Unfortunately, this type of coverage is harder than most.  Asking intelligent questions requires that the questioner understand the issue.[1]  It also requires the questioner to give the person questioned some benefit of the doubt, at least initially.  Far easier to play “gotcha,” rewrite some pollster’s latest press release, play gaffe-of-the-day, or play “he said/he said” using the opposing party’s talking points.

And so, actual campaign coverage has drifted so far away from this paradigm that it makes me wonder what “press” it is that the authors of articles like this one[2] have been reading.

-----
[1]  Although I have a “can’t go wrong” way for an unprepared reporter to cheat and still be relevant:  Candidate states his position/policy/program.  Reporter asks two questions: (1) “How do you plan to pay for this?” and (2) “How much will it reduce individual liberty?”

[2]  Via Daily Pundit.  I may have a complete post on the TNR article, provided I can avoid repeating myself.

Attempt at DTV transition leads to gunfire, SWAT standoff
His shut off the cable, and then...

The 70-year-old gunman... could not get his digital converter box to work.  Police took Walter Hoover into custody after a brief standoff and charged him with unlawful use of a firearm.

I’ve sometimes entertained thoughts of shooting MY set.  But only because of the programming...

and says it’s time for a Weekly Standard Swimsuit Issue.

What would it have been like to fight up close and personal with such a weapon? 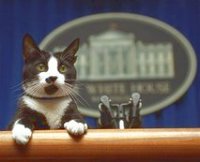 Den Beste, writing about anime
One way to wake things up on a dull Saturday morning:

They’ve got a publicity picture which includes the heroine, and the blurb for the series begins this way:  “Rin Asogi doesn’t stand out in a crowd, but that’s okay by her.”

Um, actually, from the picture she damned well stands out a lot.  Them’s E cups, I do believe...

Republican politicians on Thursday called for a sweeping new federal law that would require all Internet providers and operators of millions of Wi-Fi access points, even hotels, local coffee shops, and home users, to keep records about users for two years to aid police investigations.

The legislation, which echoes a measure proposed by one of their Democratic colleagues three years ago, would impose unprecedented data retention requirements on a broad swath of Internet access providers and is certain to draw fire from businesses and privacy advocates.

[The Senate and House versions both contain] the same language: “A provider of an electronic communication service or remote computing service shall retain for a period of at least two years all records or other information pertaining to the identity of a user of a temporarily assigned network address the service assigns to that user.”  Translated, the Internet Safety Act applies not just to AT&T, Comcast, Verizon, and so on--but also to the tens of millions of homes with Wi-Fi access points or wired routers that use the standard method of dynamically assigning temporary addresses.

Of course, there’s the usual excuse...

“While the Internet has generated many positive changes in the way we communicate and do business, its limitless nature offers anonymity that has opened the door to criminals looking to harm innocent children,” U.S. Sen. John Cornyn, a Texas Republican, said at a press conference on Thursday. “Keeping our children safe requires cooperation on the local, state, federal, and family level.”

If Republicans ever want to regain their reputation for favoring limited government, they must stop advocating this kind of big-brother nonsense.  What lover of freedom calls for keeping two-year records of your internet use?

Well, it appears that’s just fine with these guys.

And as I have said before, it is time we stopped giving them the benefit of the doubt.

Congress is full of lawyers.  Congressional staffs are full of lawyers.  Lawyers are supposed to be able to figure out what their words mean.  Therefore, we must assume that the scope and impact of these bills is intentional.

Republicans used to be able to tell the difference between “protecting the children” and “giving the police and prosecutors everything they ask for, without considering the impact on individual liberty and privacy.”  But noooo....

Thanks a bunch, Cornyn.  Good job, Smith.  Should have left it to the Democrats.

And I hereby pledge $100 to the first real Republican who wants to run against either of you clowns in the next primary.

Naming names:
The Senate and House versions, and their sponsors:
S.436 “to amend title 18, United States Code, to protect youth from exploitation by adults using the Internet, and for other purposes.”
Sponsor:  Sen John Cornyn [TX] • Cosponsors: None

H.R.1076 “to amend title 18, United States Code, to protect youth from exploitation by adults using the Internet, and for other purposes.”
Sponsor:  Rep Lamar Smith [TX-21] • Cosponsors: None
Via: Slashdot

1 I think Mr. Steele has to, instead of trying to get new people in with a hip hop makeover, try to make the GOP an incubator of libertarian and small government conservative candidates.

I have a wi-fi setup with WPA2 protection under a massive password.  Meaning the darn thing is mine, and only mine.  No one piggybacks it: there's plenty of dumb neighbors with wide open wi-fi's to suck off of to make mine the path of most resistance.  But yet I'd have to keep a log.

Quick! Lock the door and pull the covers over your head!

Everything Seemingly Is Spinning Out of Control

From Best of the Web Today