Definition of “built to fail”
Attempting to explain the “shortage” of men on college campuses while throwing around terms like “hegemonic masculinity.”

1 Anybody who says "hegemonic" without breaking into guffaws needs to be set on his side in a cool basement until he matures.

“When a crazy man with a gun tells you he’s going to shoot you, the smart move is to act as though he really will do it”

...If we had taken Hitler at his word in the early 1930s, WWII and the Holocaust would never have happened.  But instead of acting as though he really meant what he said, the European Powers claimed that he was really just being belligerent to score political points.

This holds true for North Korea today.  “Oh,” they scoff, “Kim is just trying to score more loot from China and lower sanctions from the U.N.  He’s not really a threat to anyone; half his country is starving. Besides, North Korea makes threats all the time.”

Only, the half of his country that isn’t starving is the military...
- Gabriel Malor at Ace of Spades HQ

There’s a case for taking the threat-makers at their word and acting accordingly, if only pour encourager les autres (Sorry you got flattened; next time, don’t make threats!).

Unfortunately, a political class that routinely accepts and engages in... erm... misrepresentation for political point-scoring and election-winning leaves us particularly handicapped when it comes to judging the veracity of the fulminations of madmen.

Get well, Frank
If things proceeded per schedule, Frank James went in for emergency eye surgery Tuesday night (detached retinas, both eyes). Fifty years ago the condition meant almost certain blindness, but nowadays thanks to lasers it’s usually controllable, if not fixable. Still scary though... go send him your best.

Thank you so much for your concern and prayers, but it was only the left eye.  Fortunate for me it was caught early on.  I am presently in the process of 'mending'.

Running the numbers on light rail

When Phoenix was building its light rail system, I made the following two-part bet: This bet has been tested in a number of cities, including LA and Albuquerque, and I have not lost yet. Now the numbers are in for Phoenix... 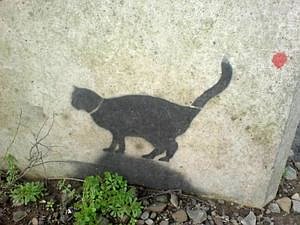 The Federal Trade Commission wants to regulate your blog
A little heads-up, via That Other McCain:

This summer, the government agency is expected to issue new advertising guidelines that will require bloggers to disclose when they’re writing about a sponsor’s product and voicing opinions that aren’t their own.  The new FTC guidelines say that blog authors should disclose when they're being compensated by an advertiser to discuss a product.
...
Like other FTC guidelines, the new policies won’t be binding.  But they may influence which cases the agency decides to bring to court, says FTC attorney [Rich] Cleland. - Business Week

(Slight disconnect in those last two sentences, isn’t there?)

So, in all the time I’ve been blogging, I’ve yet to get any of these fabulous wheelbarrows of cash that I’m supposed to get for being a part of the Triangle of Death.

Now I discover that, in addition to cash, I should be getting free stuff in exchange for saying nice things about it...

Obviously I’m in the wrong sector of the blogging world, because the free stuff pipeline is pretty sluggish here.

1 And those of us who don't have advertisers?  I wonder if the NRA, ARRL and EAA links on my page are advertisements? If so, I'll take a life ARRL membership and cash from the others---small, used, non-sequential bills, please.

The wrong kind of wedgie 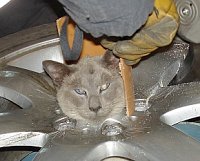 Casper the cat has learned his lesson after getting his head wedged in a spare tyre.

The mischievous Siamese found himself in the tight spot and needed the help of a fire-crew after a passer-by found him in distress.

The RSPCA were first on the scene and officers took him to Bury St Edmunds fire station in Suffolk where firemen spent an hour cutting him free.

What a tool.  I thought the whole point of whiskers on cats was so they wouldn’t get stuck in places they don’t fit.

He’ll keep government “all in the family”
The Register:

A Croatian politician [Independent candidate Josko Kraljevic Risa - o.g.] is close to becoming the mayor of the town Prolozac - despite promising to be corrupt and to treat the town “like our family business.”

Voters have flocked to the campaign, which runs under the slogan “All for me, nothing for you”...

The campaign, which also runs under the alternative slogan “It is definitely going to be better for me, but will be the same for you,” has struck a chord with local voters tired of corrupt politicians. “Whoever is in power, we know that they steal. At least he is honest,” commented Ivan Vjisnic, a Prolozac resident...

Elsewhere:
Croatian Times:
Croat politician slogans ´All for me, nothing for you´ in run-off election

Other than you paying for California’s long-standing stupidity, what's their plan to turn the state around?  Governor Schwarzenegger proposed $15 billion in cuts and warned that if his propositions fail, California would need to release 40,000 prisoners, lay off more than 50,000 teachers and close down dozens of fire stations.
...
How many times do we have to hear this fraudulent argument?  When you have literally no government structure whatsoever, then I’ll believe you have nothing less important to cut than fire fighters and prisons.  You can’t make that argument when you’re still spending: $1.5 million for nontoxic dry cleaning; or $40.5 million for migrant day care; or the estimated $13 billion for education, health care and other services for the state’s 3.2 million illegal immigrants.

Of course, the press is already pulling out the meme it tried to paste on the TeaParty folks:  Anyone who voted against the propositions is a hypocrite who “wants” all those “services,” but doesn’t want to pay for them.

By rejecting five budget measures, Californians also brought into stark relief the fact that they, too, share blame for the political dysfunction that has brought California to the brink of insolvency.
...
“They clearly want more in services than they’re willing to pay for in taxes,” said Ethan Rarick, director of the Robert T. Matsui Center for Politics and Public Service at UC Berkeley.
...
“We all want a free lunch, but unfortunately that doesn’t exist,” said former Gov. Gray Davis...
...
On Tuesday, Californians showed they were unwilling to scale back their demands in tight times: Voters turned down propositions that would have freed up money that they set aside years ago for mental-health and children’s programs.

Which ignores two points:  First, every line in California’s budget has a constituency that “wants” it, and each constituency has its pet legislators who would be glad to give it to them.

But there will never be enough money.  Even if the government takes 100% of everyone’s income, it still won’t be enough.  Because “wants” are infinitely expansible.  Meaning the job of government isn’t just giving people stuff, it’s also telling people no.  Which California’s politicians have failed to do... miserably.

I want a 23-room mansion, with an Olympic-sized pool, a golf course, and an amusement park.  I am not, however, willing to pay for it.  By Sacramento logic, the only conclusion would be to provide it for me.
- commenter “Underpants Gnomes Publishing, Inc.” at Ace

And the second point:  Amid all the special-interest log-rolling, what about the average taxpayer?  You know, the person for whom projects such as artist grants and sea otter conservation are “nice, if we can afford them,” but whose first priority is for someone to answer the phone when they dial 9-1-1.

When these people feel neglected:
When they find themselves paying a ton of taxes as their roads fall apart, their schools rot, and the public payroll skyrockets–
When the people they elect– regardless of party– only have time for the “we-want-a-handout” blocs–
When their government seems to have plenty of time to hassle them about cigarette smoking, plastic bags, and wearing seatbelts, but just can’t quite manage to get the gangbangers off the streets, stop the “taggers” from vandalizing their property, and catch the crooks who break into their homes–
When, in short, citizens begin to believe that they’re not getting their money’s worth and that there is no prospect of getting it–

Is it any wonder they start getting fractious?

These are the mock-ups (preliminary design elements) of modules that will constitute a proposed 22′ tall by 50′ long feature wall panel system in a building lobby with each module having a different pattern sculpted into the face. The blocks of wood are 3.5″ cubes and are glued together to form the background pattern.