As an intellectual, I would like to study how that worked. I’ll write a book about it if someone will send me the raw material I need — the complete archive of the Journolist.  I need a Deep Throat.  I promise not to regard you as disgusting.

...In the interests of journalistic transparency, and to offer the American public a unique insight in the workings of the Democrat-Media Complex, I’m offering $100,000 for the full “JournoList” archive, source fully protected.  Now there’s an offer somebody can’t refuse.

Reynolds ratchets up the pressure (today):

(1) If, as Jonathan Chait says, there’s nothing there, why not relieve Breitbart of his bucks?

(2) If you’re worried about your own stuff being released, you don’t really safeguard it by not selling out to Breitbart — you just ensure that if one of the 400 other members does, you won’t get the $100K.

Read on...
By The Book  Dept
Via Instapundit, 26 Ways to Prevent Summer Reading.

It’s long been my contention that the best way to eliminate any enjoyment of a book is to make it required reading for high school English.  And the most effective aversion therapy for reading in general is to saddle a kid with a while-you’re-on-summer-vacation read-these-and-report-on-them list.  Ugh.

1 I never forgave the teacher that made me read Watership Down over summer vacation.  Progressive Rabbits have their own book. 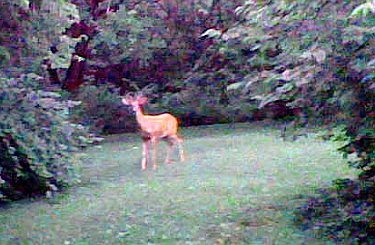 Spotted in my back yard last evening. Undoubtedly the critter who’s been decimating my hydrangeas.  Hey Tam!

1 Man, the temptation would be sooooo strong...

World Cup Sucker
FI-FA-ho-hum  Dept
If stuff like this (and this, and this) had gone on during– say– a weekend’s NBA basketball, the feds would have been all over Las Vegas, looking to find out who had money down on what.

Well, after the Army’s experience with Rolling Stone...
Instapundit:

CHANGE: Michael Yon invited by Brits and US to embed again.

1 McChrystal announced today that he's retiring. Guess they ran out of 4-star slots since Patraeus is not holding down two of them.

2 Gen. McChrystal has 34 years in. There is nothing else for him in the military. He will get $150,000 a year before deductions. He might write a book. If so I will buy it. 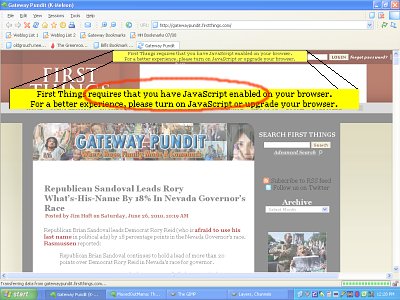 All you need to know about FinReg
Congress labored, and brought forth an abortion  Dept
“nemo paradise”:

The people trying to keep a straight face while suppressing the urge to yodel are the lawyers, because they are going to be very, very busy for a long time to come.

No one can agree on what this bill actually says, since the one thing that is clear is that nothing is clear at all.  This is hardly surprising, and very much in line with what most lawyers really expected.

If [FinReg had been law in] the year 2000, the only part of it that might have prevented, or at least slowed down the crisis, was the new minimum underwriting standards for mortgages.  No more “No Doc, NINJA, or Liar loans.”  That Lenders must verify income, credit history and job status certainly would have prevented the worst vintages of sub-prime and exotic mortgages from ever being written, or subsequently securitized.

Other than that, there is not a single element of the reform that would have prevented the last crisis.

Compare and contrast
Cognitive Dissonance  Dept
Yeah, I know anecdotes != data, and there’s always an exception.  Still, the variations continue to amaze me.

Deciding who counts as a feministChoose wisely.
There’s no question which I’d rather associate with.

When Oscar the cat lost both his hind paws in a farming accident, it was feared he'd have to trundle around in one of those wheeled-cat apparatuses. But Noel Fitzpatrick, a neuro-orthopedic veterinary surgeon in Surrey, pioneered a groundbreaking technique instead, installing weight-bearing bone implants to create a bionic kitty.

What’s revolutionary is that these “intraosseous transcutaneous amputation prosthetics” are attached directly to the bone, and the skin grows into place around them.  Picture and video at the link.