Clipfile - September 30, 2009 “...It’s creepy ... that the educated elite really don’t think the law should be applied fairly.  All this talk about justice and the rights of man - it all goes by the wayside when it’s someone famous.That’s not the rule of law.  That’s... government by glitterati.” - “miller,” in a comment at Althouse

Clipfile - September 29, 2009 “There is usually only a limited amount of damage that can be done by dull or stupid people.  For creating a truly monumental disaster, you need people with high IQs.” - Thomas Sowell

Clipfile - September 28, 2009 “When the only tool you have is a hammer, every problem looks like a nail.When you have a hammer and a sickle, every solution looks like a government takeover.” - zmdavid, at Ace

It’s BlogMeet day, hooray!
At dinner with a friend last night I mentioned that I was planning to attend the blogmeet this afternoon:

He:  Do you have to bring your librtarian membership card to get in?

Me:  No, but your concealed.carry.permit would probably be appropriate.

Marvelous afternoon for sittin’ on the patio, and the usual terrific company.

And Brugge was great, too.  Hadn’t been before, but will definitely get back.

1 Do they not have an awesome menu?

Sunday morning reading - September 27, 2009
“These fighters consider children either an integral part of the fight... or as completely irrelevant collateral damage...”

Bookworm has a little reminder about the kind of people we’re fighting in Afghanistan, and a contrast:

In case you were worried, a worry that distinguishes you from the Taliban killer aiming at one of his own countrymen (or country-children), the child survived the bombing, American medics treated him on site, and he ended up being airlifted to America for further treatment.

“Is it ‘bigotry’ not to want people who would destroy our freedom moving here?”

Meanwhile, Eric at Classical Values wonders about the wisdom of letting that mindset into America:

He was a senior instructor for new al-Shabab recruits, including a handful of young Somali-Americans from Minneapolis.
...
His name was Salah Ali Nabhan.  He’s the man American commandos killed in a daylight raid in southern Somalia on Monday.

The Minneapolis boys said they recognized him because he had been one of their trainers in the camps in Somalia -- on loan from al-Qaida to boost the training operations of a Somali militia called al-Shabab.

What on earth are these people doing here in the United States?
Does anyone remember the video showing Somali teenagers harassing a gay man for fun?

If their more radical brethren in Somalia want to impose Shariah law and amputate arms and legs, how long will they be content merely to harass Americans because of what they think they might be doing in bed?


“Now they don’t just have bad publicity, they have publicity as being perfectly fine with child sex slavery.”

“ACORN only gets a little federal money anyway”.

I guess aiding and abetting slavery would be laudably entrepreneurial if they didn’t get any, then.

...but doesn’t fail to miss the serious part:

When you stop being able to politically object in the strongest possible terms to slavery, with no caveats or yeah-buts or but-theys, then you’re already heading down the road as being as soul-dead and corrupt as the ACORN officers.


“‘We, therefore, do not hold the original raw data but only the value-added (i.e., quality controlled and homogenized) data.’”

An unbelievable blunder, incredible sloppiness, or burying the evidence?  You be the judge:

“We have 25 years or so invested in the work.  Why should I make the data available to you, when your aim is to try and find something wrong with it?”

Reread that statement, for it is breathtaking in its anti-scientific thrust. In fact, the entire purpose of replication is to “try and find something wrong.”  The ultimate objective of science is to do things so well that, indeed, nothing is wrong.

And the first rule of science is to record and preserve your original data.  It’s so fundamental that “no data” = “automatic F” in high school science courses, ferchrissakes.

We “deniers” have suspected all along that much of the “science” surrounding global warming climate change is made up.  It’ll be ironic if it turns out those suspicions were truer than we ever thought.  RTWT • 1000 words
UPDATE, related 09092817:05:  AGW “hockey stick”: A “thin subsample”?

...The key ingredient in a lot of the studies that have been invoked to support the Hockey Stick, namely the Briffa Yamal series... depends on the influence of a thin subsample of post-1990 chronologies and the exclusion of the (much larger) collection of readily-available Schweingruber data for the same area.

“It is precisely because of stupid old farts like yourself that we find ourself with many of these structural problems.”

Insty linked “HughS’s” Friday Night Thoughts on the latest bank failure and the dramatically different responses of the political class and the average citizen.  Hey Washington, anybody listening?  Then, in the comments, a preview of the forthcoming generational war:

People warned you for years - sometimes few people, sometimes many, depending on the crisis - and people like YOU said, well, exactly what you've just said.  Not enough people listened, and they passed the bill down to my generation.

...Guess what; my generation gets to choose the previous generation's nursing home.  Or lack thereof.


“Middle America is an exotic place inhabited by aborigines who bowl, don’t eat arugula, and need to be reminded to inflate their tires.”

The Rest Of The Country, as viewed from the academy.  Mostly harmless, at least until the academy takes charge of the government.

It is the role of the university, from a proper distance, to help them, by making sophisticated, selfless decisions on health care and the environment that the unwashed cannot grasp are really in their own interest — deluded as they are by Wal-Mart consumerism, Elmer Gantry evangelicalism, and Sarah Palin momism.  The tragic burden of an academic is to help the oppressed, but blind, majority...

The “authentic” outbursts of Van Jones about white polluters and white mass-murderers are standard campus fare.  In universities, such over-the-top rhetoric and pseudo-Marxist histrionics are simply career moves, used to scare timid academics and win release time, faculty-adjudicated grants, or exemption from normal tenure scrutiny.  Skip Gates’s fussy little theatrical fit at a Middle American was not his first and will not be his last.


“The rumors are true, my dark master.  That scum Brietbart has turned his attention to the NEA.”

ACORN busted, the Blue Dogs hiding under the porch, dang!  Ever have one of those days when nothing goes right?:

Obama:  Biden, have Czar Van Jones deploy his storm troopers!  We'll shut down this Breitbart by force!
Biden:  Master, Czar Jones isn't here.  He was revealed as a truther, resigned in disgrace, and has joined a cult headed by Charlie Sheen splitting atoms with his mind.
Obama:  Oh.  Well, contact my allies in ACORN and tell them to turn out in full force and-
Biden:  Master, ACORN has been neutralized after getting caught in a child pornography sting in a few offices.
Obama:  How many offices?
Biden:  Six, in major cities on both coasts.


“Like most hunting breeds, with the instincts built into such bloodlines, he can also be self reliant and resourceful, a Knight with a tail.”

And for a no-politics finale, a Dog Story from Brigid.
Stealth: It’s not just for aircraft! • 1150 words, 4 pictures

“Would you prefer to be hanged or shot?”
Mickey Kaus:

23.  Which comes closest to your view?
What if you just think it’s something we should do and that we can afford to pay for?

Or if you think that the adminstration proposals for “fixing healthcare” won’t accomplish one whit when it comes to “fixing the overall economy?”

When they got to the end, 47% of the poll’s respondents said they’d rather be living in Philadelphia, thanks (although with the death panels that may not be an available option).

1 These choices are similar to the question, "Have you stopped beating your wife?" No answer is really acceptable because no answer will make you look good.

The real answer is that there is no need to reform healthcare other than Tort Reform. Missouri and several other states have already proceeded in that direction. Missouri implemented a cap on medical malpractice awards and BINGO! the number of suits have dropped over 60%. The same act added "loser pays" and also put a cap, although higher, on punitive awards as well.

That option works. ObamaCare, in all its flavors will not. Of course, it wasn't intended to work because healthcare is not the real target. Government control is.

Shhhh! Somebody is *older* today
Actually, everybody is older, but somebody is having an anniversary:

...which is fun, although I’m now officially closer to 30 than 20.  Most women my age get a little freaked out by that, but I’m actually glad about it.  You see, Saturday is also my birthday:  It’s the two-year anniversary of when I kicked cancer in the knee and told it to shut up and go make me a sandwich, I’m too busy for that bullcrap. 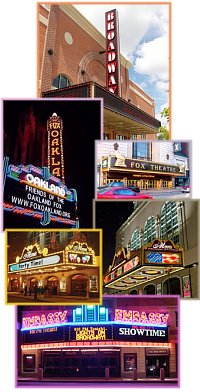 My continued quest to uncover lamp layout and wiring information for a scintillator[1] led to yet another webcrawl yesterday.  Still didn’t find what I was looking for,[2] but did stumble across Cleveland’s Wagner Electric Sign Company, and their gallery of theater marquees.  Yep, somebody still (re)builds ’em like they used to!

The gallery includes 35 projects, two of them in Indiana: The Embassy Theatre in Fort Wayne (bottom picture), which also includes a 3-story-high vertical/blade sign; and the Morris Performing Arts Center (2nd from bottom- both) in South Bend.  (Drill down and you’ll find a PDF about that project.)

The “copy panels” on the front and sides of the Morris marquee are actually tri-color LED displays.  Who says you can’t blend new technology into an old artform?

Previously:  Chaser play
-----
[1]  That’s the controller and the associated lamps that produce the twinkling effect of neon-outlined incandescent letters.  Perhaps the circuiting of the lamps is a trade secret?

[2]  Anybody have any pointers?

Credits:  Billy found it, and Tam chimed in.  Thus works the web.