TWO days hence, much of our commentary and opinion will move to a new, online presentation that includes letters to the editor, op-ed essays and a variety of cartoons, comments and blogs.

He says it’s because opinion – not news – is what’s popular online...

Online-information searches during the day and evening hours is deciding for us where most people go for commentary.  Currently, commentary is king in the online world, where opinions vary and clash hourly in the process of democracy.

At least, that’s my impression, after unpacking that first sentence (“searches ... is”? “deciding...where”?).

And since nobody (to speak of) buys advertising on the opinion page, why not eliminate what doesn’t sell?  (Here’s why.)

But all is not lost!

Most op-eds, the guest essays that often place notable politicians and writers in front of you, also will move to the Web site, leaving us room for local columnists and local editorial opinion in print.

(Did’ja really believe they’d dump the editorials?  How would anybody know what to think?)


Via:
2Blowhards (where there seems to be the impression that the Times is dumping print  editorials altogether) via Dustbury (who RTFA and is Not Deceived).

Senator Feingold of Wisconsin is offering the most detailed legislative proposal yet to rein in the essentially unfettered authority customs officials have claimed to search laptops, cell phones, and other electronic devices travelers bring into or out of America.

Under a 29-page bill Mr. Feingold introduced on Friday, customs agents at airports and borders would need to document a “reasonable suspicion” before inspecting a computer or similar device carried by an American resident and could only hold on to the device for 24 hours before starting the process of seeking a warrant from a judge.

“Requiring citizens and other legal residents of the United States to submit to a government review and analysis of thousands of pages of their most personal information without any suspicion of wrongdoing is incompatible with the values of liberty and personal freedom on which the United States was founded,” a preamble to the bill declares.
...
Senators Akaka of Hawaii, Cantwell of Washington, and Wyden of Oregon, all of whom are Democrats, are co-sponsoring the legislation. - The Sun

Wouldn’t it be refreshing to hear the Republicans call anything “incompatible with the values of liberty and personal freedom on which the United States was founded”? Just for a change?

Time to question their patriotism?
Much head-shaking about the “illogical” actions by the Democrats re: the bailout plan and yesterday’s vote.[1]

But suppose they’re not being illogical:

Before the 1994 Republican takeover, Democrats had sixty years of virtually unbroken power in Congress - with substantial majorities most of the time.  Can a group of smart people, studying issue after issue for years on end, with virtually unlimited resources at their command, not come up with a single policy that works?  Why are they chronically incapable?

One of two things must be true.  Either the Democrats are unfathomable idiots, who ignorantly pursue ever more destructive policies despite decades of contrary evidence, or they understand the consequences of their actions and relentlessly carry on anyway because they somehow benefit.

I submit to you they understand the consequences. - James Simpson

Pelosi got up there and insulted the very people whom she insisted give her political cover on a bill she said she WOULD NOT JUMP for without the GOP; she then proceeded to play politics and lambaste them.

Obama said in his television interview that he was inclined to support the bailout because it includes increased oversight, relief for homeowners facing foreclosure and limits on executive compensation for chief executives of firms that receive government help.

“None of those were in the president's provisions. They are identical to the things I called for the day that Secretary Paulson released his package,” Obama said. “That I think is an indication of the degree to which when it comes to protecting taxpayers, I was pushing very hard and involved in shaping those provisions.” - Fox News: “Obama: McCain’s Role in Bailout ‘Katrina-Like’”

with Obama campaign co-chair Jesse Jackson Jr.’s vote against it. 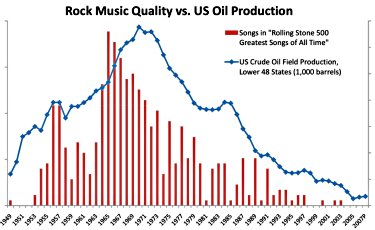 In light of this discovery, Francis W. Porretto raises the critical question:

...Should we struggle to produce more oil, so the quality of the music will increase, or should we attempt to draft better composers and musicians into rock ’n’ roll, so we can have more oil?

Elsewhere:
Climate Skeptic: From the Correlation Not Equal Causation Department
Via: Dolly

1 This implies that Rolling Stone knows something about rock and roll, which hasn't been true since one of the Ramones was named Tommy.

There’s a hot new group in town...
Is this something like what everyone had in mind? 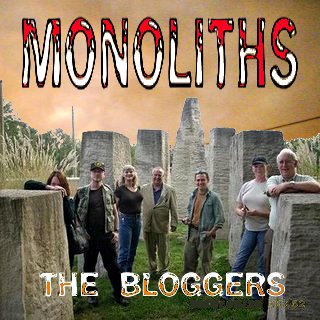 Coverage here.here.here and here.
(And a paragraph here, but that post deserves its own link.)

2 That should say FANTASTIC!
My dad had a lot of those old red records. They were beautiful to look at, like flattened rubies. What a deep, rich red that was.

“Discussion draft” of bill is up...
Ace has it here. Michelle Malkin here.

This is a “discussion draft,” i.e., not the final version. There is still plenty of opportunity for mischief. I expected the first draft to be relatively clean and without any surprises; watch out for things that get added at the last minute.

Took a quick scan through the draft’s 110 pages, and IMO it pretty much falls in line with the earlier statements.

Commenters at Ace are concerned that the combination of Section 103 (excerpted):

SEC. 103. CONSIDERATIONS.
In exercising the authorities granted in this Act, the Secretary shall take into consideration—
(1) protecting the interests of taxpayers...
(2) providing stability and preventing disruption to financial markets...
(3) the need to help families keep their homes and to stabilize communities...
... [6 other considerations omitted]...

SEC. 109. FORECLOSURE MITIGATION EFFORTS.
(c) CONSENT TO REASONABLE LOAN MODIFICATION REQUESTS.
—Upon any request arising under existing investment contracts, the Secretary shall consent, where appropriate, and considering net present value to the taxpayer, to reasonable requests for loss mitigation measures, including term extensions, rate reductions, principal writedowns, increases in the proportion of loans within a trust or other structure allowed to be modified, or removal of other limitation on modifications.
...
SEC. 110. ASSISTANCE TO HOMEOWNERS.
...
(2) MODIFICATIONS.—In the case of a residential mortgage loan, modifications made under paragraph (1) may include—
(A) reduction in interest rates;
(B) reduction of loan principal; and
(C) other similar modifications.

especially the “shall consent” language in §109(C) might constitute a backdoor mandate to the Secretary to “...turn high interest mortgages into low ones, forgive portions of the PRINCIPAL not just interest, etc. for people who borrowed too much f*cking money to begin with.”[1] I’m not enough of a lawyer to evaluate that argument, but I’ll agree that the use of “shall” instead of “may” bothers me.

Malkin sat in on the evening conference call, and has a large list of objections.  Rather than repeat it here, I’ll just link... I urge you to read the whole thing.  Here’s one reason:

Nevertheless, GOP House Minority Leader John Boehner and the House Republican leadership have thrown in the towel... Boehner called the deal a “crap sandwich,” but told House Republicans he’ll vote for it.

Okay, here it is...
Bailout plan comparison based on statements and press coverage.  Sources and revision history at the bottom.

Old Grouche:  the only thing I've read about this deal that's not mentioned in your chart is the Treasury Sec. ability to re-establish the real estate value of foreclosed mortgaged properties.  This is one of the details that could be un-constitutional.

For instance: you live in a cul-de-sac of eight homes (all are pretty equal in value and features), four of which are foreclosed and empty.  You value your home at $300,000.  The Treasury comes in revalues the foreclosed homes at $100,000 to get them sold, what does that do to the value of your home, which is either paid for or current with your payments?

If I missed that in your chart I apologize.  Thanks.

2 Here in Texas, the "rule" by which tax appraisers value homes is to ignore totally any prices on sale or resale of foreclosed homes, unless more than 50% of a given neighborhood (which is flexibly defined to include more houses so the 50% is always hard to meet) is composed of foreclosure homes.  If the 50% limit is met, then foreclosure prices are included in appraisal values for the other homes in the neighborhood.

Effectively, this means if you are in a non-foreclosed home it is nearly impossible to get the tax appraisers to reduce your home appraisal based upon nearby house prices on foreclosed houses. Similarly, if you buy a foreclosed house at auction on the courthouse steps, the appraised value of the house is based on non-foreclosed comparables in the neighborhood. However, if you buy a foreclosed home (say, from an investor who got it at auction) at a good price, that price is definitive for the first year of your tax appraisal. It then can go up the next year.

3 Frank:
Actually, the value adjustment appears to apply to any property whose mortgage the government winds up owning, not just those in foreclosure. See Pelosi quote in "Bankruptcy cramdown" section

“The government can use its power as the owner of mortgages and mortgage backed securities to facilitate loan modifications (such as, reduced principal or interest rate, lengthened time to pay back the mortgage)”

There's already been concern that the language in the "draft document" actually mandates reevaluation, making it a backdoor mass-bailout of foolish borrowers. See next post.

Because maybe...
“Maybe it gave them a teeny, tiny, isty bitsy, little glimmer of - maybe? - hope.”

We hope you are enjoying the increased music quality/bitrate and the improved usability of Walmart’s MP3 music downloads.  We began offering MP3s in August 2007 and have offered only DRM (digital rights management) -free MP3s since February 2008.  As the final stage of our transition to a full DRM-free MP3 download store, Walmart will be shutting down our digital rights management system that supports protected songs and albums purchased from our site.

You’ve got until October 9th to back ’em up.  Isn’t that special!

Senator Jim DeMint talks with John Hawkins about the bailout
One more wrinkle:

The biggest creditor is China and that’s a big part of this equation that’s not being talked about.  If America was not in such deep debt, we could deal with this problem much more effectively -- but China has essentially told the U.S. that we make good on all the debt that they're holding, which is nearly a trillion dollars, or they're going to stop lending us money.  To show that they’re serious, they’ve already stopped lending us money and if we can't borrow money every day, literally hundreds of billions of dollars, we default on the loans that are coming due.

So, this is a house of cards that the government has created and my biggest frustration with this whole mess is that it is being blamed on free enterprise, capitalism, and corporate greed -- when in fact, this is a good example of what happens when the government gets involved in the private sector.

The whole thing is here.