More ugly software
My browser can't get off of the home page.

Possibly because something is truncating the honkiin’ long asp URLs[1] that the site uses.

Viewing the source reveals that the generator that produces these abominations is a program called “Oxcyon Centralpoint 7.0”

Its flagship technology, Centralpoint, is the only Lifecycle Management technology available within ECM, incorporating virtualization yielding pervasive delivery. Oxcyon is not an ASP (Application Service Provider) but is able to offer subscriptions to its technology across disparate physical environments in contrast to traditional, leave-behind applications which dominate this market today. This technology eliminates this obsolescence and changes time to market from months to minutes eliminating costs and risk for its clients. Oxcyon enjoys early market adoption in numerous verticals including: Publishing, Healthcare, Manufacturing, Government and Non Profit/Religious markets. [2]

(Not to mention buzzword-compliant... )

Anyway, you have been warned.

Our dysfunctional nomination process
“Anyone willing to do what is required to become president of the United States is thereby barred from taking that office.” – text of the “Greenspan amendment”
Two related posts:

Morgan Freeberg, at House of Eratosthenes:

Now, here, we have a situation where none of the listed candidates have much of an idea about what they would do.  I’m tellin’ ya, something is going on here.  I’m not that old.  I remember when that was what it was all about.  But we’ve become so obsessed with full heads o’hair, sparkly smiles, twinkling eyes, charisma-charisma-charisma, the gift of jibber-jabber and making people feel good…what the hell do I know about any of these people?  I mean, really?

Andrew Ferguson, in The Weekly Standard:

The premise seems to be that vein-popping ambition, unrestrained avidity, is a necessary if not sufficient quality for someone who wants to hold the highest political position in a democratic country.

Read them.  Then think about what we might do to change things.

Can we have a do-over?
Urban Dictionary:

elec·tile dys·func·tion :
The inability to become aroused over any of the choices for President put forth by either party during an election year.

Via: Tam for the quote, Les Jones for the cite.

I'm thinking [of voting] Cylon. I'm not so big on the “eradicate all humans” plank, but the cloning smokin' hot blondes is a platform I can support. [links added by o.g., purely for academic reasons]

OPEC's man in D.C.
Glenn Reynolds, posting at On Day One:

The next President should announce support for Robert Zubrin's Energy Victory policy that all new cars sold in the United States be flex-fuel vehicles that can run on ethanol and methanol.   Achievable for just $100 a car, this helps the environment and the third world poor, while helping to break OPEC.

I think Bush should do it NOW, or at worst before his term ends.  If it works as advertised and bankrupts the Saudis, Chavez, and the rest of OPEC, it will go down as the best thing he did in office, and I include Iraq in that assessment.

Sadly, the White House opposes the Zubrin plan because it's a “mandate,” notwithstanding that it would be far less intrusive -- and far more beneficial -- than the increase in C.A.F.E. standards.

How about:  Bush doesn’t want to hurt his post-retirement prospects with Saudi Arabia?

Chicago's most beautiful cat
The Tribune's RedEye has selected the 32 finalists for its first annual “Chicago’s Most Beautiful Cat” tournament.  (Several are shelter/rescue kitties. Hurrah!)  Here are five of the finalists:

First round voting is now through noon C.S.T. on January 31, with the “sweet sixteen” voting beginning immediately after.

View all the nominees and vote here.

More cat stuff: Didn’t know IndyFeral did a calendar, but they do and now it’s on sale.

Politically inconvenient
Claudia Rosett points out the sudden disappearance of Hesham Islam's Pentagon profile (turn on the lights, and the roaches scurry away).

Then there's the there-yesterday-gone-today speech at the State Department website (guess we can't handle the truth).

Seems the “memory hole” is alive, well, and living in Washington.

...what made this so impressive was that with the exception of the videos, which I thought were pretty dang good, all of this coverage came while the hotel was still burning.

...and posts some questions - and advice - for other newspapers.

American sur-reality
... or, what the hell were they thinking?
Great Moments in Marketing:

The Hershey Co. is halting production of Ice Breakers Pacs... 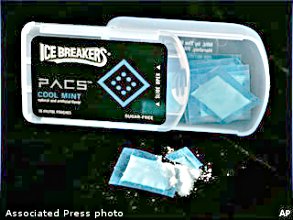 ...in response to criticism that the mints look too much like illegal street drugs... - Associated Press story posted at KOMO-TV

Nah, no resemblance at all...

My favorite headline of the year so far comes from The Daily Mail in Britain: “Government Renames Islamic Terrorism As ‘Anti-Islamic Activity’ To Woo Muslims.”
...
So, henceforth, any terrorism perpetrated by persons of an Islamic persuasion will be designated “anti-Islamic activity.”
...
[Which] should add a certain surreal quality to BBC news bulletins: “The Prime Minister today condemned the latest anti-Islamic activity as he picked through the rubble of Downing Street looking for his 2008 Wahhabi Community Outreach Award. In a related incident, the anti-Islamic activists who blew up Buckingham Palace have unfortunately caused the postponement of the Queen's annual Ramadan banquet.”

In other words, put up or shut up “Others have said they would personally be happy to pay higher taxes. I welcome their enthusiasm, and I am pleased to report that the IRS accepts both checks and money orders.” - SOTU