Before I left France, I attended my last Memorial Day ceremony at the Suresnes American cemetery.  Back a year ago, I was very very busy and was only a month away from moving permanently, but I absolutely wanted to take the time to go...

What we have is a failure to communicate
I swear, kids these days:

-I left a lot of messages on her Facebook wall.
-Facebook!  Facebook?  Why don’t you email her?
-No one has an email address, dad.
-Really?
-Well, they might, but they wouldn’t look in their inbox and answer you...
-Why don’t you call her on the phone?
-She’s like my friends.  She doesn’t know how to answer a phone.
-What do you mean?  They all have $500 phones.
-They don’t know how to answer them.
-How can that be?
-They all are iPhone type slabs and they have to lock them so they don’t butt-dial 911 and their mother twenty-five times a day.  They can’t unlock them fast enough to answer them.
-Well, why don’t you leave them a voicemail and tell them to call you back?
-Dad, they have no idea how to use voicemail.  All their mailboxes are full and have never been listened to.
-You’re making that up.

Also, why texting is not for communicating information...

Via Tam, who claims to have "sent maybe two dozen text messages” in her life.

Watch what you say
The Daily Mail:

The Department of Homeland Security has been forced to release a list of keywords and phrases it uses to monitor social networking sites and online media for signs of terrorist or other threats against the U.S.

The intriguing the list includes obvious choices such as "attack,” "Al Qaeda,” "terrorism,” and "dirty bomb” alongside dozens of seemingly innocent words like "pork,” "cloud,” "team,” and "Mexico.”

"Pork” is obvious: Just think of all those right-wing extremist "Porkbusters,” right...?

The Mail’s story has the complete list.  For future reference (and as a service to readers who might want to maintain a low profile), I’ve linked it in the sidebar: You’ll find The DHS Suspicious Words List in the Useful Stuff section.

Related:
The Register:   What are those words that trigger Echelon?

Clipfile - May 23, 2012
"This is the dark heart of leftist altruism: By submitting to the notion that you owe your wealth to others ‘less fortunate,’ (read: lazy bastards who make lousy life choices), you become their slaves.  That’s the bottom line to all leftist schemes: slavery.” - Bill Quick

The blanks: Filled in
FYI:  Roberta’s handy guide to completing the new form 4473.

While you’re waiting for all those contributions to roll in... 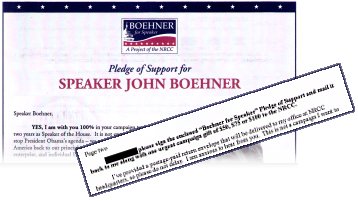 ...why don’t you get someone to look up Reichsfluchsteuer for you?

And then fuck you[1] and the horse you rode in on.

Reason: Eduardo Saverin And Echoes of the Reichsfluchtsteuer
Zero Hedge: "The land of the free has certainly fallen a long way.”
Perry de Havilland: I may have said this before...

You thought Jonah Goldberg was kidding about Liberal Fascism, didn’t you?

(Hey, it ain’t only liberals.)

...if we had any House leadership at all, Kathleen Sebelius would be called in front of Congress and the responsible HHS managers charged with illegal campaign contributions to Obama’s reelection effort.

But John Boehner is an intellectual and leadership lightweight...

STEPHANOPOULOS:  ...we saw a couple of senators, Senator Schumer and Senator Casey, yesterday introduce legislation about one of the Facebook founders, Eduardo Saverin, who's renounced his citizenship.  They say -- and they want to pass legislation that says anyone who renounces their citizenship should still pay all the taxes they owe and, if they don't, they can’t come back here.  Do you support that legislation?
BOEHNER:  Well, there’s already a law on the books, George, but this is outrageous.  This is absolutely outrageous.
STEPHANOPOULOS:  What’s outrageous?
BOEHNER:   That some -- that somebody would renounce their citizenship to avoid paying taxes.  Again, it’s already against the law.
STEPHANOPOULOS:  So you don't think you need this new legislation?
BOEHNER:  No, I'm not sure it’s necessary.  But...
(CROSSTALK)
STEPHANOPOULOS:  Would you support it if it is?
BOEHNER:  If it's necessary, sure, I would support it.

Tells you all you need to know, dunnit...?

Retro do-it-yourself
"RobotGrrl” over at Evil Mad Scientist Labs turned up a 60s-vintage Heath VT (as in "vacuum tube”) voltmeter kit.  So why not put it together?

(Have to check my parts cabinet, I may have that capacitor bracket she’s missing.)

We already knew that he wasn’t one...
Suspicions: Confirmed  Dept

The assertion that the polarization of American politics is entirely the fault of extremists who allegedly have pulled the Republican Party rightward... is both (a) untrue, and (b) a transparent effort by the Left to scapegoat its antagonists for a problem the Left and its Democratic Party allies have caused.

Do not permit yourself to be deceived by this humbug, and do not trust any "conservative” who cedes an inch to this vicious lie.

...we have an increasing number of legislators in both parties who have adopted an unrelenting partisan viewpoint...  Partisans at both ends of the political spectrum are dominating the political debate in our country. ... And I believe that if this attitude expands in the Republican Party, we will be relegated to minority status...

(Lugar quote via:  Dave in Texas)

The mask comes off
Not that this should surprise anyone...

Only global poverty can save the planet, insists WWF - and the ESA!

Clipfile - May 16, 2012
"There’s too much regulation, for too many lousy reasons.  If regulation isn’t clearly for the common good, it’s just bossiness — a deprivation of freedom for no good reason — and should be remedied by tar, feathers, and such other means as get the message across.” - Glenn Reynolds