Word of the day: Blockwart
Marko:

The next time you wonder how a nation of fastidious, orderly people could turn into the butchers of ten million Jews, gypsies, homosexuals, and other “undesirables”, think about what would happen if you gave the good Sergeant a machine gun instead of a ticket book, and you told him that an easy-to-identify segment of the population in his city has no human rights, and can be shot without legal penalty for not following orders instantly…

Voice of experience
And we pay these people?  Dept
Instapundit:

Seems like whenever the question is, “Did Congress screw up ——— ?” (for whatever  “———” you choose), you can usually answer “Yes” without further investigation.

I've been a full-time telecommuter for 15 years as of...hmm...actually...as of today!  But to get to the meat of the argument, I've never been treated as anything but a regular employee.  My office just happens to be 600 miles from corporate headquarters and I pay Indiana taxes instead of Maryland ones.  That's the only difference.

So I'm not sure how this would affect me, even if I were underperforming.

“Oh, pun!” sez he.  Dept
The search for Handel’s Messiah.

“Handel is the composer.  The Messiah is the piece of work that he composed. It’s one of the arguably most famous classical works EVER.  It’s a Christmas work.  There are flash mobs singing bits of it at malls.  Maybe you’ve seen it on youtube??”

She’s lucky they didn’t try to sell her a copy of Carmina Burana.

Next week, The Refrigerator Chronicles.

“Only One Hocking Day Till Christmas!”

Carols for another Christmas:

All new recordings by the original stars!

When you absolutely, positively, want to be politically incorrect:

Full-flavored smoking enjoyment in open defiance of Nanny-state killjoys, splashy holiday graphics in bright red and green, and Ronaldus Magnus Maximus his own self.

A copy should be hung on every cubicle wall (with care).  Just to bug ’em!

11 And there were in the same country shepherds abiding in the field, keeping watch over their flock by night. And they were doing a bit of knitting, like shepherds do, yea even their teatowel headgear was sustainably generated.

13 “We are sore afraid,” they said. “Have you any idea how much energy you're wasting with all this ostentatious glory-shining?  You could at least tone it down a bit using a low-energy halo.”

14 And the angel said unto them, “Fear not, for behold this halo is a low output, flicker free, non-stroboscopic Compact Fluorescent Integrated Glow-Ring.  For God phased out all the filament haloes in the heavenly firmament long ago.”

Deck the halls with lots of frivolity:

America is a place where people feel that if they can imagine it, they can make it come true.  Although that doesn’t always lead to success, the aggregate impact of all of that creativity on the country is tremendous.  Think about how many things that you know of that are so fundamentally unimportant from the perspective of surviving in this world, but impacted the lives of the people who invented them or used them. Silly Bandz.  The Snuggie. College apparel.  A dozen flavors of Coke.  Personalized M&Ms.  Car wrap advertising. Pet manicures.  Cheesehead hats.  QVC.  Having it your way at Burger King.  McMansions.  [Stick-on reindeer] antlers are the perfect example. They’re utterly frivolous, but they let people express the fun side of Christmas and maybe make others smile as well.

Whose Christmas can you make better, with a small effort, a kind word, a little encouragement?  If nothing occurs to you, maybe you should look a little harder.

You've heard the one, no doubt, about the golf-loving executive with the big, purring cat of a secretary who could honestly tell his wife he spent Friday afternoons on the lynx.

But that's beside the point.  Merry Christmas!

2 Merry Christmas!  Hope to see you in the upcoming New Year.

A very merry Christmas...
...to my readers, lurkers, and lookers-on. 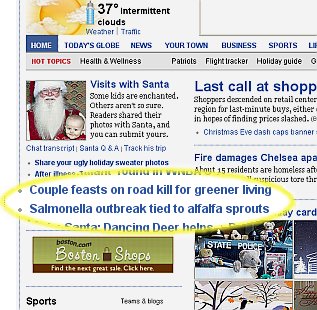 (Two headlines at boston.com, minutes ago.)

Ohh noes, not again!
“Nonpartisan” site turns out to be another lefty front.

(And in the comments:

...Right on cue this bloviated bullshit was on NPR this morning and front and center on front page of the St. Petersburg Times.

Well of course.  Isn’t that what these organizations are for?)

Firefighters who rescued people from a [terrorist-bombed] Tube carriage on 7 July 2005 were never given a proper debrief, it has emerged.
...
The crews who tackled the carnage at Russell Square - where 26 people died - were not asked their opinions of the event afterwards, the inquests heard.

The inquests have been told about rules which delayed the crews.

The first firefighters were told not to enter the tunnel where the carriage was without back-up or breathing apparatus... [which] led to a 29-minute delay.

Terrence Adams, a senior divisional officer, who was in charge between 1000 GMT and 1100 GMT that day, said nobody had asked him afterwards how the rescue had gone.

A lawyer for some of the victims’ families, Christopher Coltart, asked Mr Adams, who has since retired, if he thought this was an oversight.

“I can’t answer that question because that wasn’t my area of responsibility,” he replied.

Mr Coltart said: “Although the logistics department and the equality and diversity department had their say, there was no review upon the protocols which actively impacted upon entry into the tunnel on that day.”

When it comes to saving lives, what could be more important than diversity?

If the only thing Blake Edwards had done...
...was give Henry Mancini his first television job, we’d have plenty to remember him for.

Fortunately, there’s so much more.

Late gettin’ this one up...
...but there’s an Indy Blog•Meet this coming Sunday.

Two physics professors at the University of California, San Francisco, Leon Kaufman and Joseph Carlson, have concluded the x-ray backscatter machines (or what I refer to frequently as the Nude Scan-O-Matic) can be fooled.
...
Don’tcha just feel all better now about that flight out to visit Mom and Dad for Christmas?

But, Hey, it’s not for nothing.  Think of how many Congressmen and their families will have a Very Merry Christmas because of these things.

You see a number of people in Congress and their spouses have invested heavily in the companies that make these machines...

And it’s not just Democrats. Take your blood pressure meds, then RTWT.

Basically ever since the Patriot Act, visiting the US has become a huge pain for foreign tourists, and with our lovely new “we see you naked or we touch your private parts” strategy for airline passengers (thank you, TSA), it appears that things are getting even worse. So, if you're the US government, how do you respond...?

...You set up a “public/private partnership” to launch an expensive ad campaign and you fund part of it by charging those very tourists to enter the country.

I wonder how many Congressmen own ad agencies?