Welcome to Boston, Senators. Have some tea! (O.G. scribbles a few notes about What Happened and What It All Means. Links added and grammar & spelling corrected as time permits.) 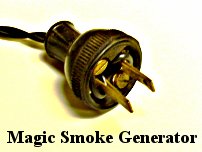 Mark Steyn "[A] textbook definition of "bipartisanship": both parties gang up on the electorate."
-----
here

Why do liberals like Sen. Dianne Feinstein, D-Calif., keep trying to tell the rest of us what political opinions we must listen to in the media?

Feinstein says she is “looking at” reviving the Fairness Doctrine to counteract the decidedly conservative bent of talk radio...

She wants to bring it back because she thinks “one-sided programming” pushes the American people into “extreme views” — such as their current opposition to the Bush/Kennedy/McCain immigration bill. She wants “an opportunity to present the other side” by forcing radio stations to offer more liberal fare.

What Feinstein really wants is for federal bureaucrats to decide what political opinion programming we should hear. She presumes to know better than listeners what is “fair.”

Dear me, examiner, so close-- but no cigar!

Anyone with half an eye can see that this is not about "fairness." It's about suppressing anything Feinstein doesn't like, by wrapping it up in bureaucratic red tape. Reimpose "fairness," and you can bet that the Usual Suspects will be right there, jumping in to make life miserable for the owners of any station that broadcasts anything that deviates in the slightest from the standard lefty-PC norm. Feinstein doesn't want "balanced programming," she wants station owners to throw up their hands and go back to playing Mantovani records.

Too bad examiner's editorialist lacked the guts to call her on it.