Orrin Hatch (!) joins Chris Dodd; backs Kennedy to replace Kennedy
Must Be Something In the Water  Dept
Boston Herald (via Jules Crittenden):

Sen. Orrin Hatch (R-Utah), a close friend of the late senator, publicly urged Vicki Kennedy’s appointment to the post, at least on an interim basis.

“I think Vicki ought to be considered,” Hatch said on CNN’s “State of the Union.”  “She’s a very brilliant lawyer.  She’s a very solid individual.  She certainly made a difference in Ted’s life, let me tell you.  And I have nothing but great respect for her.”

Demonstrating (yet again) that when the chips are down, they’re all part of the same political establishment.

Sunday morning reading - August 30, 2009
A few good ones you might have missed...
“Grass? There was no grass. We would have eaten it.”

Rachel Goes to Auschwitz, and experiences

...intensely upsetting moments of terrifying and physically sickening clarity, interspersed with tears, laced with disbelief and all surrounded by a general feeling of impotent but genuine strong rage.

This is one of the best posts I’ve read this year.  (As somebody else says, “she’s one hell of a writer.”)  If you saw it linked elsewhere and skipped it, well, go read it start-to-finish. • 4000 words, 16 photos


“Average people should not require advanced degrees in medicine and economics to make informed decisions in the voting booth.”

“Doctor Zero” begins with the Beck boycott, considers whether the President is racist, and touches on our political discourse, and why politics has become so important:

Calling any liberal a “racist” is the Avada Kedavra of political discourse, the Unforgivable Curse.  Admittedly, it seems like an unprovoked act of rhetorical aggression.  It’s not like Obama and his party have been running around calling everyone who disagrees with them racists, mindless drones, un-American traitors, Nazis, assassins, or Astroturf lawn gnomes who get their opinions from their corporate paymasters.  Oh, wait, it’s exactly like that.


“...if you’re famililar with anthropology- rather than with Rousseauian noble-savage fantasies...”

“LabRat” takes on a climate activist and some people’s ideas of “natural balance”... in one post:

There is something elementally appealing about end-of-the-world scenarios for idealists, because you don’t have to take any responsibility for the consequences of your ideas, no matter how horrific.
...
No plant or animal has any kind of mystical sense of balance or sustainability; to the degree that there ever exist balances in ecologies, they were not arrived at by cooperation, but by the point at which competing forces have reached a temporary detente.


“One dead in domestic dispute; fiance in custody.”

Some times all you can do is stand by and watch, helplessly. Senseless.

I had already filled out the recommendation for the Honors program, and submitted her name to the editor of the uni’s literary rag as a potential writer/editor. The last day of classes, she handed in her final, and I handed her the stack of paperwork for the Honors program. “Oh, I’m so flattered!” she gushed. “But I am transferring to Guido Barely Accredited Community College, back home. Brick misses me, and I don’t want to be too far away from him for another year.”


Not just a kitten.

Tonight I remember when Valerie asked me for this purebred Persian kitten.  She wanted a long-haired kitten and so our journey began.

When announcing the pizza program in 2010, President Obama had promised that pizza prices would fall, pizza quality would rise, and there would be universal access to pizza.  “After all,” he had said in his typical all-knowing manner that Americans have come to hate, “the pizza industry is much simpler than the medical industry, which we completely nationalized last year.”

And finally, from “Mycroft,” the square root of minus one.

How it goes...
Bill Quick on the latest Rangel:

It’s hard to recall just how many times accusations of wrongdoing have been leveled at lefty politicians, after which the MSM “investigates” the matter by interviewing the accused pol and then reporting “nothing to the accusations, the accused says the charges are ridiculous, untrue, and motivated solely by politics.”

The the MSM labels the matter closed.

It never seems to occur to these hacks and flacks that the motherfarkers are lying.

No Bill, it’s just step 10 of the usual process:

S.773 cybergrab bill resurfaces; changes only cosmetic
And it’s nice to know others are finally noticing.

First, the latest from Declan McCullagh:

Internet companies and civil liberties groups were alarmed this spring when a U.S. Senate bill proposed handing the White House the power to disconnect private-sector computers from the Internet.

They’re not much happier about a revised version that aides to Sen. Jay Rockefeller, a West Virginia Democrat, have spent months drafting behind closed doors. CNET News has obtained a copy of the 55-page draft of S.773 (excerpt [Note: contains Title 2 only - o.g.]), which still appears to permit the president to seize temporary control of private-sector networks during a so-called cybersecurity emergency.
...
Probably the most controversial language begins in Section 201, which permits the president to “direct the national response to the cyber threat” if necessary for “the national defense and security.”  The White House is supposed to engage in “periodic mapping” of private networks deemed to be critical, and those companies “shall share” requested information with the federal government.  (“Cyber” is defined as anything having to do with the Internet, telecommunications, computers, or computer networks.)

“The language has changed but it doesn’t contain any real additional limits,” EFF's Tien says.  “It simply switches the more direct and obvious language they had originally to the more ambiguous (version)...  The designation of what is a critical infrastructure system or network as far as I can tell has no specific process. There’s no provision for any administrative process or review.  That’s where the problems seem to start. And then you have the amorphous powers that go along with it.”

Translation:  If your company is deemed “critical,” a new set of regulations kick in involving who you can hire, what information you must disclose, and when the government would exercise control over your computers or network.

And a reminder: The Democrats’ favorite RINO, Olympia Snowe, has signed on as co-sponsor.

I’ve been following this one since April.  My first post was largely snark about the cluelessness of the bill’s sponsors, but it also spotlighted the measure’s less-noted licensing provisions.  Work on a network the government (not your employer) says is “critical”?  Get federal certification, or get unemployed!

My next two posts looked at a pair of suspiciously-timed front-page articles in The Wall Street Journal.  A little consent-manufacturing?:
April 8: Unnamed “officials” exploit the confusion between “a network” and “the internet” and “sabotage-by-hacking-in” with “an inside job” to paint doom-and-gloom scenarios while calling for more government control of private networks.  Meanwhile, the government’s own data reports that the number of “intrusions” on commercial systems is minuscule- and falling- when compared to the government’s.

April 22:  A good old spy story: Somebody nefarious pilfered some information- it’s unclear as to whether it was even classified- from both Defense Department and contractor-operated networks involving the Joint Strike Fighter project.  Used as a hook upon which to hang dire predictions of foreign penetration of infrastructure-related systems like air traffic control and electric utility power management.  Are the cybergrab advocates using government-network breaches as a pretext for mandating standards for private networks?  You be the judge.

Elsewhere:
Day By Day cartoon
Remember When Civil Libertarians Accused Bush Of Setting Up A Neo-Fascist Thugocracy?
Leftists Go All “Meh” Yet Again Over Obama's Policies
Now *that* shit needs to be stopped...
Bill text at THOMAS (at this writing, may not incorporate latest revisions)

Credit where due:
I first heard about this from Joanna, who got the word from this article by Steve Aquino in the April 2 Mother Jones.

Better technology: Not always the remedy
“It would seem that BD doesn’t solve the problem of Engrish.”

I mentioned to the local NBC-TV affiliate that the media seemed to be avoiding the fact that Chris, the well-known local libertarian with the rifle (and a sidearm), was black.  “Well, we’re not supposed to mention race if it’s not a key part of the story.”  My eyebrows shot up.  “You have a black man with a gun! At a rally for the black president! That’s not relevant?”  So she sheepishly admitted, with a chuckle, “Well, that would take away the whole redneck right-wing extremist thing.”  This is known in “news” circles as objective reporting.
...
Chicago’s WGN couldn’t believe we have the right to keep and bear arms out here.  I had to tell them most places have RKBA, a surprise to them in their little cloister.  “Do people shoot each other on the streets a lot?”  They actually asked that.  These folks aren’t in a bubble, they’re in a vacuum...

That’ll fix ’em!
Before we do healthcare, Mycroft wants to reform this first.

Related:
“Odd that everyone has to sacrifice except the Democrats’ biggest donors.”

Ooooh, those Cwazy Citizens!
OMigawd, they’re EVERYWHERE!  Dept
Newsweek:  Healthcare “reform” opponents victims of “mental processes that have gone off the rails.”
Washington Post:  And that’s not all! They wear funny clothes, too!
Well, calling everybody “racists” wasn’t working... 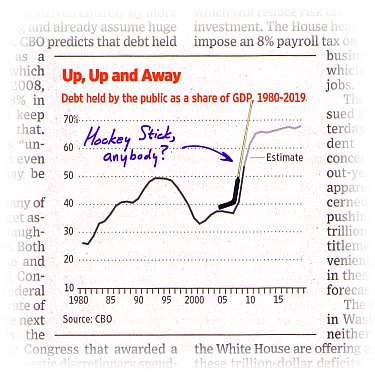 Chart (without snark) from this Wall Street Journal editorial.