This is your last chance.  If you blow this, I'm out and you need to be destroyed.

What is it?  Repeal ObamaCare on Day 1. Don't worry about replace, don't worry about anything else.  We will do everything we have to drag your sorry asses over the line this fall, including electing Mitt Fucking Romney. 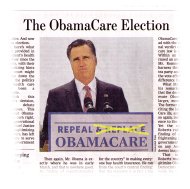 In return this is what you will do:

Instead of adjourning for pictures and tea and cake to celebrate getting your pathetic asses elected to 2 or 6 years on the government teet, you will immediately pass a one line bill that says, "The Patient Protection and Affordable Care Act (and whatever statute number has to be included) is hereby repealed."

That's it.  Nothing more, nothing less.

Since Congress meets before Inauguration Day, Obama will still be President.  Simply hold the legislation at the desk so the 10 day pocket veto clock doesn't start.  If other parliamentary BS is needed, just do it.

Then as soon as Mitt takes the oath of office, before his speech no one will care or remember, walk the bill up to him at the podium to sign.

If this does not happen, the GOP must be destroyed and a new party built to replace it.

...except, you know, for the popular provisions of a centralized, state-run, top-down authoritarian health care system run by bureaucrats.  Those could be part of a common-sense replacement program.  Offered up by Republicans.  Who really do care about clean air and vibrant senior citizens and the horrors of autism.  Really.  So says House leader John Boehner...

It’s been vicious out there for a long time...

The age when liberal academics could comfortably expect to see their dominance of the academy translate into a broad progressive consensus on the [Supreme] court are over.  We’ll be battling over the composition of the court for a long time—and if a liberal or conservative justice is forced to retire while the other party holds the presidency, I expect to see things get vicious indeed. - Megan McArdle

...who must have slept through both the Thomas and the Bork confirmation hearings.

Clipfile - June 17, 2012
"High energy bills... are no accident.  They are result of a very deliberate strategy by environmental pressure groups to make energy bills more expensive in order to force everyone to reduce their energy usage.  Of course, the people this hits hardest are the ones for whom reducing energy usage is not really a viable option: the old and infirm..." - James Delingpole

It’s a disgrace to the noble Lone Star Republic... that, when I visit there, I have to keep my gun burkha snugged around my body while walking the windswept parking lots of Amarillo in a way that I don’t when I’m walking through the Hoosier hippie enclave of Broad Ripple, because in Texas it's a crime if somebody accidentally sees my gun and here in Indiana the hippies can just piss off if they catch a glimpse of my heater.

Now if we could just do something about Indiana’s smoking laws...

LATER: In a comment, Josh K. reminds me that hoosiers still have some 4th Amendment-related housecleaning on our agenda for next November.

relayed by "momma” in a comment at Ace’s place (naturally!).

Wow, talk about a shout-out...

America was built on the principle that a man could make choices about his own life.  This has been a complete failure.  You remember when pioneers set out by themselves into the untamed frontier?  And you remember what happened to them?  That’s right: They all died.  Lacking a government to tell them how much soda to drink or salt to eat, they became too obese to run away from bears and mountain lions.  It’s a sad chapter in our history...

Clipfile - June 1, 2012
"Whenever you use ‘limit your liberty’ and ‘for your own good’ in the same premise, you have well-launched yourself down the path of tyranny and totalitarianism.” - Bill Quick