After a long a vicious battle [Democrats] are reduced to a choice between a member of a racist cult or a women who wouldn’t know the truth if it bit her.  So the solution is a member of a cult that does its upmost to suppress the truth?

Neither the Clinton machine nor the Obamessiah movement will accept Gore.  If anyone can make McCain look good it’s the Democrats.

An echo, not a choice

There he goes again

Rep. Heath Shuler, D-NC, sponsor of the bipartisan immigration-enforcement bill known as the Save Act (H.R.4088), said this week that Sen. McCain was calling Republican House members in an attempt to block the discharge petition that would force a vote on the bill on the House floor. - Mark Krikorian

Mickey Kaus reflects the thoughts of many:

Weekend project: European re-armament
Anyone for a gun drive?

Well, see, outside of major urban areas, Americans find the British belief that you get peace by giving up your guns extremely sinister.  Frankly, if the average Brit weren't so propagandized, charitable Georgians alone would raise enough donated firearms to rearm the British yeomanry.  Texas alone could rearm half of Europe without too much personal deprivation.  The problem is that you probably wouldn't know how to clean them, and abuse of good weapons is a sin for which we would not want to be responsible. - MaxedOutMama, on Euro-American cultural differences

(I found the idea of Georgians and Texans taking up collections to “rearm the British yeomanry” amusing; not that they wouldn’t do it, you understand, but because they would!  The quote itself is peripheral to the topic of MOM’s post, which is a response to a [UK] Telegraph column about Americans’ “desperate desire to belong.”  The whole thing is worth reading.)

Cat scan
Does this story reassure you? Or does it creep you out?

Maybe a little of each. 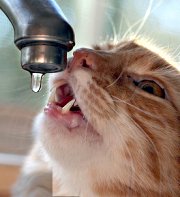 They all like to drink from the faucet, and Michelle has captured them doing it in a Flickr™ photo set.

Danger. (Slow) loading zone
When it comes to the web, I believe in paying for what I get, or, at least, allowing the creators of what I read to get paid.  So I don’t run programs like Adblock, nor do I have my hosts file configured to block every ad server under the sun.  I look at it as a bargain:  If some company is willing to place ads with a blogger I like, the least I can do is give them a glance.

The majority of my web access is by dialup. (Don’t ask. Just say, “thank you, AT&T, for your lovely, barely-maintained, 1930s-vintage infrastructure.”)  Page loading is slow enough under the best conditions; it can become interminable when some ad server or script server is m.i.a.  I get especially irritated when staring at a blank screen, with a progress bar stalled at 98%, while the browser waits on some widget to load, or for some javascript layout routine to execute.  Or when I try to open a link in another window, get a “can’t find the site” message, and then (after checking netstat) find out the reason the site can’t be found is because the browser can’t get to the DNS:  All of my connections are tied up by ad servers that should have released by now, but haven’t.

When this happens- or when there’s some annoying javascript distraction- I open up the “view source” window and search out likely suspects.  If I’m feeling charitable I may just note the problem.  But if it’s happened more than once, or I’m having a bad day, it’s “into the hosts file with ‘ya, and trouble me no more!”

So if you’ve got any of these folks hanging around your webpages, be warned.  They just might be chasing your traffic away.  And just minutes ago I added some more culprits to the list.  Thought you might want to know.

Or you could just blame the data, and then ask for more funding Ace explains a mysterious anomaly:

2) There is no additional heat in the oceans; in fact, they have cooled.

Conclusion:
The additional heat in the oceans must be hiding even deeper in the oceans, or gathering out in space, like an alien armada poised to destroy the earth.

Internet Explorer 8.0 and the Martian Headset Problem
The advent of Internet Explorer 8.0 prompts this terrific (long) article by Joel Spolsky that ties together the problems of manufacturing headsets on mars, defining “kosher” among the ultraorthodox, and finding your favorite menu command in Office 2007... and uses them to explain why you’re probably going to have to recode your web pages, again.