But of course!
Instapundit:

Well, if I could get the same health care plan that Congress gets, at the price that a Congressman pays, I’d be in favor of it, too. 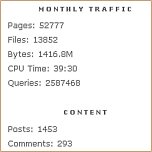 If you scroll way down the sidebar... no, keep scrolling... there!... you’ll find some Monthly Traffic stats that our host kindly makes available to us Mee-Nuvians.

As the goings-on on this page have always been primarily for my own amusement (besides being a device for keeping the old blood pressure under control), I’ve never indulged in any of the fancy traffic analysis tools that the web makes available. The idea of doing so seemed to present a risk taking things entirely too seriously[1]; not to mention offering the disturbing potential to discover things that might be better left undiscovered[2].

Who are all those people?

For a long time that monthly number has hovered around 30,000... say 1,000/day. And I know from looking at other sites’ information that one-half to two-thirds of that is most likely search engine spiders, botnets, spammers, and other miscellaneous automated rabble.  Deduct a reasonable amount (say 50%) of the remainder to account for obsessive refreshing of the main page by the author, and that still leaves several hundred real-live viewers who drop by on any given day.  Who appear to be a taciturn bunch, given that in just over 2½ years they have made just under 300 comments (by probably 30 unique commenters).

So for these last hours of November, I’m gonna call “ollie ollie oxen free,” and encourage you hitherto silent ones to test Mee-nu’s comment functionality.  Tell a bit about yourself, or just say, “hello.”  No registration or personal info required, just click the “Add Comment” link in the footer below and make yourself known, if only for today.

(But if you’re peddling handbags, athletic shoes, or replica watches... forget it.)


-----
[1]  Although at least one clever person has turned his periodic scan into a long-running series of amusing posts.

[2]  And BTW, visiting Tam’s “Ick” category can lead to a degree of morbid fascination that approaches uniqueness.

I'm a long-time shooter, part-time certified NRA and CCW instructor, who left a job of 21 years in August, due to health-related issues.  (I had been a credit card fraud investigator).

Been thru alot during the past few years, and I am considering starting a blog of my own.

Thanks for being out there...

2 In days of old, I had about 700 visitors a day; nowadays I have about 450 visitors a day and about 1000 taking the feed, though only 200 of them have bothered to set up formal subscriptions, to the extent that anything in RSS is "formal."

As you've seen, though, I have no trouble finding ten or twelve ridiculous search strings each and every week. 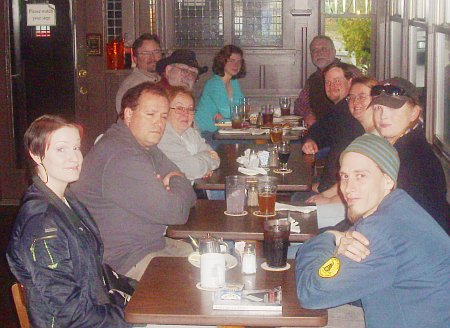 Not pictured:  Old Grouch (behind the camera), Roberta X (attending her family’s Thanksgiving, showed up later).  Present:  Most of The Usual Gang.
Topics discussed at our end of the table:  Whether Rock Star Beatles Version is cool or creepy, if Climatequiddick will make any difference, how many knives you routinely carry.

See you next month!

Sorry I missed.  Niece + prospective nephew in law came in for the day and had a transmission problem just before they got here.  So p.n.i.l. and I didn't make it to the range and by the time the 'meet rolled around we were otherwise engaged in home repairs.

Brigid looks sad.  Please advise her all of her regular readers are rooting for her, and enjoy her blog.

3 THX, George, but Brigid didn’t attend this one.  Blame me for not recording all the names; also blame me for anybody who looks like somebody else.

OOPS!  My mistake.  I hope the redheaded lady in the back is doing okay, and even though she wasn't present, I hope Brigid is doing better.  It certainly is wonderful to read her amazingly poetic musings... 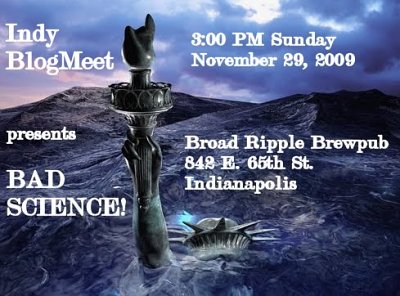 Thanks as usual to Roberta for getting a decision and providing a prize.

(I had had some hacked-together announcement art up for about 30 minutes, but Sherm’s is better, so I’ll save mine for a future occasion!)

What male reader of Ann Rice hasn’t exclaimed at some point, “Damnit, man, shut up and bite someone!”

I just wish they’d keep the blood and bodies out of my Science Fiction section.

1 Amen to that!  God, I wish the book stores would move all the vampire/werewolf/fantasy stuff to their own section and leave Science Fiction to Science Fiction.  The whole premise of SF is SCIENCE!  Not fantasy.

I do read fantasy, but I'd rather not have to wade through all of it just to find some good SF.

2 Say it with me, booksellers: par-a-nor-mal ro-mance. It should be its own section, next to the emo journals for suburban girls who pretend they have problems because it makes them feel special. And put it in front of the "how to leave your abusive spouse" books, because they're going to need those in about ten years.

Add another amen to this.  I was just in the bookstore on Saturday and was becoming exercised about this very thing.  Like Crucis says, get the fantasy dungeons and dragons crap out of the SF section, too.

Because nothing frightens a metrosexual more than a fertile woman
Children! Ick! Dept
Mark Steyn:

Did David Frum really say this about Sarah Palin? ...

This is a woman who has got into a position of leadership by sending very powerful sexual signals.  And we see that in the way that men like her much more than women do.

...
(By the way, when I saw her campaign in N.H., I was surrounded by moms with strollers.)

Oh, now I get it.  It was because the popular girls didn’t let you sit at their table during lunch.

Memories of WLS
...over at the pond.

I love you guys, each and every one. I'm going to drive around and give everybody a great big hug...

You have been warned.

1 I think she's punchy from lack of sleep!

There I was, stuck in the 60s with (or without) you
What with loose connections (not to mention all of last week’s breast- (and.brow-) beating[1]), come Sunday afternoon shortly after 3pm I showed up at the Infamous Brewpub to discover... well, nobody; excepting me, a few traditional Ripple types, and the Pub staff.  “Well, OK,” said I, “no bloggy conversation today, but [checking list] hmmm... there’s a stout which needs sampling.”  Which produced a decision to adjourn to the taproom (with its leaded-glass windows looking into the brewery) for a late lunch/early dinner.

The other customers were couples obviously uninterested in conversation with strangers, and, as the staff hadn’t yet turned on the football,[2] I found my moments sampling the stout[3] and waiting for the soup[4] accompanied by staring into space and half-listening to the Pub’s background music (played loud enough to listen to, but not so loud that it’s impossible to ignore).

Now a part of my radio experience includes almost-daily shifts at a top-40 operation from early 1967 to late 1969.  So it’s with a certain amount of confidence that I place the Pub’s playlist at 1969 (including some recent goldies).  The scary thing is that every track I heard for the hour or so I was there were ones that I’d spun on 45s, back when:  Happy Together.  Pleasant Valley Sunday.  California Dreamin’.  (Except for American Woman, they used the album version for that one.)  One after another, including some I hadn’t heard (or thought of) since the 70s.  But all recognizable, despite the Pub’s (or, more likely, their music service’s) strange audio processing (Did you know Creeque Alley is really a capella?  Sure sounded like it!)

After a while, it turned into a bit of a game.

If someone wanted to create an “Auld Hippie” channel, they could do a lot worse than start with the Pub’s playlist:  Add a touch of the psychedelic stuff, say Incense and Peppermints, a track or two by Donovan (Wear Your Love Like Heaven?); some post-White Album Beatles, the Fifth Dimension’s Age of Aquarius/Let the Sun Shine In (but not Up, Up, and Away).  Oh, and Light My Fire.[4]

I wonder about what it’s like for the Pub employees.  When I was their age, it would have been like working in a place that played Glenn Miller records all the time.

For me, well, it left me feeling 40 years younger.  And I’m seriously considering going back to see if I can con some sucker body into a “name that tune” contest.


------
[1]  ...of which I may have some thoughts anon (Executive Summary: New players, not a new argument), but that’s for later.  [ALSO: The links are sort of indirect; I’m sure that if you want to rehash the whole shoutin’ match you can figure out how.  And let it be said- just so nobody misunderstands anything- the association of any particular word with any particular link in the above is, if not “purely coincidental,” done with no intent to indulge in any “hidden” commentary.  (I’m not smart enough for that!)  Sheeesh!]

[3]  Susie’s Sweet (sweeter and chocolatier than Taddy, and worth a second round)

[5]  No, the original, not the Feliciano cover version. Getouddahere!

1 The version of "Creeque Alley" in general circulation is the LP mix, which lacks several of the instruments that could be heard on the 45; even with proper stereo phasing, something you may not always find in drinkeries, it comes off as rather minimalist, even drab.  Unfortunately, the 45 master is long gone, as is the case for rather a lot of Sixties stuff on the Dunhill label; in the rare instance where the correct version appears on a CD, it's mastered from an actual 45.

And besides, everybody knows the *real* threat is alien invasion, or maybe alien abduction, or alien something or other...

The Federation is “a non human NATO type organization”, of Greys, Reptilian, Insectoid, Moth men, (recessive beings like the ones in the movies…There are about 42 different type species of military males in various bases in the United States).  Some of the reptilian bases are in the USA AZ, NM.  You can find more information on these Orion beings and non earth, non humans discussed in thousands of contact books, and thousands of internet sites, (I’m not the only one who has been abducted).  These humanoid beings lie, and manipulate you until the point of near mental and physical breaking.

Are you ready for the terrible truth (via somebody[1])?