Sunday blogmeet report -- with pictures -- over at Brigid’s. 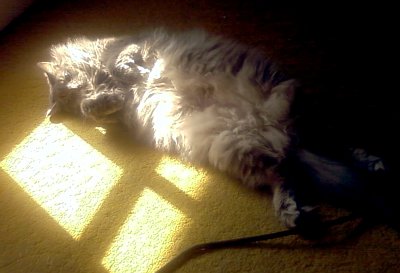 1  A solar powered cat is a happy cat.

So, Senator Feinstein, which is it?
Political Hacks  Dept

The Senate Intelligence Committee was briefed this week on the willful violations by the NSA’s inspector general’s office, as first reported by Bloomberg.

‘‘The committee has learned that in isolated cases over the past decade, a very small number of NSA personnel have violated NSA procedures — in roughly one case per year,’’ Sen. Dianne Feinstein, the California Democrat who chairs the committee, said in a statement Friday.

Of course, this is the same Dianne Feinstein who, exactly a week ago, said the following:

As I have said previously, the committee has never identified an instance in which the NSA has intentionally abused its authority to conduct surveillance for inappropriate purposes.

Yeah.  Because apparently the NSA chose not to tell the committee until a few days later, despite it happening for years.
...
In the meantime, the NSA just made Senator Feinstein look like a complete fool...  At this point, it’s abundantly clear that Feinstein’s ‘‘oversight’’ of the NSA is a joke.  She’s either incompetent or lying.

The country’s in the very best of hands...

What:  Not-exactly-a-blogmeet.
When:  Sunday, 3pm
Where:  Broad Ripple Brewpub
Why:  Why not?
So gnow you gnough...

I could almost support giving the NSA wide latitude if one condition were present:

That, in theory, could keep this very dangerous and worrisome ability in check.

But it's only a theory, because as John Kerry and Eric Holder and Barack Obama demonstrate on a daily basis, The government never fires or disciplines anyone, no matter how serious or deadly or constitutionally-foul their transgressions.
...
So we're left with a very unsatisfying choice between ‘‘Let the NSA run rampant’’ or ‘‘Let terrorists run rampant.’’

And at this point, I believe I’m almost ready to prefer the terrorists.

Meanwhile, over at the State Department...

After a Thorough and Searching Review, there was No Negligence, Nobody was Responsible, Everybody’s Back To Work...


...and four Americans are still dead.

Not ‘‘incompetence,’’ intent
Liars All the Way Down  Dept

COMPETENCE:  Report: NSA doesn’t know the extent of Snowden damage.  ‘‘The National Security Agency (NSA) doesn’t know how much information leaker Edward Snowden was able to obtain because of an underdeveloped capacity to audit its own data, according to a NBC News report released late Tuesday.’’

This is criminal.  Every single thing he did should have left an audit trail, both as a guard against misuse, and for damage assessment in a case just like this.

I didn’t say ‘‘criminal incompetence,’’ because if the need for an audit trail is obvious to such as me, it surely must have been obvious to higher-ups at NSA.  If the systems lack the capacity for this, it’s because somebody doesn’t want the records kept.  That suggests abuse at a systemic level.

No, it suggests a system that’s working as designed.

Electronic Frontier Foundation:  DEA and NSA Team Up to Share Intelligence, Leading to Secret Use of Surveillance in Ordinary Investigations
The Hill:  Report: IRS agents were instructed to alter details of DEA investigation
And read this:  They Know

Get ready for the DHHS SWAT Team!
Its called ‘‘evidence-based home visits...’’


According to an Obamacare provision millions of Americans will be targeted.

The Health and Human Services’ website states that your family will be targeted if you fall under the ‘‘high-risk” categories below: ‘‘...the new statute, by its own definition, has no... limitation.  Intervention may be with any family for any reason.  It may also result in the child or children being required to go to certain schools or tak[e] certain medications and vaccines and even having more limited – or no – interaction with [their] parents.’’

Well, at least we now know what all that ammunition.is for.

Clipfile - August 14, 2013
‘‘If it takes a thousand whistleblowers going to Moscow, Beijing, and Tehran to get the truth out to the American people, then so be it.  None of those three are any greater threat to our liberties... than the tyrants in our own government.’’ - Bill Quick


Ann Coulter:  Yes we should revitalize the Republican Party.  I’ll tell you who to throw out – Any Republicans who support amnesty.  You have a clear list Tea Partiers...

Sean Hannity:   Oh, so is the love affair with Chris Christie over?

Ann Coulter:   Sadly, over amnesty.  And, by the way, that’s when the love affair ended with George Bush.

Tacitus tells off Peggy Noonan
Meaning we can scratch HIM off the list...

1 Perhaps I'm missing the context, but Chris Christie was clearly a RINO all along; what we fell for was the austerity diet he fed to New Jersey's educational establishment -- and mostly we fell for it because of the adversarial way he did it.  The clues that he was not a true Hayekian were somewhat obscured by that, but they were there for anyone to see if they could get past their joy in seeing the teachers get theirs.

3 That part I got, I guess I should have said which context I meant...I didn't remember Coulter going all gaga over Christie.  But now that you mention it...