Clipfile - September 30, 2013
‘‘...While the fight... [may appear to be] between Democrats and Republicans [or between] Republicans [and] Republicans, the real battle is between the permanent political class and the people who create the wealth these leeches confiscate it from.’’ - ‘‘DrewM.’’

‘‘If only Comrade Stalin knew what is being done in his name’’ Mark Caputo, The Miami Herald:

At one point, a member of the audience, Andrew Rothberg, had his Galaxy Note II smartphone taken from him by security, which removed his picture of [Hillary] Clinton onstage and then gave his device back in front of a Miami Herald reporter in the auditorium stands.

‘‘That’s American politics,’’ said a docent, one of a handful of hotel security and volunteers who roamed the aisles looking for people taking pictures or making recordings.  None was allowed.

‘‘I wanted to take pictures for my girls; I have four girls,’’ Rothberg, who was writing a piece about the conference for Boca Raton-based Grey Matters Magazine, told the Miami Herald.  ‘‘I think Hillary Clinton who is probably running for president in 2016 would want all the publicity she could get and I think it’s kind of ironic they would take the camera away.’’

Rothberg said he was more puzzled than upset.

True believers simply can’t imagine that the objects of their adoration might actually be thugs.

He’ll probably vote for her, anyway.


Via: Twitchy via Insty.

Where movies *were* movies
Gizmodo:  Inside the Restoration of Brooklyn’s Glamorous Temple of Cinema 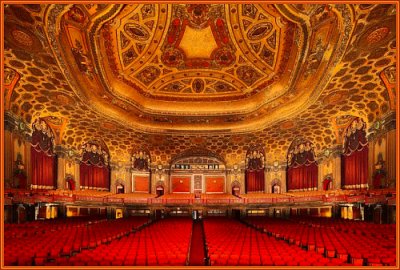 Gothamist:  FINALLY: The Loew’s Kings Theater Is Really Coming Back To Brooklyn!
Entry at Cinema Treasures.

Hah! Told you so!
Two days ago:

If the globe isnt warming, does that undercut EPA regulation of carbon dioxide? 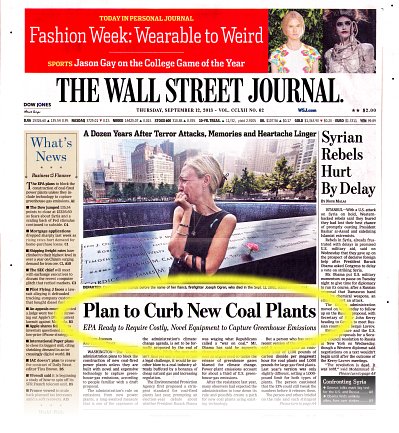 And will the Useless Party do anything about this?

No.  Because: Shut Up!  Also their cagey, political-positioning rope-a-dope strategy.

Clipfile - September 12, 2013
‘‘I think marches on Washington are good.  It’s helpful to remind the political class that they are outnumbered.’’ - Glenn Reynolds

Observe the ruling class, celebrating its own Breitbart:

Former Florida Gov. Jeb Bush (R) will honor former Secretary of State Hillary Clinton with this year’s Liberty Medal from the National Constitution Center.  The award will be presented to Clinton on September 10th, the eve of the first anniversary of the terrorist attack on the United States mission in Benghazi that killed four Americans.

... Bush... is chairman of the board of trustees of the National Constitution Center located in Philadelphia.
...
Bush’s decision to honor Clinton, who is considered by some to be a likely Democrat candidate for president in 2016, was condemned by the Independence Hall Tea Party Association of Philadelphia.

Something to remember when this guy runs for president.

Because that’s the *excuse*, not the *reason*
By any means necessary  Dept

Tam takes one for the team
Book Review: Christian Nation

Put that blurb on the cover; I dare you!

Provincialism, thy name is Manhattanite.

In 2010, the bestselling atheist Richard Dawkins, in the ‘‘On Faith’’section of the Washington Post, called the pope ‘‘a leering old villain in a frock’’ perfectly suited to ‘‘the evil corrupt organization’’ and ‘‘child-raping institution’’ that is the Catholic Church.  Nobody seemed to mind very much.

Three years later, in a throwaway Tweet, Professor Dawkins observed that ‘‘all the world’s Muslims have fewer Nobel Prizes than Trinity College, Cambridge.  They did great things in the Middle Ages, though.’’  This time round, the old provocateur managed to get a rise out of folks.  Almost every London paper ran at least one story on the ‘‘controversy.’’  The Independent‘s Owen Jones fumed, ‘‘How dare you dress your bigotry up as atheism.  You are now beyond an embarrassment.’’  The best-selling author Caitlin Moran sneered, ‘‘It’s time someone turned Richard Dawkins off and then on again.  Something’s gone weird.’’  The Daily Telegraph‘s Tom Chivers beseeched him, ‘‘Please be quiet, Richard Dawkins, I’m begging.’’
...
None of the above is Muslim.  Indeed, they are, to one degree or another, members of the same secular liberal media elite as Professor Dawkins.  Yet all felt that, unlike Dawkins’s routine jeers at Christians, his Tweet had gone too far.  It’s factually unarguable: Trinity graduates have amassed 32 Nobel prizes, the entire Muslim world a mere 10...  Yet simply to make the observation was enough to have the Guardian compare him to the loonier imams and conclude that ‘‘we must consign Dawkins to this very same pile of the irrational and the dishonest.’’...

What Dawkins is getting at is more fundamental than bombs or burqas.  Whatever its virtues, Islam is not a culture of inquiry, of innovation.  You can coast for a while on the accumulated inheritance of a pre-Muslim past — as, indeed, much of the Dar al-Islam did in those Middle Ages Dawkins so admires — but it’s not unreasonable to posit that the more Muslim a society becomes the smaller a role Nobel prizes and translated books will play in its future.

Left unanswered:  Given Islam’s present direction, why the western liberal intelligentsia - many of whom would be first against the wall in any Islamized society - should be rushing to defend it.  Quoth Steyn again:

It’s creepy and unnerving how swiftly the West’s chattering classes have accepted that the peculiar sensitivities of Islam require a deference extended to no other identity group.

‘‘Whistling past the crocodile,’’ perhaps?’’

Lightning on the horizon
Batten Down The Hatches!  Dept

While the world was glued to the developments in the Mediterranean.., Poland took a page straight out of Rahm Emanuel’s playbook and in order to not let a crisis go to waste, announced quietly that it would transfer to the state - i.e., confiscate - the bulk of assets owned by the country’s private pension funds... without offering any compensation.  ...While a change to state-pension funds was long awaited - an overhaul if you will - nobody expected that this would entail a literal pillage of private sector assets.

But why is Poland engaging in behavior that will ultimately be disastrous to future capital allocation in non-public pension funds (the type that can at least on paper generate some returns as opposed to ‘‘public’’ funds which are guaranteed to lose)?  After all, this is a last ditch step which no rational person would engage in unless there were no other option.  Simple: there were no other options, and the driver is the same reason the world everywhere else is broke too - too much debt.

By shifting some assets from the private funds into ZUS, the government can book those assets on the state balance sheet to offset public debt, giving it more scope to borrow and spend...
...
And of course, once Poland borrows like a drunken sailor using the new window of opportunity, and maxes out its new and improved limits, it will have no choice but to confiscate more assets, and to make its balance sheet appear better, until one day, there is nothing left in the private sector to confiscate.  At that point the limit itself will have to be legislated away, and Poland will simply continue borrowing until one day there are no foreign lenders willing to take the same risk as the nation's private pensioners.  At that point, Poland, which is in the EU but still has the Zloty, can just go ahead and monetize its own debt by printing unlimited amounts of its currency.

Of course, we all know how that story ends.

Prediction: This may be the first, but it won’t be the last.

[And there’s more to the story, so Read the Whole Thing.]

1 I keep telling the wife not to gaze too lovingly at those 401(k) statements.  She won't listen.