Clipfile - February 22, 2014
‘‘Regardless of ideology, no ruling class is all that happy to see the bums thrown out.  Because they’re bums, too.’’ - Glenn Reynolds

After more than 40 years, ‘‘The Tonight Show’’ is leaving Southern California and heading back to New York...
...
‘‘I’m old enough to remember when I was in New York and I was a kid, it was, ‘‘Oh my God, the ‘Tonight Show’s’ leaving New York and going to Los Angeles,’ ’’ [Jay] Leno recalled, sitting in the green room next to his studio.  ‘‘It seemed like the most glamorous thing in the world.’’

Things change. New York — a safer, more prosperous city than it was in the 1970s — has solidified its standing as the nation’s media capital, with most of the major news and talk shows originating there.

‘‘‘New York is the bustling city and blah, blah, blah,’’ Leno said.  ‘‘All the excitement’s there, all the movie studios, they start their big campaigns in New York.  So now it’s going back.’’

1 Give Bill Blasio a few years and they'll be moving it back to LA.

Who, Us?
Never let the facts get in the way of The Narrative  Dept

The Gwinnett County, Ga., Democrat party tweeted a shot taken in Atlanta during its snow storm of the jammed, unmoving Atlanta interstate with the caption, ‘‘When you spend more than a decade electing people who don’t believe government should exist, don’t get upset when there isn’t one to plow your exit.’’ 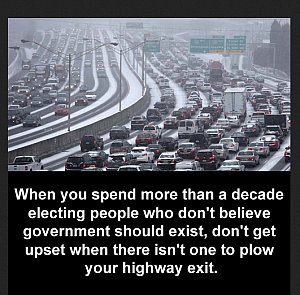 Which is amazing because Atlanta has been governed by nothing but Dimocrats for 70 years.

That's a stupid straw-man argument anyway, since most conservative and libertarian types would likely agree that somebody has to clear the snow and that economies of scale argue for city/state services to do that kind of thing rather than "I'll dig out my 50 feet of frontage if you dig out your 50 feet.  And I'm only digging to the middle of the street -- the guy on the other side is on his own."

But when your only tactic when faced with serious budget-cutters is to punish taxpayers by first cutting back on the services that people find useful and worth spending public money to support, and then piously blaming all the resultant sturm und drang on the other party, I guess this is the kind of stupid, self-serving meme that you try to perpetuate in order to save your phoney-baloney jobs.