Clipfile - May 24. 2013
‘‘...Elitism has never been an important concept in American life, and racism is on the way out.  And the only people who are interested in keeping these ideas around are liberals, who need to prop up these demons in order to give more power to the state.’’ - ‘‘Saint Croix,’’ in a comment at Althouse’s

All in the game? ‘‘One thing we have learned from the IRS scandal is that sports journalists are morally superior to political journalists.  Whereas the former understand that cheating is an assault on the basic integrity of the sport, the latter all too often treat it as if it were just part of the game.’’ - James Taranto

...and in sports journalism, the ‘‘homers’’ usually aren’t allowed to pretend they’re objective. 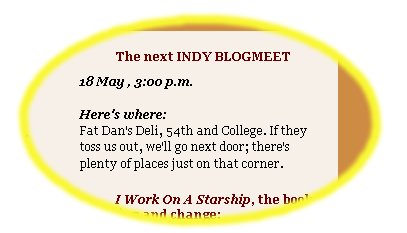 2 Best to start by looking for the pair of tall blondes (that would be Tam and Roberta)... pictures . pictures . more pictures. As you can see, a most sinister bunch!

BTW, there appears to be some confusion on the day. Latest report is it's still the 18th, but the 18th is on Saturday this month.

Clipfile - May 12, 2013
‘‘Don’t mistake the moral flaccidity of the intelligentsia for the fiber of the American people.’’ - Bill Quick

Clipfile - May 11, 2013
‘‘Some time after the Second World War the growing federal bureaucracy became more and more populated by mandarins whose primary skill was navigating said bureaucracy, while increasingly efficient political party machinery ensured that the people selected to run for office were picked for no criteria other than electability:  We are ruthlessly selecting for barnacles and jellyfish.’’ - Tam


We have been abused by everybody, the entire establishment, and now they are shocked and stunned that we are getting over 25 per cent of the vote everywhere we stand across the country. - Nigel Farage, leader, UK Independence Party

The latest Rasmussen Reports national telephone survey finds that just 30% of Likely Republican Voters believe Republicans in Congress have done a good job representing their party’s values over the past several years.  Sixty-three percent (63%) of GOP voters think congressional Republicans have lost touch with the party’s base..

[Mitt] Romney lost because he did not appeal to the millions of Americans who have seen their standard of living decline over the past decades...  When Romney did not address their concerns, they either voted for Obama or didn’t vote at all. - Byron York

Twenty-nine percent of [U.S.] registered voters think that an armed revolution might be necessary in the next few years in order to protect liberties, according to a Public Mind poll by Fairleigh Dickinson University. - CNS News

Clipfile - May 1, 2013
‘‘What an evil, to put a senator in the position of having to choose between his supposed constituents (the voters), and his actual constituents (the media and the Sunday morning shows that no one watches anymore).’’ - Ace