Clipfile - April 30, 2011 “In order for a man to love his country, his country ought to be lovely.” - Jerry Pournelle, reflecting on our latest “patriots”-working-for- the- Department-of-Homeland-Security outrage.

So I was at the gym when they finally caved and released the birth certificate – and on both the Fox and the CNN monitors I saw Donald Trump, who quickly started talking about . . . gasoline prices.  See, he knows how to keep the pressure on.  Other GOP candidates might want to take a lesson.

According to projections made by the Energy Information Administration in April 2010, the Gulf of Mexico should have produced 1.84 million barrels of oil a day in the fourth quarter of 2010.  Instead, according to the most recent EIA estimate, due to the Obama permitorium, the Gulf only produced 1.59 million barrels.  That is 250,000 barrels a day in lost production.  Overall, since Obama instituted his drilling moratorium, oil production from the Gulf is down more than 10%.

Shell Oil Company has announced it must scrap efforts to drill for oil this summer in the Arctic Ocean off the northern coast of Alaska.  The decision comes following a ruling by the EPA’s Environmental Appeals Board to withhold critical air permits...

Shell Vice President Pete Slaiby ...[is] especially frustrated over the appeal board’s suggestion that the Arctic drill would somehow be hazardous for the people who live in the area...  The closest village to where Shell proposed to drill is Kaktovik, Alaska... 70 miles away from the proposed off-shore drill site.

The Environmental Protection Agency will more closely regulate the use of diesel fuel in a drilling process used to recover natural gas...

A three-inch lizard that thrives in desert conditions could shut down oil and gas operations in portions of Southeast New Mexico and in West Texas, including the state’s top two oil producing counties.

Called the Dunes Sagebrush Lizard, it is being considered for inclusion on the federal Endangered Species listing by the U.S. Fish and Wildlife Service...

Mr. Obama urged Congress Tuesday to immediately eliminate what he called “unwarranted” tax breaks for oil companies...  The White House move came a day after House Speaker John Boehner said oil companies were partly to blame for high gas prices and cutting their tax breaks was “certainly something we should be looking at.”

Yet another anniversary...
Meryl’s 10th was Friday.
Related:
The ten-years-and-nothing’s-really-changed news briefs

Executive summary:  A Good Time was Had By All.

“Conclusion: We take children far more seriously than we do adult Democrats.”
Stands to reason Dept
In the first comment, in response to this:

Why do these people, many of whom are professionals, feel no fear in expressing such death wishes in the open?

One of the sad facts and a direct result of the work done by PETA and various Humane Societies is there is no longer a good or satisfactory way of deposing of a horse if you can no longer afford to feed it.  It used to be a horse could be sold for slaughter to be used in pet-food, but that was deemed politically incorrect and both federal and various state legislatures have outlawed the practice of horse “slaughter.”

...The end result is always the same....starving animals that no one wants.

Also applies when a horse is too old and feeble to be kept.  Read the whole thing. 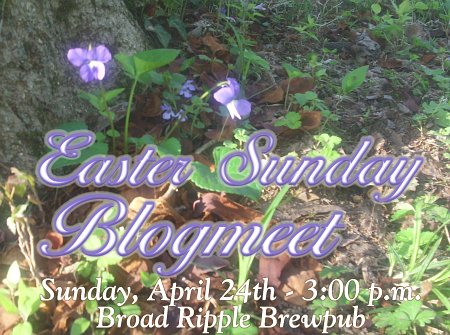 Thanks to Roberta X for coordination, as usual. 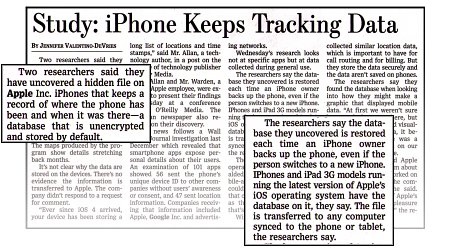 Elsewhere:
The Register:
Cops refuse to say if they secretly snarf cellphone data
iPhones secretly track ‘scary amount’ of your movements
Chizumatic:  I am in ur phone, logging ur position
The Corner:  Apple is Logging and Storing All Your iPhone’s Location Data