One topic sure to be up for discussion:  Is “blog meet” one or two words, and, if one, should it be BiCapitalized?

Thanks to Roberta X for making arrangements, and for creating the graphic.

Most of a brand’s sales came from loyal customers, and a very few loyal customers at that. In any single supermarket, for even giant brands like Folgers or Charmin, the destiny lay in the purses of about two hundred customers. Across two hundred stores, therefore, the fate of, say, Kellogg’s Frosted Flakes lay in the hands of about five thousand housewives—out of a customer base of about four million shoppers. If something were to happen to that loyal base—if some mysterious disease were to kill all of them—the brand would die, within a matter of weeks.

“So, how long have you been with the Bureau?”
Wherein it is demonstrated that not much gets past Roberta X.

Put very simply: John McCain is a liar.  He’s a man without honor, without integrity, who could not have captured the Republican nomination had he run on making comprehensive immigration a top priority of his administration.  Quite frankly, this is little different from George Bush, Sr. breaking his “Read my lips, no new taxes” pledge, except that Bush’s father was at least smart enough to wait until he got elected before letting all of his supporters know that he was lying to them.

Under these circumstances, I simply cannot continue to support a man like John McCain for the presidency.

McCain’s problem all along has been that people don’t trust him. His flip-flop-flip on immigration is the canonical reason why. 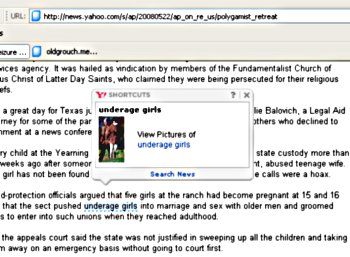 The import process was creating duplicate category entry records with every pass - and it was running every 15 minutes. Then it was carefully updating all those duplicate records. After a few days, that started to add up... - our proprietor