And then there’s always the BCS

Try a Rose Bowl game between Northwestern and Oregon State...

Not that I expect this to stop anyone

It might, however, hold the potential for eventually ruining someone’s day.

LATER:
• More explicit legalese available here.
• BT Internet subscribers wondering what this is all about might want to begin with this briefing.
Via:  The Register, which notes that you won’t read about this in the BT forums.

Our “best and brightest”?

Are You Smarter Than a Politician?

Of the 2,508 people surveyed, 164 say they have held an elected government office at least once in their life.  Their average score on the civic literacy test is 44%, compared to 49% for those who have not held an elected office.  Officeholders are less likely than other respondents to correctly answer 29 of the 33 test questions
...
Not all officeholders do poorly, of course.  Some elected officials rank among the highest scorers.  But the failure rate on the test among those who have won public office is higher (74%) than among those who have not (71%)...

Could quibble over some of the topics tested (and not tested), but the picture isn’t a pretty one. The test is here. 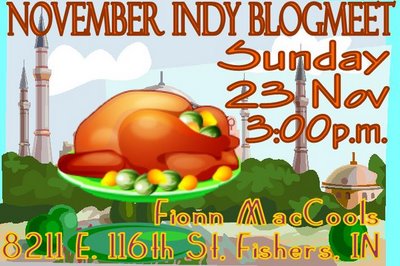 Joint meet up with the AoSHQ morons!  Details here.

...the Biscuit Belt has gone from feast to famine practically overnight.

...IF you can believe two contradictory things at once.


Say, this looks like an excuse for another animated GIF...

1 There was a magazine article last summer (in, of all places, The New Yorker) about the contradictory observations of volunteers in community food banks. Among other things, they were troubled by the number of fat and obese people who showed up for free food. This was particularly true at food "give-aways", where patrons would queue up before the doors opened. Some of the volunteers remarked that it looked more like a line to get into Weight Watchers for the weekly weigh-in.

And speaking of The Wall Street Journal...
...I’m just pleased as punch[1] to see them doing their part to advance the “politics of envy.”

Suspicions: CONFIRMED
In a Wall Street Journal oped in which he enumerates some potential problems for the upcoming Obama administration, Karl Rove lets something slip:

Lawmakers dislike grass-roots lobbying by those representing people in their states or districts.

Taken in isolation, I might take this as a reference to “community organizers,” the Jesse Jacksons or Al Sharptons who seem to be forever popping up to claim a share of spoils in the name of some group with a grievance. People who are very noisy, very good at recruiting a crowd for a demonstration, but whose actual depth of support is difficult to determine.

But Rove says this in the context of using the Obama campaign’s existing e-mail list as a tool to mobilize known Obama supporters to push for the Obama administration’s agenda. Which is something quite different.

You certainly can’t label any pressure on Congress produced by some mass mailing to known Obama supporters as “astroturf.” Congress would be hearing from real people who would, presumably, have a some interest in the issue at hand (even if their only interest was the desire that the new President get what he wants).  This is in no way different from the existing letter campaigns that are orchestrated by everyone from Greenpeace to the National Rifle Association.

Which leads to what I believe what Rove actually means:  Congress dislikes orchestrated campaigns by special interests when they involve stirring up Congressional constituents.

Well, I can understand that.  Once people start paying attention to what you’re doing, they may not like what they see.  And their dislike may turn into “no” votes next election.  Better for the interest groups to let sleeping dogs lie.

But isn’t accountability one of the things that Congressional service is supposed to be about? 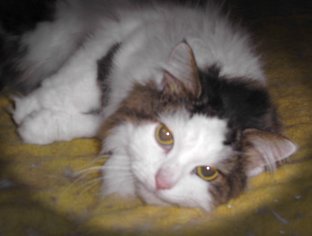 Too many good cats have been lost this fall.

Do you have some more pix of Frank that you could bring to the blogmeet? Lots of cat lovers are sure to be there.

And, again, my condolences.

Oh, Grouch! So sorry. And so young, too!

3 That look is priceless.

We are all better for having seen it, I believe.

(Just ten?  He was just getting warmed up.  Poor fellow.)

4 I'm sorry to hear of the loss of your friend.

5 Thanks all for your thoughts.  He’d been “not up to par” for a while, but had received a clean bill of health from the vet less than a week ago, which made it all the more distressing.  He’ll be missed.

“I hope none of y’all are science majors.”
Scenes from chem lab.

Service resumed
Apologies for the interruption.

Then, spent the next three days away from internet service, eating too much.good.food, visiting the Schmidt Museum, and prowling through a store full of used books.

More to come, after I get things caught up. Meanwhile, here's a picture of a 100+-year-old Gingko biloba. 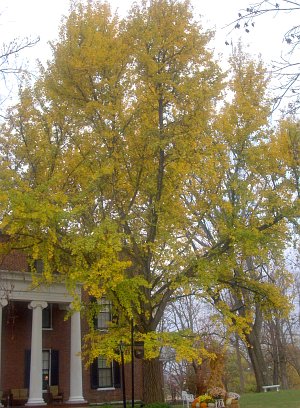 1 I can tell you where there's another one -- 525 N. Illinois Street, south side of the parking lot