Bad science reporting, and “disease of the day”
Here we go again:

According to a new study released by researchers at Rutgers University in New Jersey, a firm link has been found between very common moisturizers and the development of skin cancer.

Researchers were led by Dr. Allan Conney from Rutgers University, as they ran a test on mice to see what type of effect these moisturizers had on their bodies.

They tested four common types, Dermavan, Eucerin, Vanicream, and Dermabase. What they found was that all four were linked to the development of skin cancer tumors on the mice tested in the study.

A “firm link,” huh? Before panicing, let’s Google up a better explanation of how the study actually worked[1]:

For the study, Conney's team exposed hairless mice to an extended period of UV radiation, which induced non-melanoma skin cancer. After stopping UV treatment, they applied four different common brands of skin moisturizers to the animals’ skin five days a week for 17 weeks.

The researchers found that mice treated with skin moisturizers showed an increased rate of tumor formation. In addition, there were more tumors on the animals treated with moisturizers than on the mice that were only given UV radiation.

So it appears (to this layman) that, based on this study’s findings, we can conclude:
So far, that’s it. But it was instructive to look at how this (very preliminary) study has been covered in the press. For my findings, read on... 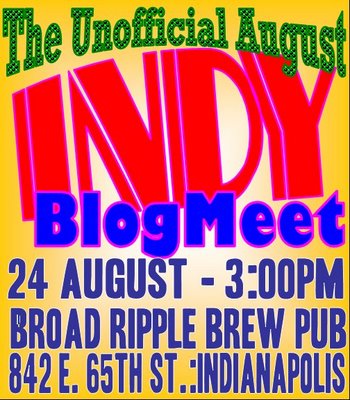 (Thanks again to Roberta X for the artwork.)

With a growing number of newspapers on the market at a time they most likely will fetch historically low prices, somebody is going to start buying some of them. But don’t count on the usual suspects.

Start thinking, instead, about such unconventional potential purchasers as the multibillion-dollar investment funds created by countries like Singapore or the sheikhdoms of the United Arab Emirates.

For considerably less than $1 billion of the up to $800 billion in its coffers, the Abu Dhabi Investment Council could buy the Newark Star-Ledger, Chicago Sun-Times and San Diego Union and turn them into U.S. editions of The National, the new English-language paper launched in the spring by the state-owned Abu Dhabi Media Co.

America’s newspapers, owned and controlled by the Arabs.  Lovely.

’Course they probably wouldn’t be any less believable than they are now...

“Save Internet Radio” campaign - doomed by naïveté
John Gorman directs some straight talk at the Save Net Radio campaign about the fight they’re in and the opponent they face:

Save Net Radio wants to play nice to the record company goon squadron. They can’t come to grips with the fact that this group will take pleasure in cutting out your heart and feeding it to you.

The RIAA considers fairness an antiquated notion at best and corrosive naiveté at worst.

There’s more, including a prediction of what the recording industry really has in mind.  Read the whole thing.

...in 2000, FEC investigators descended on Muleshoe, Texas, a small farming town of just under 5,000 inhabitants west of Lubbock. They were looking into a complaint filed against [two] local citizens who made the horrible mistake of putting up competing signs alternately supporting Al Gore or George Bush.
...
After subjecting Liles, Morton, and two other locals to an extensive investigation, the lawyers for the FEC found that they had violated federal law because their homemade sign did not have a disclaimer. In other words, it did not say who had paid for the sign and whether or not it was approved by the candidate, even though everyone in this very small town apparently knew who was responsible... The FEC’s general counsel recommended sending an admonishment letter — he could just as easily have recommended a civil penalty...

The author of the PJM piece, Hans von Spakovsky, is a former Federal Election Commission member. The outrages he describes took place during his tenure. With that in mind, he gets taken to task in the comments:

So you’ve become an agent of the FEC helping to propagate fear and uncertainty? Anyone who reads this will be a little less likely to express themselves in a spontaneous way.

But you could have written it differently. You could have provided the names of the FEC investigators and staff who promulgated this ruling. Better yet you may have provided their e-mail addresses or their home addresses so that we could send letters to their neighbors shaming them into ignominy for their egregious abuse of the First Amendment. Their parents and children should be shamed by their actions.

Those are the kinds of blogs we need on this story.

As I wrote almost a year ago:

“Naming and shaming” of officials may turn out to be one of the bloggers’ most important functions, given the way the regular media (even talk radio) customarily omit identifying the people behind the positions.

While the MSM may worry about staying on good terms with its “sources” (and von Spavosky may want to avoid embarrassing his former colleagues), bloggers shouldn’t owe these bozos anything. The little grey men who “just enforce the rules” should be outed– repeatedly. And if being confronted over what they do makes them uncomfortable, well it’s called “accountability.”


Related: McCain sets himself up the bomb

Despite 189 American lives lost in the Pan Am Flight 103 bombing, the U.S. settled all lawsuits against Libya for terrorist killings and restored diplomatic relations with the country today – with reparations to be paid to Libya.
...
Nicole Thompson, a State Department spokeswoman, told WND, “The settlement goes to both sides. The settlement is for outstanding claims on the part of Libya as well as the United States.” When asked whether the U.S. will make reparations payments to Libya, Thompson responded, “Yes.” - WorldNetDaily

Ah yes, the State Department. Looking out for everyone’s interests except America’s.


Via: The Corner via Shermlock

Ten days before Russian tanks and infantry invaded the democratic and pro-Western Republic of Georgia, the federal government’s Broadcasting Board of Governors (BBG) terminated all Voice of America (VoA) radio broadcasts to Russia, The Washington Examiner has learned. This means that throughout the still unfolding international crisis, a key communications tool that helped win the Cold War for the United States has been mute...

VoA employees are still working overtime to broadcast to Georgia, but they have also been informed that their mics will go dead Sept. 30. Dismantling such a proven means of communication with people trapped inside hostile regimes is so astonishingly stupid, it makes one wonder what planet members of the BBG board have been living on. - Washington Examiner

How about “indifferent to American interests?”  No, “Astonishingly stupid” it is!

Too bad there’s nobody home at the White House.

Off the air
After almost four years, “Callimachus” at Done With Mirrors feels the chill:

In the current workplace climate and the likely evolution of the political scene both inside and outside the newsroom, it would be extremely unwise for me to continue blogging, even anonymously...

[continuing, in the comments:] This newsroom, like most, is in a lifeboat ethics mode[1]. They’re looking for reasons to thin the herd...  ...The last time my online writing drew unwanted attention from my bosses, and a direct promise to terminate me if it continued, was in the run up to the last presidential election, when what I was writing was not the sort of things they liked to see written.

Regrettable, but perhaps inevitable, given the sort of “management” that infests most papers today.  (I can certainly understand his lack of enthusiasm for being a martyr for free speech, especially when there are bills to pay, but my unasked-for advice would be, “Polish your resume. And Get. Out. Now.”[2]  There’s little to gain (except, possibly, personal satisfaction) from being the Last Man Standing; your bosses certainly won’t reward you.)

Meanwhile, this reader will miss his thoughtful, literate, wide-ranging posts.  For those unacquainted with his blog, here are few recent recommended readings:
Live Not By Lies
History Matters
Little Engines
Poetry Matters
Saint-Lô

-----
[1] Meaning, apparently, a dystopian every-man-for-himself atmosphere.   Certainly not Heinlein’s (“A lifeboat can have only one captain at a time.” - Spider Robinson) ethic.

[2] Yet another demonstration of the wisdom of establishing a “go to hell” fund, and contributing to it frequently.

In a 1977 interview at the St. Petersburg Times, Nelson [Poynter] said: “I always kept about $1,000 in the savings account, which I called my ‘go to hell money.’  I felt I was a better staffer on any newspaper if I didn’t have to work for that newspaper.  I think the most unbearable [job] would be to work for a newspaper that you hated, that you had no respect for.”

(Which is, of course, true about working for any business.)

1 Glad you could join us.  It's just not the Indy blog meet without you!

Or private jet either.  Actually, members of Congress should be required to fly coach class, and be subject to the TSA’s “special” inspection every trip.