In re: Reader’s Digest

Several folks have noted the Chapter 11 bankruptcy of the Reader’s Digest Association, parent of the magazine Reader’s Digest.  Common in many comments: “I used to read the Digest, but don’t anymore.”  Usually followed by the reply, “you haven’t missed much”.

Count me as another of those for whom the Digest’s place in my life has fallen from “must-read” to “who-cares?”  For me it began in the late1980s, when the magazine began to narrow its focus, perhaps in an effort to avoid surprises for what it saw as its core audience (i.e., “old people”).[1]  The bill of articles became less interesting, and more predictable:  Too much “disease of the month,” and “I am Joe’s Coccyx.”  Too much “Drama in Real Life™,” instead of “real book” condensations.  From a magazine that was hard to throw away[2] it became “hard to pick up.”  And a publication that had once promised “articles of lasting interest” began to consist, mostly, of articles of no interest whatever.

Inevitably Mr. Lileks, the web’s master of Things Archival, has posted a scan of the front-cover table of contents from the Digest’s January 1941 issue.  He finds that issue’s topics “insufficiently diverse by modern standards,” but I don’t know: I see stories about current events, the entertainment industry, technology, life and relationships, foreign affairs, domestic politics, some short fiction, even a couple of Dramas In Real Life (in the days before the “TM,” yet!).  What’s absent is the kind of fundamentally unserious crud that clutters current issues:

Ah, the People®-ization of the magazine industry!

But I don’t believe that’s the explanation, or at least, not the whole one.[3]

Part of the change has to be because mining the seam of other magazines’ content has become more difficult.  Look at the magazine names on that1941 contents page:  American Mercury. Collier’s.  Liberty.  Cosmopolitan.[4]  Saturday Review of Literature.  Even Life.[5]  All gone.  In fact, it’s hard to name a general-interest (i.e., non-political, not intended for a specialist audience) magazine that publishes long-form articles or essays any more.  The demise of such publications means that anyone who expects to do a Digest today must work harder at seeking out suitable material.

But instead of bowing to the necessity of casting their nets farther and deeper, the Digest’s operators lost faith in what they were doing, and chose to morph the magazine into one containing

...the same subjects [you’d find] in any modern newspaper or glossy women’s rag, written in the same perky tone, aimed right at the 30-something mom who sorta thinks Kate is a bitch but you know, that hairstyle does work for her.  People for whom free-floating anxiety over inconsequential matters is a hobby, a habit, a proof of virtue.

(Lileks, again.) Apparently no one thought to ask why anyone would bother to collect a magazine that ran the same ten articles (or indistinguishable versions of them) every month.  Or why anyone would want to purchase such a publication in the first place.

Could the Digest again be something that I would buy?  I believe it could, but “restored” is the key word:  For me, any new Digest would have to be more like the old Digest, in terms of both significance of content and editorial philosophy.  That could happen, provided the ownership and an editorial staff get behind the concept, and truly believe in the product. (A big “provided,” given the present incumbents!)  Certainly suitable articles can still to be found.[6]

And then, of course, there’s always the web: A likely source for material, but also a marketing tool.  After all, the Digest was a successful aggregator and portal long before either word had anything to do with computers.

Posit a “Webbie’s Digest:” A print publication that not only mines other print publication, but also finds, selects, edits, and gives permanent publication to the internet’s “articles of lasting interest”?  Marketed not just by mailing out sweepstakes coupons, but through the very websites that are sources of its content.  Once a month- 12 times a year.

Would anyone buy such a publication?  (Would you?)  Could it attract enough advertising to support itself?


Elsewhere:
National Review:  InDigestible
MSN Money:  Reader’s Digest to file for bankruptcy
Daily Pundit:  Slip Sliding Away
-----
[1]  Although the Digest had been predictable long enough for Mad’s Joe Orlando to do a dead-on parody (unfortunately, not to be found on line) in- wait for it!- 1957.  (Specimen article title: “How To Get a Lot Out of A Little”)

[2]  Back in the old days, it seemed, the second-most-collected magazine in most homes- after National Geographic- was the Reader’s Digest.

[5]  In its familiar all-pictures incarnation, not the humor mag of 20 years earlier.

[6]  For example, the current Trains magazine (an enthusiast/industry publication) contains a comprehensive article on states’ proposals for using stimulus dollars for high-speed rail development.  And September’s Opera News has a comprehensive roundup of the trials and tribulations of America’s regional opera companies in our time of financial crisis.  Either article should interest the general reader. 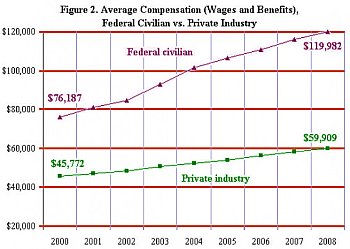 Members of Congress who have large numbers of federal workers in their districts relentlessly push for expanding federal worker compensation.  Also, the Bush administration had little interest in fiscal restraint, and it usually got rolled by the federal unions.  The result has been an increasingly overpaid elite of government workers, who are insulated from the economic reality of recessions and from the tough competitive climate of the private sector.

Gee, I remember when government employees used to get paid less.  I guess this is because of those lousy benefits government workers get, that and the non-existent job security... oh wait!

Via:  Warren at Coyote Blog, where a bunch of commenters are offering excuses.  (I’m not buying ’em.)

Immigration explanation
All you need to know, from R.S. McCain:

“...there has been no significant change to U.S. immigration law in the past 44 years that was not approved by Ted Kennedy.”

As part of a campaign called Resale Roundup, the federal government is cracking down on the secondhand sales of dangerous and defective products.

The initiative, which targets toys and other products for children, enforces a new provision that makes it a crime to resell anything that’s been recalled by its manufacturer.
...
The crackdown affects sellers ranging from major thrift-store operators such as Goodwill and the Salvation Army to everyday Americans cleaning out their attics for yard sales, church bazaars or — increasingly — digital hawking on eBay, Craigslist and other Web sites.
...
Staffers for the federal agency are fanning out across the country to conduct training seminars on the regulations at dozens of thrift shops.
...
Scott Wolfson, a spokesman for the agency, said it wouldn’t be dispatching bureaucratic storm troopers into private homes to see whether people were selling recalled products from their garages, yards or churches.

“We’re not looking to come across as being heavy-handed,” he said.

“We want to make sure that everybody knows what the rules of engagement are to help spur greater compliance, so that enforcement becomes less of an issue.  But we’re still going to enforce.”
...
The commission’s Internet surveillance unit is monitoring Craigslist and other “top auction and reselling sites” for recalled goods...
...
The Resale Roundup is being enforced under the Consumer Product Safety Improvement Act, which Congress passed

Quotes from McClatchy Newspapers, via: Hot Air  (HT to “ICBM” for the title!)

On Tuesday, MSNBC’s Contessa Brewer fretted over health care reform protesters legally carrying guns: “A man at a pro-health care reform rally...wore a semiautomatic assault rifle on his shoulder and a pistol on his hip....there are questions about whether this has racial overtones....white people showing up with guns.” ...

Not only did Brewer, Ratigan, and Toure fail to point out the fact that the gun-toting protester that sparked the discussion was black, but the video footage shown of that protester was... edited [so] that it was impossible to see that he was black.

Tam:  Spin & Sabotage
[In the comments]

Clean cut and clean-shaven?  Check.
Pressed and dressed and wearing a tie?  Check.
Skin of a rich, dark hue?  Check.
The guy was a PR genius.  He laid out the sucker bait for the meejia and they eagerly snapped it up.

1 Tam said it best: the guy was a PR genius.

Next we need a gay couple to show up with AR's on their shoulders.

And speaking of questions...
John Hinderaker has a dozen for those pushing Cap-and-Tax.

Prior to 1902, Congress had never reached a 70% reelection rate.

Chart and discussion at Doug Ross’.

Additionally, I would note that Congress’ seniority-bound organization provides an additional incentive for voters to re-elect incumbents, as multi-term tenure is prerequisite for political clout.

Which is an important factor keeping people like Richard Lugar in office long past their expiration dates.

Why do you suppose he did that?
Andrew Breitbart on George W. Bush:

His birth into a wealthy and politically connected family is where a lot of the animus starts.  His rejection of his Connecticut roots and adoption of a rugged Texan persona naturally riled his birth-constituency...

Officials from both political parties reached across the aisle in an effort to find compromises on proposals they left behind when they returned to their districts for an August recess.

Obama had sought the government to run a health insurance organization to help cover the nation's almost 50 million uninsured, but he never made it a deal breaker...

Health and Human Services Secretary Kathleen Sebelius said that government alternative to private health insurance is “not the essential element” of the administration's health care overhaul.

Under a proposal by Sen. Kent Conrad, D-N.D., consumer-owned nonprofit cooperatives would sell insurance in competition with private industry, not unlike the way electric and agriculture co-ops operate, especially in rural states such as his own.

I don’t have a philosophical objection to co-ops (provided they don’t get special treatment), but let’s not confuse “consumer ownership” with “accountability.”  Hint: Seniors, think AARP.

With $3 billion to $4 billion in initial support from the government...

And if co-ops are such a good idea, why do they need billion$ in subsidies?  More cash for Friends of Nancy & Barak?

...the co-ops would operate under a national structure with state affiliates, but independent of the government...

...and everybody else, except for their administrators.  Think AARP.

[Sebelius:] “You don’t turn over the whole new marketplace to private insurance companies and trust them to do the right thing.”

What “new marketplace”?  It isn’t as if we haven’t had private health insurance all along (although it’s unsurprising that a government apparatchik would be unaware of it).  And why not trust the private companies?  It isn’t as if the government is that much more trustworthy...

Of course she did.
Related:  If the government plan screws up your care, who’s accountable?  (Can you say “sovereign immunity”?)  “alexthechick” has some nuts-n-bolts questions, here and here.