All you need to know about public education 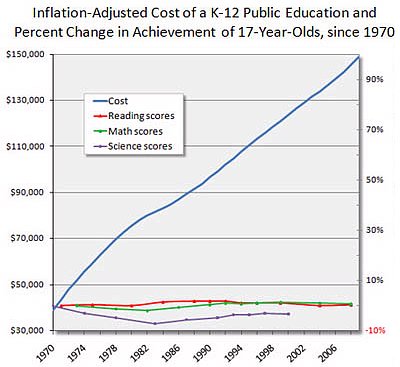 But if you want to know more, there’s more here.

Kaa-runch! (x3)
The wind doth blow  Dept
Yes, these are three self-supporting towers.  On the ground. 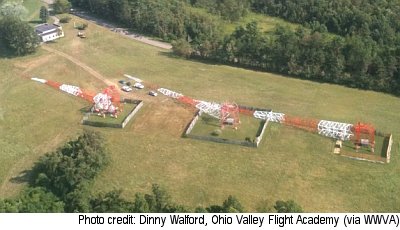 This is WWVA, Wheeling– after Wednesday’s storms.  Ouch.

1 One of the great blowtorches of the 20th century.  (The FCC doesn't care about that sort of thing anymore.)   The other big 1170 in the States is in Tulsa.

2 I fear that someday we may get a surprise, and discover that high-power Ancient Modulation still has a place in national security.  Question is, between the clueless FCC and the equally clueless consolidators, will it still be there?

Sad recent experience when driving past Lexington, Kentucky one evening:  Tuned the car radio to 770, and heard not WABC, but some daytimer religious dropin.

If I ruled the world, we’d get rid of NRSC-2 (so AM could start sounding good again) and bump our blowtorches to 500KW.

3 It would help if the present-day receivers weren't such total crap: with few exceptions, they seem to have been going downhill for the last thirty years or so.

4 I have seen towers drop like that when not enough was spent on maintenance -- not just painting, but full inspection, plumb  & straightness checked, bolt-tightening and so on., which is just barely worth it for a big AM.  (Making enough profit to pay for upkeep is a real issue).  But all three to fall like that points to a "perfect storm" combination of some inherent weakness and enough push to do the job.

These events are a PITA for the station.  Likeliest replacement will be three inexpensive (hah!) guyed towers.

5 I note without further comment that WWVA is owned by the same folks who lost one of their self-supports here in Indy (on Fall Creek Road) a few years back.

6 I know most of the "benign(?) neglect" occurred under Taft rather than the billboard company -- by the time they got it, it was probably already too late and they were about five Chief Engineers removed from anyone who might've remembered that.  Caveat, by gosh, emptor; there are specialist firms who will inspect, recommend and repair, but they don't come to your door like the Fuller Brush man and they're not the same breed of cat as the riggers who paint them and change the lights.

There's a lot of speculation those are Blaw-Knox towers and it's possible; I'm startin' to suspect Ideco.  Pre-WW II Idecos are rugged, pretty much oil derricks, and will last forever if the insulators hold up.  Postwar, there's a little evidence that someone's slide rule was slipping; most of their surviving tall, guyed towers have been heavily re-engineered.

Clipfile - August 5, 2010 “...We have for too long conflated the legal structure that has grown layer by layer like a coral reef, with the underlying sources of legitimacy…the Constitution, the will of the people as expressed by their representatives or through popular vote. In short, the consent of the governed.” - “DrewM.”

City Hall is a landmark in downtown New York – a dignified classical building with wide steps leading to the traditional fluted colonnade fronting, standing on a large open parcel of lawn.  The last time I walked past it, several years ago, the steps were peopled by local politicians and other functionaries, favor-seekers, reporters, and the usual assortment of Runyonesque characters that typically surround the City’s bureaucracy.  Anyone could wander up as the limousines, taxis and cars pulled up, observe comings and goings of mayors, councilmen and lobbyists, and mingle for a moment or two with the municipal machinery and absorb no small dose of all the varied fauna that feed and feed off the public purse.

No more.  Now the huge iron gates are closed and locked. Barricades of formidable size and sturdiness, emblazoned with the word STOP in two-foot-high letters, declare that no traffic shall pass.  The steps are deserted.  The once-busy lawns are lifeless, empty. A cordon of gleaming blue and white police cars flanks its borders.  It’s a ghost town.

One might reasonably conclude that whoever might be inside that building now, they are scared to death.
- “nemo paradise,” Modern Times (and RTWT)

Around here, the “search all the citizens” program got started a few years back when the county’s judges became worried that the armed deputies routinely present in their courtrooms were insufficient protection from the less decorous members of the hoi polloi.[1]  When the courts outgrew the court wing, they mandated it for the entire City-County Building. Now you must take off your belt and shoes, and surrender your nail clippers, before you can register to vote, attend a zoning hearing, or pay your property tax.

Of course the mayor, councilmen, and bureaucrats never uttered one word of objection.


------
[1]  A former deputy prosecutor friend tells of an old-time (but not that long ago) judge who handled his protection worries– without bothering the innocent– by packing a pistol while on the bench.

“Standing in the schoolhouse door”
Somebody could do an editorial cartoon  Dept
Mark Tapscott:

When I was a teenager, the image of George Wallace standing in the school house door at the University of Alabama was burned into my mind.

Or maybe  standing in the door of the charter schools, keeping the kids out.  With the the NAACP, the National Urban League, the Rainbow PUSH Coalition, the NAACP Legal Defense and Educational Fund, the National Council for Educating Black Children, the National Action Network, the Lawyers Committee for Civil Rights Under Law, and the Schott Foundation for Public Education standing right there with them.

...To the extent that the teachers unions are blocking an agenda designed to help the poorest students in the worst-performing schools, and that civil rights groups have aligned themselves with the unions' concerns, these groups are making a terrible mistake.

“We want the best for our kids, even if it doesn’t follow the liberal status quo.” - Al Sharpton(!)

L.A. Times Writer: Let’s Have Another National Conversation on Race
No, let’s not.  Having grown up in the South I’ve been subjected to all too many “conversations on race”.  Of course it’s never a conversation at all - it’s merely a public opportunity for whites to admit their racial wrongdoings and receive the conditional forgiveness of any black people present while the organizers preen.
If I never go through another one until the day I’m finally killed by the homeless, it'll be too soon. - “Matenloch”

Better read the fine print first...
Breitbart thinks he got a correction:

The Political Times column last Sunday, about a generational divide over racial attitudes, erroneously linked one example of a racially charged statement to the Tea Party movement. While Tea Party supporters have been connected to a number of such statements, there is no evidence that epithets reportedly directed in March at Representative John Lewis, Democrat of Georgia, outside the Capitol, came from Tea Party members. - The New York Times

Andrew celebrates, but over at PJM, commenter Mark Buehner says you’d better parse it like Pravda in the old days:

This wasn’t a correction- it was a further calumny. A REAL retraction would explain that there is no evidence, despite mounds of video and audio evidence, that any racial slur was uttered by anyone that day.  This pile of garbage was a non-apology apology that managed to make further unsupportable claims.

So nothing to see here, folks.  Might as well move along. 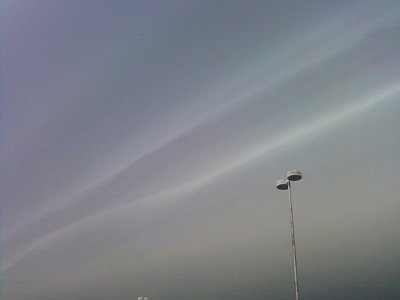 Getting gloomy in the north: 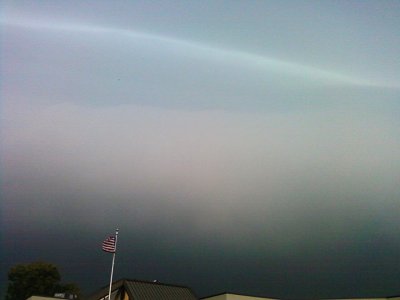 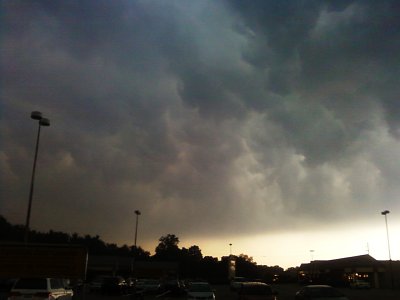 After all that excitement, it barely rained here (although points west and south got a bit).  Later on, things cleared off; right now it’s sunny and high 90s.