Clipfile - November 13, 2013
‘‘If you listen to artists, writers, academics and journalists, you would think that thousands of them operate in a radical underground.  They say the right things.  They ‘speak truth to power’, ‘transgress boundaries’, and all the rest of it.  But you will have noticed that they are careful only to challenge religions that won’t hurt them (Christianity) and governments that won’t arrest them (democracies).’’ - Nick Cohen

(Via:  Steyn via Blair via Mætenloch)

After a chilly night...
First snow of the season... 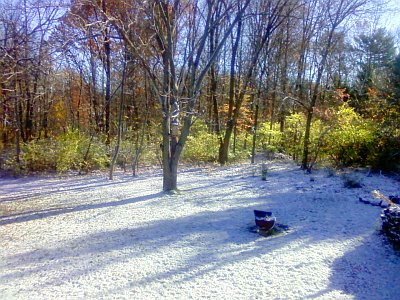 That’s assuming they ‘‘blindly bought’’ them...

I find it amazing how far much of the US federal bureaucracy has fallen from the standard of a professional, impersonal, merit-based Weberian organization since the first efforts to do this were made under the 1883 Pendleton Act.  For example, in recent years fully half of all new entrants into the federal civil service have been veterans, and of these, a large number are disabled veterans.  There is nothing wrong with hiring disabled veterans, but this Congressionally-mandated veterans preference was not designed with the aim of producing the highest possible quality government.  It is akin to the mandates imposed on federal procurement for small-, women-owned, or minority business contracting...

(We interrupt this quotation to remove two sentences.  Reason why, below.

Recruitment and promotion tend to value experience over capacity, and therefore reinforce a status-quo bias among federal employees.  What we end up with is a screwed-up set of incentives for federal workers that does not reward innovation, risk-taking, or high levels of qualification.


Problem stated.  And now, his solution, in those two sentences:

What the contemporary civil service fails to do is to attract smart, highly qualified young people out of elite universities in the manner of the classic French, German, or British services.  In fact, the government is very good at putting a large number of obstacles in front of any ambitious young person who might want to sign up, like voluminous disclosure rules in the current employment regulations.

So:  One of our public intellectuals wants to fix failure in government by replacing the bureaucracy’s protected-class incompetents with ‘‘elite university’’ mandarins.  (You know, like in France!)


Via: Glenn Reynolds, who notes:

...The fact [is] that the civil service has been colonized by a single political party, and that career officials who are supposed to be nonpartisan have been acting as partisan political operatives...  I don’t think that Fukuyama’s proposed reforms would do anything about this problem.

I have never been a fan of Fukuyama.  Believing that the fall of the Soviet Union signalled the "end of history" lost him all credibility with me, and that was back in the early 1990's before we knew how nasty things were going to get with Saddam and a resurgent Russia under Vlad the Terrible.

Looking back, his track record of prediction is pretty awful.  The AHA ought to make him turn in his membership card and secret decoder ring.  On the other hand, he should have heeded the advice my undergraduate advisor gave me way back in 1984:  "Historians don't dabble in 'what if'.  They study 'what was'."  And Fukuyama blew it on both counts.