ObamaCare: If you like your volunteer fire department...
Where there’s Smoke  Dept

The International Association of Fire Chiefs has asked the Internal Revenue Service... to clarify if current IRS treatment of volunteer firefighters as employees means their hose companies or towns must offer health insurance coverage or pay a penalty if they don’t.
...
‘‘It could be a huge deal,’’ said U.S. Rep. Lou Barletta [R-PA]..., who is seeking clarification from the IRS.  ‘‘In Pennsylvania, 97 percent of fire departments are fully or mostly volunteer firefighters.  It’s the fourth highest amount in the country.’’
...
The health care reform law, known officially as the Patient Protection and Affordable Care Act..., requires employers with 50 or more full-time employees to offer health insurance...[or] pay fines.

The requirement is complicated by differing interpretations about the status of volunteer firefighters within the federal government.  The Department of Labor... classifies most volunteers as non-employees, but the IRS considers all volunteer firefighters and emergency medical personnel to be employees of their departments.
...
...The problem could be even more complicated if the IRS counts volunteer hose companies as one department in towns with more than one hose company, or as part of a town’s workforce.  Definitions like that could bump the total numbers beyond the 50-employee threshold and require offering coverage that towns or hose companies cannot afford...

And those ‘‘unintended consequences’’ just keep on coming! 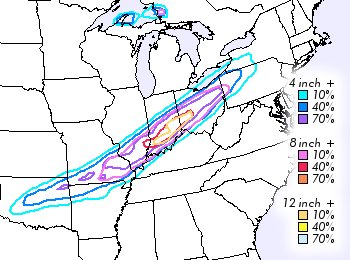 LATER:  Came the dawn: Not much additional accumulation here, but the forecasters warn of a possible 5" more this afternoon.

From the archives:
Old Grouch, December 4, 2010:  December checks in

...and Don’t You Forget It!
The Party of Envy  Dept

‘‘[Liberals'] money is the reward for a lifetime of hard work.  Your money was gotten by ripping off poor people, so it needs to be redistributed.’’ - ‘‘srlucado,’’ commenting at Instapundit

The article goes on to list every insurance company that offers plans in the Washington exchange as well as the hospitals that are in-network for those companies.  Pivoting off of that list, Steve Roth points out that two of Washington’s biggest insurers—Primera and Lifewise— don’t have any of the state’s four top specialty hospitals in their networks.  If you want the best cancer, trauma, ER, or pediatric care, and your plan is with one of the two biggest carriers in your state, you’re out of luck.

And here I was told that ObamaCare was supposed to get rid of all the ‘‘junk plans’’...!

Of couse the номенклату́ра- starting with the Senate Majority Leader’s buddies- get exempted from dealing with this shit.