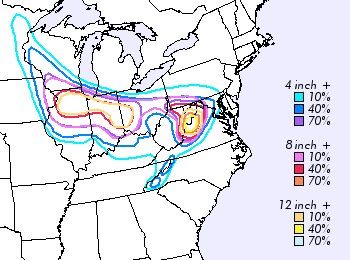 A WINTER STORM WARNING IS IN EFFECT FROM 3 PM THIS AFTERNOON TO 7 AM WEDNESDAY.

HAZARDS:  SNOW AND BLOWING SNOW.  TOTAL SNOW ACCUMULATIONS OF 4 TO 8 INCHES ARE POSSIBLE BY EARLY WEDNESDAY.  ROADS WILL BECOME VERY SLICK AND HAZARDOUS LATE TODAY AND TONIGHT.  WIND GUSTS UP TO 30 MPH.

TIMING:  LATE THIS AFTERNOON THROUGH TONIGHT.

DISCUSSION:  LOW PRESSURE OVER NORTHERN ARKANSAS WILL STRENGTHEN AS IT MOVES NORTHEAST INTO THE OHIO VALLEY AND MERGES WITH A LOW PRESSURE SYSTEM ALOFT MOVING SOUTHEAST FROM THE NORTHERN PLAINS.
RAIN POSSIBLY MIXED WITH SNOW WILL OCCUR TODAY CHANGING TO ALL
SNOW BY LATE AFTERNOON.  HEAVY SNOW ACCUMULATIONS ARE POSSIBLE TONIGHT.  WINDS OF 20 TO 30 MPH LATE TONIGHT WILL CAUSE BLOWING AND DRIFTING SNOW.

Roberta has a report and photos.  Squirrel!
...while at VFTP, Tam joins that shovelin’ throng.

Clipfile - March 4, 2013
‘‘Much of today’s left have abandoned the serious study of history, and have largely turned their backs on the future as well.  All that is left for them is to play in the ruins — and to create more of them.’’ - Ed Driscoll

Playing the ‘‘supervision’’ game
I’ve Got A Little List  Dept

Gem of an idea, found in the discussion of Jazz Shaw’s Hot Air post on the Voting Rights Act litigation:

At one time there was a need for the Voting Rights Act, but it’s an antiquated law now, rendered irrelevant by the advance of time, demographics, attitudes, and communications.

I tell you what we do need... A ‘‘Second Amendment Rights Act.’’  And I can think of a bunch of states that ought to come under a greater than standard scrutiny when passing laws that relate to this right.

I agree with Dusty.

How about a ‘‘Freedom of Speech Act?’’  That one could apply federal monitoring to any state entity (I’m looking at YOU, universities, but also the Indiana Court of Appeals (More on the latter here.)) that attempt or have attempted to limit First Amendment rights on spurious grounds such as ‘‘hatred’’ or ‘‘unfairness.’’[1 UPDATE]

Hey, this could get to be fun!

When you can’t do your job, then...
Creeping Bloombergism  Dept

Pair o’headlines from the UK:


The Daily Mail:
Study finds nearly 40% of health service workers would NOT recommend own workplace to friends or family
The Register:

Seems to me that ‘‘broad coalition of UK health organizations’’ who uttered the alcohol proposal could better spend their time straightening out the NHS.  But then calling on the government to limit other people’s liberty has always given the ruling class more jollies than getting their own houses in order.

Instapundit: ‘‘Maybe the ‘public health’ people should focus more on, you know, public health, instead of guns, Twinkies, and Big Gulps.’’