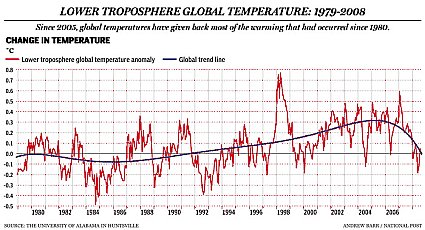 I know enough about statistics to know that I don’t know much about them.  But... assuming that the data are accurately ploted, and assuming the trend line has been accurately calculated, my “eyeball” inspection says the trend line starts to curve downward in about 2003, first at an increasing rate, then stablilzing about mid-2007.

Now sensible people would say that you’ll see trends like this when you graph any natural phenomena that tend toward a normal value, and that we should shortly expect the trend to flip positive again.  But the slope of the curve is pretty severely negative, so even with the trend turning positive we could expect to see negative figures on the chart for several years to come.

Gunter looks at the graph and says, “all of the rise in global temperatures since 1979 has disappeared.”  Well, the data charted here doesn’t support that.[1]  It will take several years’ worth of negative entries before that happens.

Still, it’s amusing to take that trend curve, and do a little extrapolation:

Which will, of course, make no difference whatever to some people.