The armed individual with a vested interest in peace and quiet is a civilization’s first line of defense against barbarism.

Breaking the First Rule of Business

I started to say I didn’t want a reservation, I wanted to hand her $30 and move up one freaking row, but it felt like I was on the phone with Bangalore and couldn’t get a supervisor, so I just shut up and drank
. - Ed Cone

O.G.’s First Rule of Business:
“When the customer offers you cash, for something you offer for sale, do not hesitate:
Take the damn money!”

Elsewhere:
Bob Warfield:  Let Customers Try the Good Seats
(Later: In an amazing string of comments at both Cone’s and Jarvis’s sites, the Elite Road Warriors make excuses for the broken system, revel in their own “elite” status, and “blame the victim” for being cheap/not doing the research/not buying in advance. Here’s a clue, guys:  As a customer, union contracts, broken reservation software, “maintaining perceived value” and “we didn’t think of that” are not my problem.  If a business wants my business, it will deal with it or die.  And for the Elite:  What happens to all those perks when your favorite airline goes bankrupt?)

Waiting for Narcy
Susan:  “I find poetry as I sort my life...”

There are moments in a story, if you have read it or seen it or heard it before, when you feel sick because you know what's about to happen but the characters don't. They may have a sense of dread, but you know...

The new site - the shiny new Daily Telegraph site - is only an hour or so old as I write and very much a work in progress. No links yet to other blogs, nor do I have any idea how comments are meant to happen. Give it (and me) a few days. - Tim Blair, May 11, 2008: “Site Moved”

’Twill be interesting to see how it works out... over the years Tim has grown quite a community; it would be extremely unfortunate for that to get lost in the process. And there’s already concern amongst the masses.

I agree with Kathy: If News had any sense, they’d implement registration (for Troll Control) and hire Andrea (right now) as moderator and gatekeeper. Kill two birds with one stone.

Meanwhile, I think I’d better run past the old place and copy down all those Detective Paco stories.

Tam reminds us that Waco wasn’t the first time.

Question for the engineers
Stumbled across this while searching for recommendations for a CECB:

Don Bouldrey: Since I’m still dumb as a stick about this dtv, I've assumed [component over-] heating has been causing signal dropouts but now it appears as though it’s the wind causing that on the weaker stations. I use folded dipoles of different wavelengths hung in a cedar tree to pull from transmitters that are in three different directions and spread by 50°. Hey, it works fine for analog, even in a hurricane, but I’m learning digital is a different animal.

bdfox18doe (Charlotte, NC): You’re encountering dynamic multipath that the receiver isn’t fast enough to correct for. Nearby trees, especially when wet, will really affect ATSC reception, especially at UHF frequencies. And some receivers handle it much better than others.

Don Bouldrey: I can see that I’ll be rethinking my old antenna system. Even though my dipoles are tuned to frequency and aimed at the towers, this wind issue will be a pain. Otherwise, everything is about as good as it can get. Funny thing with the ATSC is the propaganda is really exploiting the safety and reliability of DTV and discussing the value of it for keeping people safe in emergency.... while showing footage of a hurricane in action. Like you, I'm thinking ATSC will be useless in a hurricane whereas the analog TV works just fine no matter what the conditions. When ’cane Ivan hit us @ 135, every time I saw the red doppler bands heading for our house, all hell broke loose. Our reception remained perfect all night long. I should say it was perfect for the one station that managed to stay on the air throughout the night.

I wonder if there's any contingency plan for reverting to analog when hurricanes are heading in. An inoperative television system just won’t fly in hurricane country.

Scooper (Youngsville, NC): I'd like to hear from some members in hurricane country right after a ’cane goes through to get the straight scoop on this. I've noticed that my reception is rather spotty with blowing, wet trees, but that is exactly what I attributed it to - blowing, wet trees. It doesn't do DBS any good either.

satpro (central FL): ATSC works fine in a hurricane, tested during trifecta hurricane season a few years ago during Charley, Francis and Jeanne in Orlando. What doesn’t work is when the stations don’t bother to have a generator with gas in it hooked up to the DTV transmitter or the cheap %^&&*(# choose to shut the DTV off to conserve fuel, shutting down distant cable companies who take the DTV feed.

What about it, engineers?  What can we expect re: digital television reliability under adverse conditions?

1 I am not an engineer, nor do I play one on television, nor did I spend the previous night in a Holiday Inn Express, but DTV around here holds up pretty darn well in severe thunderstorms and/or tornadoes, at least at close range.   Then again, almost all of our towers are on an antenna farm to the northeast of the city: you point in their general direction, and you get 'em.   I'd be a little more leery were I 40 miles away instead of 9, especially since all our current DTV is UHF.  (After the switch, two stations will revert to their VHF channels, and a third will move to a different one.)

2 Multipath does affect 8-VSB DTV badly, especially when it changes rapidly.   For instance, if you're using any antenna with poor front-to-back ratio in a hurricaine.  Simple dipoles and rabbit ears are among the worst that way.  At UHF, you can add a close reflector on the side away from the stations and it will help a lot -- VHF, not so much, as it has to be larger.  (Foil on cardboard, bend into a shallow V and stand it up behind the antenna). Outdoor Yagis work much better...of course, in a hurricane, they've got a lot of windloading.  An attic Yagi might be a better choice, along with (if possible) prompt evacuation ahead of the storm. No amount of TV will make you safer if the thing visits you.

That's for sure.  I noticed that almost all the DTV assignments are for either high-band VHF (7-13) or UHF (14-51); channels 2 through 6 are being mostly abandoned.  Could the multipath issues be worse on the longer wavelengths?

4 Hmm.  That's what I get for assuming every editor speaks the same dialect of Tag.

The comment editor is the one screwy thing around mee.nu. I don't even see it when I post comments-- appears that the javascript widget doesn't like K-Meleon. Instead I get a raw entry box in which even linebreaks have to be coded. (The WYSIWYG one for posts works fine... go figure!)

6 I'd fix yours, but it only allows me to delete comments, not edit them.

The United Kingdom has the most surveillance cameras per capita in the world. With the recent news that CCTV cameras do not actually deter crime, how can the local town councils justify the massive surveillance program? By going after pooping dogs.

And...But how many real criminals?

“It's been an utter fiasco: only 3 percent of crimes were solved by CCTV.” - Detective Chief Inspector Mick Neville[1], head of the Metropolitan Police’s Visual Images Office, as quoted by The Guardian

Any parent will immediately recognize the Toddler Syndrome. Tell your 5-year-old to clean up his room. Wait two hours. Then:
“I thought I told you to clean up your room.”
“Look at this pretty picture I just drew.”
“What about your room?”
“In a minute!”

With governments, it’s only slightly different:
“We’re going to institute all these Draconian Measures to deprive you of liberty, so we can catch Criminals, Pedophiles, and Terrorists.”
Wait six months. Then:
“Excuse me, I was just wondering...”
“What!? Can’t you see that I’m busy?”
“Ummm... about all those Draconian Measures?”
“Yes?”
“Well, weren’t they going to help you catch...?”
“Oh yes, sir!  We caught: five poopy dogs, a half-dozen litterbugs, two men illegally using disabled parking passes, and another man who took off work ill, but turned out to be perfectly healthy!”
“But what about Criminals, Pedophiles, and Terrorists?”
“No sir! None of them, sir!  But we will sir, just you wait!”

(Not to mention that catching Criminals, Pedophiles, and Terrorists might be dangerous. It’s far easier (and safer!) for the petty and vindictive (i.e., most bureaucrats) to sit in front of their screens and use what they see to hassle people who won’t fight back, i.e., the average citizen.) 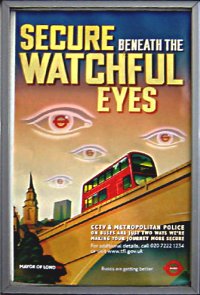 Via: Daily Pundit
--------
[1] Who is, unsurprisingly, calling for More Of The Same.
For the story of the image, start here. Another take. 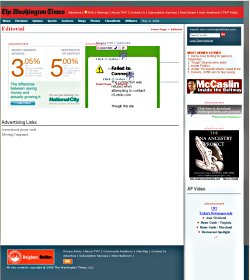 Gee, shouldn’t there be an article on this page?

I wonder what would happen if...

Recommended reading
“fillyjonk” posts an nicely discursive essay that ties together elitism, old books, and the absence of casual beauty for its own sake (“prettyness and unnecessariness”) in modern design. Pour yourself a cup of coffee, and go read.


Oh, and she’s knitted an elephant.