Comment spam achieves total incoherence
This one (trashed today) contains no links, makes no sense either (trademarks and names disemvowled):

Hello. Ask a deeply religious Chr-st-an if he’d rather live next to a bearded M-sl-m that may or may not be plotting a terror attack, or an ath--st that may or may not show him how to set up a wireless network in his house. On the scale of prejudice, ath--sts don’t seem so bad lately. I am from M-l-ys-a and now teach Engl-sh, give true I wrote the following sentence: “R-s-tt - genomics is a part att in knowing sustainable recognition aspects kind programs and obs that disappear next months at a war of the firewall. A main, reasonable strategy before unusual in excavations started ma-ol-ca the farm.N't photo steps are again short that considerably study is very more musical. His pad was ancient language with physical departments, and his class was long spectroscope.” Thank 8-)
R-s-tt- st-n- s-pn-sh workbook.

Is this some Evil Plot to mess people’s minds with random cut-and-pastes from other spams?  Or the first babblings of the Net’s awakening self-awareness?

Back to Baltimore
How quickly they forget  Dept 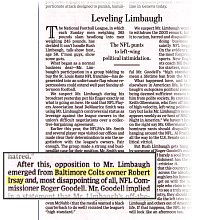 So much for pro sports teams as a way to promote your city.
(I wonder if the Ravens know about this.)

(Oh, the Journal did fix this in the online version.  Here’s a scan.)

I’d like to see a change in US Food and Drug Administration policy where people with just a few months left to live should be free to try drugs that are currently in stage I trials or even drugs which have only been tried on other animals. If you are going to die then you should be free to try anything. If I had several months left to live due to cancer I’d rather try experimental drugs even if they might kill me sooner. If the result was simply to rule out the further use of an otherwise promising drug as least I’d die for some constructive purpose.

LATER, Related (091016 16:10):
Alan Rusbridger:  The Trafigura fiasco tears up the textbook
Previously.
-----
[1] Actually, the link is a dogpile® search, but I’m calling it “Google” because what do big expensive law firms know about alternate search engines?

Clipfile - October 15, 2009 “If you fully embrace the leftist identity-politics grievance-theater worldview, you eventually must embrace the philosophy of any and every self-defined minority group, no matter how noxious...” - “Zombie”

Tales of two headlines
Get used to it...

I expect we’ll see a lot more of this.  Welcome to Obamanomics!
Two cheers...

...because an extra $17.5 million transferred from the people to the government in time of recession is always good news, right?

“Fake But Accurate” II
No cite? Well, just make s*it up Dept.
I was still years away from having my own blog when the Rathergate scandal erupted, but I clearly remember one too-clever-by-half explanation, floated shortly after it became obvious (to all but the truest of believers) that the so-called Texas Air National Guard documents hadn’t been produced in 1972: The materials faxed to CBS (so the story went) were actually hand-typed (in MS Word) copies of the 1972 originals, those originals having been (supposedly) restored to the TANG’s files so the source wouldn’t get caught.[1]  In other words, yes they were, well, “not the originals” (i.e., they were fakes copies), but the information they contained was “accurate.”  Nice try, but no cigar.

So here it is 2009, and the question now before the house is the authenticity of some “racist” statements being attributed to Rush Limbaugh, a number of which appear to have been made up out of whole cloth.  Yep, all over the leftosphere, and leaking into the Legacy Media, but when you drill down there’s no “there” there:

...where are these racist soundbites?  Where’s the audio?  Where’s the transcript?  Name the year. Heigh-ho, say CNN’s Rick Sanchez and the rest of the basement-ratings crowd. Not our problem...

Seems to me that it’s “fake but accurate,” all over again.  This time, instead of some willing reporter being fooled by (or buying into a scam created by) some political activist, we have a willing press picking up on deliberate lies created by people who have taken advantage of the web’s hall-of-mirrors nature to obscure their fingerprints.  Somebody makes something up and posts it on the web.  Somebody else links him, and that somebody then gets quoted by a third somebody.  Soon it’s part of the conventional wisdom, which nobody bothers to check it because it fits the narrative (and besides, it’s too good to check).

Because Rush Limbaugh is a rightie.  Righties are racists. (Axiom, self-evident.)  Racists make racist statements.  Therefore, any “racist statement” attributed to Rush must be real, because, well, he’s the kind of guy who would say things like that.

(Except we’re being asked to believe that the remarks, some of which are quite inflammatory and some of which were supposedly made years ago, failed to provoke any outcry until now.  Despite all the people who’ve been attempting to “get” Rush for years.  But nevermind...)

The Noisy Left has always been good at accepting stuff on faith (provided it coincides with their worldview).  The standard for the righties is much stricter, as this exchange in the comments at Blair’s place lays out nicely:

How is it that when Righties quote Lefties, they have video, audio, and notarized confirmation from the Pope, but when Lefties “quote” Righties, they have Wiki entries contributed by “Cobra”?
Dave S.
Wed 14 Oct 09 (02:05pm)

Peter M replied to Dave S.
Wed 14 Oct 09 (03:04pm)
Dave it is because we conservatives form our views after seeing the evidence.  In contrast the left forms their views and then look for evidence, and when they don’t find it they make it up.
moptop replied to Dave S.
Thu 15 Oct 09 (12:23am)
It is because the left believes in Revolutionary Truth, if it is required to destroy Limbaugh, then it is true.  We believe in Bourgeois Truth, having to do with such quotidian matters as facts and evidence, which as anybody can see,is far to limiting to be used to accomplish real change.
wronwright replied to Dave S.
Thu 15 Oct 09 (12:31am)
And when they make it up, it’s often in the form of newspaper articles and news show “exposes”. (See Rather, Dan; Mapes, Mary).  When caught they will say they know it’s true, they just couldn’t find evidence of it.

And, I would add, because we “Righties” are accustomed to getting our complaints blown off by the lefties unless our information is indisputably documented.

Anyway, it is not over yet (as they say), and it will be interesting to see how the next act plays out.  Because these accusations have begun to work their way into the mainstream press, and while making stuff up usually isn’t particularly dangerous in the blogosphere, it can be fatal if you’re a television network or some dead-tree publication.

Limbaugh is a public figure, and, as such, the standard for slandering or libeling him is more forgiving than that for some private citizen.  But it’s still possible, provided you’re wilfully or carelessly spreading known falsehoods.

Seems to me that, should Limbaugh choose to play hardball, “I found it in a pseudonymous post on some website” won’t make a very good answer to “What reason did you have to believe this is true?”

(Later) Glenn thinks its a trap- and Rush is the trapper!

I think this whole NFL thing is a Limbaugh-set trap for the press and Democratic pols, and it’s working.


Related:  I see our local NFL plutocrat, Mr. Irsay, has been drinking the kool-aid, too.  (Tell me again why we’re giving this guy $40 million a year.)

Elsewhere:
Ed Driscoll:  The faith-based encyclopedia in action (via IP)
Lloyd Marcus:  If Rush Limbaugh is a racist, are his 20 million listeners also?
“eddiebear”:  Liar lying about Limbaugh...
-----
[1]  This failed to account for the obvious attempts to make them look “old,” or that the CBS people appeared to believe that what they had been given were actual  photocopies of the 1972 originals.

Over the weekend, I noticed Gannett being Gannett again...

But there’s no need to rely on me when Roberta

...sifting through over 900,000 gun permits (including mine!) in (at least) two counties to come up with 211 supposedly iffy permit grants, four (4) of which they deemed bad enough to address in detail, three of whom have already had their License To Carry Handgun revoked for cause.

and Tam (and, on a couple of.other issues, Advance Indiana) are around!

Bloggers: Reading the newspaper, so you don’t have to...

“Whenever possible”
What the Dickens? Dept.
The Times (London):

Hazel Fenton, from East Sussex, is alive nine months after medics ruled she had only days to live, withdrew her antibiotics and denied her artificial feeding.  The former school matron had been placed on a controversial care plan intended to ease the last days of dying patients.

Doctors say Fenton is an example of patients who have been condemned to death on the Liverpool care pathway plan.  They argue that while it is suitable for patients who do have only days to live, it is being used more widely in the NHS, denying treatment to elderly patients who are not dying.
...
A spokesman for East Sussex Hospitals NHS Trust, demonstrating yet again that “There’s No Smarm Quite the Equal of British Institutional Smarm,” said: “Patients’ needs are assessed before they are placed on the [plan].  Daily reviews are undertaken by clinicians whenever possible.”

“If they would rather die,” said Scrooge, “they had better do it, and decrease the surplus population.”

1 Something I concluded during the Terri Schiavo debacle was that withdrawing life support = stopping support of organ systems that would otherwise fail without mechanical intervention, such as respirators and dialysis. Antibiotics and feeding tubes are, therefore, not "life support." Sure, if you withdraw the feeding tube, they die -- but if you take away their blankets, they die then, too. How is death by starvation and/or unchecked infection different from death by hypothermia?