She must be out of the loop
It’s obvious that Peggy Noonan didn’t get the memo.

No serious conservative needs to hear anything from Noonan except her groveling apology for being so horribly wrong about Barack Obama, who she energetically supported for president.  However, it’s worth picking through the flotsam and jetsam of this embarrassing column, to appreciate the kind of intellectual fat that conservatives need to trim from the Republican Party.

• Cassandra goes after somebody named Ta-Nehisi Coates.
• ...and, for reference, I should probably include a link to this Palin-palooza, since just about everybody (“As a man, this sort of bare-knuckles brawl rarely reaches my radar screen.”) else (“...there’s nothing like a left-wing feminist to dissect left-wing feminist misogyny from a new position.”) seems to have done so.
Credits:
PD link via NewsBusters via Roberta.
Doc0 via Mike:

...as good an entry-level summary of the core differences between us and them as I’ve seen anywhere.

(UPDATE 090713 18:48: I misunderstood, turns out Mike’s endorsement references this post, “them” being environmental Malthusians.  Although IMO the Doc’s Noonan post qualifies, too, with “them” being the faux-conservative RINOs.)
VC via Joy.

Ready - or Not?
Is your city prepared for a home-made nuke?
Via Instapundit, who notes:

I was discussing fallout in Administrative Law class... and realized that today’s law students have virtually no understanding of things that were common knowledge in my Cold War childhood. I suppose that’s a good sign overall, but . . . .

Radio Unprepared for Another 9/11

How is an industry that can’t stop the voice tracking and can’t even do the weather going to cover another emergency the level of 9/11 or worse?

The short answer is – it can’t.

Read ’em both.  And pleasant dreams.

TV snooze
Alarmed by a stabber-on-the-loose, Fillyjonk looks to the “local” newscast for more information:

Oh, you might be relieved to know that Michael Jackson is still dead.  And that his family is still fighting over custody of his kids.  And that that NFL player was killed by the girlfriend he was cheating on his wife with, because she suspected he was cheating on her with someone else.  Oh, and OH NOES OBESITY! More Americans are fat than ever were before.  And the poor economy is leading more people to abandon pets in shelters.  Oh, and if you live alone, you’re lots more likely to develop Alzheimer’s, apparently.

NONE OF THIS IS NEWS.

What I WANT to know is this: Is it safe for me to leave my house, or will I be set upon by someone with a knife?

Not a WORD breathed of that.  Then they shifted to a segment advertising a local “oxygen bar” (the heck?).

So, I took a deep breath, opened the door, walked to my garage, and got my car out.  Obviously I was not stabbed or I would not be writing this.

But it FRUSTRATES me: is not the point of having a “local” channel to broadcast news that is happening “locally”?  If I wanted to hear extended speculation on Jackson’s estate, or discussion of 20 year olds who date married football players, or scaremongering health news: well, there’s CNN, and CNN headline, and MSNBC, and Fox News, and I think a couple of others?

So I don't know.  I felt the same way a couple of years ago when we were having regular escapes from the local county jail (which is about 7 blocks from me the opposite direction of where the stabbing this morning was).

Real reporting is hard, and one dirty little secret of television news is that, despite all the trumpeting of “live, local, and first,” stations have never had the manpower to do it properly.[1]  (It’s a paradox: The staff is so pressed to produce x minutes of material every day that they don’t have the time for digging into complex stories.[2])

The fluff gets added for a number of reasons.  It’s not (particularly) time-sensitive, it’s predictable (so no surprises in the production process), and it’s cheap(er).[3]  Plus, there are still a few stations that operate under the misconception that women aren’t interested in hard news.

And, of course, the cheapest part of the news is the chat across the anchor desk.


Related:
Chewing Gum For Your Brain
Stunning losses at the Star
Previously:
The Post has other priorities
Via: CGH
-----
[1]  Plus, broadcast news departments have always relied on the local newspaper to tell them what the (local) news is.  (A practice that’s becoming less reliable, given today’s shrinking newsrooms.)

[2]  There’s the old saw that the ideal TV news story is a fire: It stays in one place, continues for long enough for the mobile unit to get there, and yields lots of spectacular images, just for pointing the camera.  Car chases also qualify, provided the station has a helicopter.

[3]  There are even advocacy groups/PR firms/advertisers/government agencies who will provide complete “reports” (or just visuals, ready for local narration) covering their pet “issues.”

Yes, they are...
SayUncle is discovering some differences between cats and dogs.

Latest: Stories from Beyond the Grave! 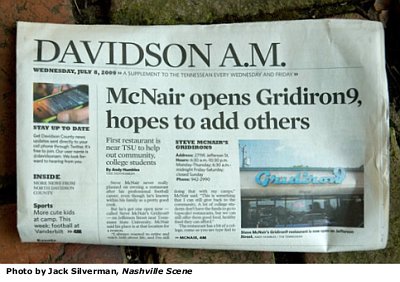 I was caught off-guard when Scene art director Rob Williams called yesterday to ask if I had seen this week’s Davidson A.M. [a weekly neighborhood supplement to The Tennessean - o.g.].  He had been shocked to pick up his copy (in Germantown), only to find the following headline as the lead story: “McNair opens Gridiron9, hopes to add others.”  With jaw dropped, I ran out to find mine wedged in the monkey grass along my walkway, and sure enough, Rob was right.  The lead story talks about McNair’s new restaurant and features quotes from the now deceased quarterback.  And the paper is clearly marked “Wednesday, July 8, 2009.”
…
Is it... common practice to go ahead and deliver said paper if it makes you look ridiculous?

Well, newsprint is expensive!  Credibility, I guess, not so much.

Via:  the comments at Gannett Blog

Clipfile - July 9, 2009 “The difference between a pundit and a reporter can be summarized in four words: ‘Pick up the phone!’ … If you never get up off your butt, make some phone calls and do some reporting, you stop thinking like a journalist. Before you know it, you’re just another damned useless intellectual.” - R.S.McCain

Thinking outside the bubble
James Lileks offers an amusing (and wise) look at the plight of newspapers:

I’ve had more fun at the job in the last two years than ever before, and I’ve also seen more enthusiasm, initiative and out of the box thinking.  For instance: what if we sell the box?  No one’s been in the box for years.

All this, plus The Faces of The Price is Right.  RTWT.

1 My wife and I have lost three cats over the years. The first was Morris, or Pookie as my daughter renamed him. He was 15 when we inherited him. He lived with us for three years. He was followed by our two garage-sale sibs, Chicory (male) and Willow (female) a brother/sister pair. They stayed for five and six years until kidney failure took them one at a time. We now have a mother/daughter pair, Amber (a small tiger-stripped tabby) and her daughter Snowflake (a large pure-black cat weighing nearly fifteen pounds and not fat.)

A house without a pet, dog and/or cat, is a lonely house.

Bobbie has a new blog
Forward, into the past!

1 So far as I know, Cymbalta isn't worth a flip against the flu.