And speaking of “out of patience”...
What the hell is the National Rifle Association doing endorsing John McCain over J.D. Hayworth?

Via:  The Other One.

January preview?
BritBlogger Devil’s Kitchen is less than enthusiastic about the new government’s performance so far:

I mean, NuLabour apparently introduced something like 4,300 new criminal offences, and the only things that the Coalition seem to have announced are higher taxes, probable higher taxes, and more crack-downs on personal freedom.

So, would anyone like to tell me what illiberal laws—apart from ID cards (which didn’t really exist anyway)—Our New Coalition Overlords are going to scrap?  Because I’m slightly in the dark.

While most of his commenters are willing to give the Coalition some time, several express sentiments strikingly similar to many in this Mitch-Daniels-“Truce” thread at the American Spectator Blog.

The natives aren’t just restless, they’re out for blood and out of patience.

Elsewhere:
Did you ever stop and think...
LATER, RELATED:
“...an emotional impulse without rigorous thinking behind it.” 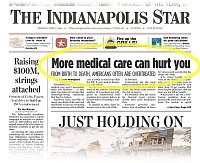 Clipfile - June 2, 2010 “Of all the handicaps that a culture can labor under, no disadvantage is quite so heavy as an addiction to lies. The sheer inability of the intellectual and cultural leaders, the priests of political correctness, to see past their own conceits is a terrible burden to endure.” - Richard Fernandez

Service resuming shortly...
Excuses, excuses... Dept
The silence around here can be best attributed to a semi-expected project deathmarch followed by a planned trip out of town.  More substantial posts will follow, as I get the laundry done and clean the stack of stuff off my desk.

1 We were beginning to wonder...