How to put your “favorite” Blogspot blogger off the air
...or at least make them harder to get to.
Have been watching this one develop for a day or so.  Friday night it made Instapundit:

Sure enough, if you click on Glenn’s link, you get... 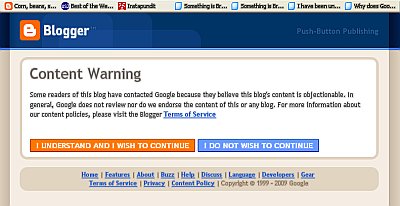 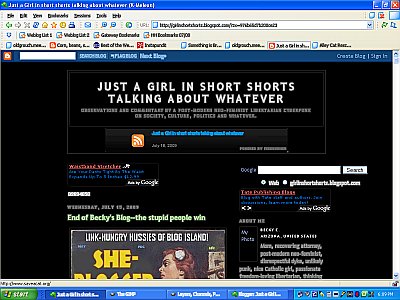 which (aside from the gray-on-black typography - hard for these old eyes to read - and the plethora of images - the page takes 5 minutes to load on my creaky dialup) includes such NSFW posts as The Libertarian Case For Judicial Activism (’cause that’s the path to Second Amendment incorporation- a good thing, right?), Social Security Administrators’ $700,000 Party (team building at the Biltmore Resort in Phoenix), Beware of Googlers Bearing Gifts (this one about the privacy implications of Google’s Chrome operating system and the company’s mounting stack of knowledge about each one of us) and The Victimization of Sarah Palin (no explanation necessary).

The only risqué or objectionable items that I saw were this a couple of images that accompanied the Palin post:  The risqué (NSFW, provided your employer is Pecksniff & Grundy): 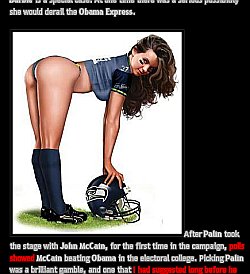 ...and the objectionable (news photo, language, not safe for animals or children, eye bleach required after!): 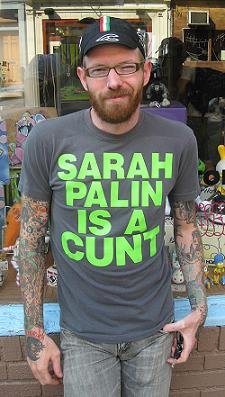 Oh yes, there is a post about Greening Up the World's Sex Life (Yeah, gw’an and clickit, ya pervert!), which turned out to be much less sexy that a lot of what’s available on daytime television.

Oh, she also doesn’t like Barak Obama’s programs and proposals very much.  And she’s pro-life.  And a self-described “recovering attorney” and “post-modern neo-feminist disrespectful dyke”  (NTTAWWT).

So whats going on?  Appears to be another case of “the enlightened” making use of Blogger’s “Flag Blog” button to punish another wrong-thinker.

You know, this button...

Because all it takes is for enough people to click it, and the blog gets flagged... automagically!

This blog chugged along for two and a half years without any problems, but with the Dawn of the Age of Obama—nothing but trouble.  The blog has never changed, and it certainly has not changed since May—the last time this happened, and Google, after an avalanche of complaints from my readers, decided that I am not really a purveyor of smut and removed the content warning splash page.
...
[The Flaggers] are offended that I do not worship the water that Barack Obama walks on—but when I was a pretty severe critic of George Bush these types could not get enough of me.

Liberals can be such spoil sports.

For those who aren’t aware of it, Blogger’s content-warning page will break search-engine spidering and also disconnect the blog from aggregators like Technorati.  And it adds a warning to any remaining Google links.  So being flagged can do horrible things to a blog’s visiblilty.

In fact, the only way word of my posts is getting out, on a regular basis, is through Culture 11—a social conservative site that snags my feed and it is picked up by some of the news wires—including Google News.

I must say, I find it rather amusing that a website started by folks like Bill Bennett, is more tolerant, and less prudish, than the enlightened New Age Yuppies of Mountain View.

And the blog stays flagged until someone at Google/Blogger decides to rescind it.

What’s more dismaying, this go-around is a repeat of a similar one that took place - and was supposedly resolved - one month ago.

o-o-0-o-o
As I mentioned at the top, I had noticed this a couple of days back, when I’d been trying to run down the answer to a problem I’ve had making comments on a couple of Blogger-hosted blogs.

Of course there’s no way to contact a real person at Google/Blogger.  So one must be content with its posted documentation, or, failing that, its support forums, where confused and angry users try to help each other.  Turns out that in the Something Is Broken forum there are a lot of questions (with not many answers) from people having problems posting comments.[1]  But there were also several threads about the GISS blog, including one with this snippy reply from a “Top Contributor,” (preserved here for your amazement, hilighting mine):

There are now a dozen threads taking up space in BHF, with everybody whining about this one blog that had an interstitial warning (and does not have, right now [wrong - o.g.]).  The soonest anything might even possibly be done will be Monday of next week, yet we have dozens of your readers posting daily.

If Blogger is to retain any control over the spam and pimping here, they will most likely have to ignore the whining, and leave the matter unresolved for several additional days, as “punishment”.  Otherwise, every blog that gets graced by an interstitial warning will engender the same amount of bitching and pimping. BHF will become nothing more than a forum of “xxxxxxx blog should not have an interstitial warning!”. We saw this last year, with The Daily Coyote.  [Guess they didn’t fix that problem, did they? - o.g.]
...
If you care about GISS, you will convince your readers to shut the fuck up, and wait until next week.  Either Blogger may remove the interstitial, or they will delete the blog and give you something to really whine about. I am inclined to recommend the latter, right now.

There are ways to get out from under Blogger’s warnings.  Blogs can be hosted on the blogger’s own server (even using Blogger’s software), or the blogger can obtain a custom domain address.[2]  Either moves the blog out of the “Blogspot” domain (which seems to be Google’s major concern[3]).  And, of course, there’s always the possibility of moving somewhere with more liberal terms and conditions guts.[4]  But any of those options take time, and, if your old site just disappears, your readers will be left wondering what happened.

Which is something that anyone who posts on Blogger and might create (or have) some enemies ought to think about.
UPDATE 090724 20:02:  Google Product Manager Rick Klau tries to spin it as purely a “nudity” issue:

We simply responded to the fact that a number of posts there do, in fact, contain nudity.  Visitors to the site flagged the blog as containing objectionable content, and as set out in our TOS, blogs that contain nudity may contain an interstitial to let readers know what they will find when they click through.

Challenged to address the practice of using “objectionable content” complaints to game the system for ideological suppression, he says

I can’t see how us subjectively applying our standards helps anyone.

Related:
A Consuming Experience:  Flag as objectionable - censorship vs freedom of speech

Glance at the bottom of Blogger’s help page about “unlisted”, and you'll see that not only will the blog not appear against the owner's Blogger profile - it won't be crawled by search engines either (if the blog is using Blogger’s BlogMetaData tag - which includes all blogs using one of their standard templates).  And on the web, as everyone knows, if you’re not crawled by the search engines you may as well be invisible. So, it’s not very different from censoring the blog in question - to say otherwise is really being quite disingenuous. It seems to me the bottom line is: if you’re unlisted, you're toast.

A new report alleging that Google’s new “flag” feature has been used to censor a blog on the grounds that readers have disagreed with the opinion of a writer has appeared, in what if proven true would be the first case of the service announced last week being used in such a a way.

You can’t expect the people who run Blogger to check each site personally, and there has to be a method of monitoring content.  The problem is that the manner in which a web log’s fate is decided is not through an objective study of its content by the administrators, but through the number of times it’s flagged as objectionable.

While they may cite a book called The Wisdom Of Crowds... to justify this as creating community standards, they have overlooked two things.  One, there is little separating that concept from the mentality of mob rule and lynch mobs; two, there is the potential for abusing this system.

How hard would it be for some group to organize themselves to generate enough votes by individual members to effectively block a person’s web site?  If special interest groups can organize to flood the switchboards of the F.C.C. over Janet Jackson’s nipple, why couldn't they manipulate results here in the same manner?

It’s not hard to see why the fallacy of collectivism has become so popular in big organizations:  If the principle is correct, then individuals should not be required to take on risks or responsibilities.  We live in times of tremendous uncertainties coupled with infinite liability phobia, and we must function within institutions that are loyal to no executive, much less to any lower level member.  Every individual who is afraid to say the wrong thing within his or her organization is safer when hiding behind a wiki or some other Meta aggregation ritual.

-----
[1]  Turns out there’s an Internet Explorer issue - not guilty here - and another which has to do with broken widgets for comments embedded below the post (Ahem!) which has to be fixed by the blog owner (Ahem! Ahem!).

[3]  But see A Consuming Experience’s warning about the BlogMetaData tag.

[4]  As:  A crowd of objectors can’t silence somebody without a real person getting involved.

It was good to see you again and visit a bit this time.  It's fun to run into someone who's a movie buff.  Me too.

See ya around the blogs!

This is the first I've become aware of this 'warning'.  I can't get it to come up on my home-site, so when did it first appear and for what particular post?

Thanks for the HEADS UP!  I shall have to take action.

3 Not at yours, at hers.  I needed a shot of a Blogspot site to show where the button is, and I happened to have yours up in another window.  Yours isn't flagged.