Saving daylight: So, what’s in the account?
(My previous post, mostly about Indiana’s time follies, is here.)

If you’d like to play along at home, you can download sunrise/twilight tables for the entire year, customized to your location, from the U.S. Naval Observatory at one of these links:
[U.S. Cities and Towns by name]
[rest of the world by latitude and longitude]
First, a few definitions:
Sunrise and sunset  ...the times when the upper edge of the disk of the Sun is on the horizon, considered unobstructed relative to the location of interest. Atmospheric conditions are assumed to be average, and the location is in a level region on the Earth’s surface.

Twilight:  Before sunrise and again after sunset there are intervals of time, twilight, during which there is natural light provided by the upper atmosphere, which does receive direct sunlight and reflects part of it toward the Earth’s surface.

Nautical twilight is defined to begin in the morning, and to end in the evening, when the center of the sun is geometrically 12 degrees below the horizon.  At the beginning or end of nautical twilight, under good atmospheric conditions and in the absence of other illumination, general outlines of ground objects may be distinguishable, but detailed outdoor operations are not possible, and the horizon is indistinct.

Now let’s look at Daylight saving, or, rather, let’s first not look at daylight saving.  Here’s a plot of the sunrise/sunset and Civil twilight data for Indianapolis for the year 2009.  Violet is darkness; the orange bands are the periods of Civil twilight: 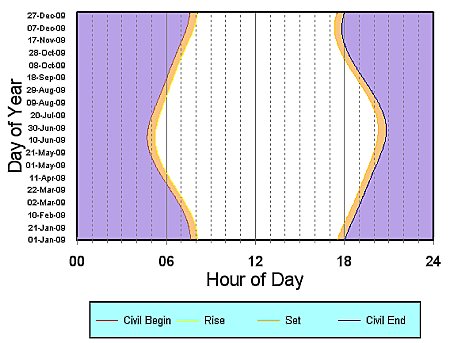 With daylight savings added, the plot looks like this: 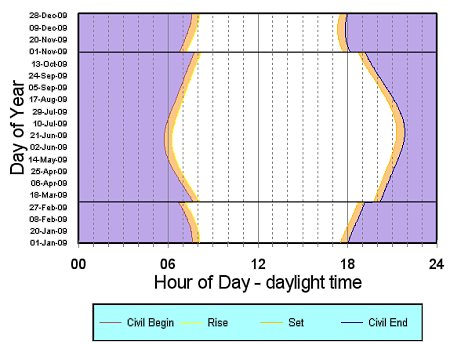 As you can see, the major result is to extend the working day at the expense of the early morning.  But there are some other interesting effects:

You do get more light at the end of the day, just hope you don’t have kids to put to bed:  Even without DST the end of Civil twilight (remember, not darkness - that’s half-an-hour later) falls after 8:30 p.m. (2030) from May 22 to July 30.  Daylight saving makes the sky Civil-twilight-or-brighter from March 26 to September 9, with the latest end of Civil twilight at 9:50p.m. (2150) on June 26 and 27.  The golf courses love it, but pity the drive-in theater operators (or you, if you want to do some weeknight astronomy). 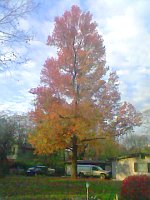 Homeward commuters don’t have it quite as bad:  Drivers headed westbound between 5 and 6 o’clock face the sun for 29 days (from January 1 to January 28), 16 days from March 8 to March 23 (but only if their travel was 5:44 or later), and finally the 61 days from November 1 (when the end of DST moved sunset from 6:43 to 5:43) to the end of the year. Overall, 105 days under daylight, 103 without:  A wash, with the only disadvantage the sudden appearance of the setting sun on November 1.

That last congressional revision of DST dates also ensured that the latest sunrise of the year no longer falls in late December, when you might expect it. This year it took place on October 31, at 8:12 a.m..  (The latest December sunrise- actually December 30-January 8- is 8:06 a.m..  The final seven days in October have sunrises at 8:06 daylight or later, moving the end of DST to the first Sunday in November means those sunrises will always occur under daylight time.)


Another way to look at DST is to examine its effect on a few critical hours, times associated with important activities.  I’ve picked these:


So, there you have it.
Is Daylight Saving worth it, or not?
I report, you decide.

No.  Daylight Savings Time is worthless because of the springing forward/falling backward idiocy.  It's a twice-annual pain in the ass.

We need to pick a time and stick with it.  Pick either -0500 GMT or -0400 GMT for Eastern time, either one is fine.  But PICK ONE and quit glorying over the "extra" hour of daylight.  Geez.