Sometimes stories just stop
While doing the annual Holiday Sort Through My Bookmarks routine, I revisited a site that I'd added back in April of 2005. Well not immediately. Thomas had moved a year later, but by then I'd gotten out of the habit of reading him, and my bookmark still pointed to the old address. But all that's been settled. Anyway...

I don't remember how I came to Thomas's blog originally, but while there I revisited the post that led to the bookmark:

For the past couple of weeks I’ve noticed a cat, probably no more than six or seven months old, moving slowly about in the garden outside my balcony. 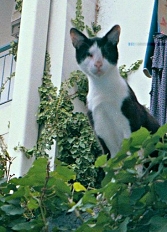 ...
Later I saw the cat up on the high wall, meowing loudly. I noticed it had no eyes. A woman was down at the end of the high wall, to the right of the ledge, where the people who live in the building around the corner park their cars. She was dangling her keys and calling out to the cat, which couldn’t find its way back to the tree it had climbed up to get to where it was.

I saw it again today, standing on the high wall, “looking” down.

How does a cat survive in a city like Athens with no eyes?...

(Do go read the whole post. Thomas is a fine writer.)

Thus reacquainted, I thought to look through the archives, to see if there was anything more about the cat. Fortunately, Thomas created a category. But it contains a scant four posts, the most recent dating from only two months after the first (over two years ago), a time when I was still reading him regularly. After that, nothing more. Silence.

Indeed. What was his fate? Did he die in traffic, or mauled by a dog, or quietly starve under a bush somewhere, unable to fend for himself?

Or did someone take pity on him and make him their own, so that today he is well-loved, and sleeps on the windowsill on sunny afternoons, and never ventures out?

Or did he always belong to some neighbor, who moved elsewhere, taking him with her?