The adventure of the disappearing pajamas
Pajamas Media “disappears” a story?
Two days ago, I followed a link at Instapundit:

The link (in burgundy in the screenshot), points to:
http://pajamasmedia.com/rogerkimball/2008/06/23/encounter-bids-the-new-york-times-farewell/

...a Pajamas Media opinion piece by Encounter Books publisher Roger Kimball.  In it, Kimball announced that his company had decided to stop providing review copies of its new publications to The New York Times, and gave his reasons.  First (if I recall correctly) because of the Times’s penchant for giving unfairly unfavorable[1] reviews to anything contaminated with the least taint of conservatism.  Second, because the explosion of alternate channels of publicity (along with the Times’s decline) means that a Times review today is no longer as valuable for attracting readers as used to be.  In the comments, one of Encounter’s authors chimed in, and in passing (but, I’m sure, fully intentionally), mentioned two of his own books.  Both titles piqued my interest, but at that point I was interrupted, and had to close the page.  However I did make a mental note to get back to it later, so I could add them to my want list.

That was two days ago.

This evening, my mental note percolated to the surface.  So, back to Instapundit, scroll down to the link, click on it, and get... the Pajamas Media home page.  Well, things like that can happen. Sometimes “permalinks,” well, aren’t.[2]  Perhaps Glenn got the wrong one.  Scan the page... Hmm... don’t see anything that looks like the article I read.  Gee, it was only a couple of days ago- surely it can’t have scrolled off already!  Let’s try the browser’s search:  Find "Kimball". 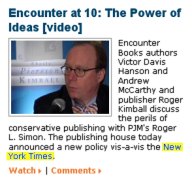 K-Meleon finds one "Kimball" on the home page.  This one:

Which is a video, not the piece I read.  But look, the words “New York Times” in the last sentence are a link, a link which points to the same address as the Instapundit link, an address that no longer works.

One last try.  Poke "Roger Kimball" into the PJM searchbox.  The results: The video above, and several other items dating from April 19th or before.  But “Encounter Bids the New York Times Farewell,” which was posted on June 23rd– and which I read– appears to have vanished.

Perhaps there were some second thoughts.  Could be that, on reflection, the time for burning bridges with the Times hasn‘t come yet.  That dying tiger can still do a lot of damage, especially if your business is as dominated by liberals and leftists as the book trade.  Or perhaps some of Encounter’s other authors were heard from, authors surprised and dismayed by an announcement that came from out of the blue, without warning.

Maybe the article should have been more politic.  Better if there’d been more nuance.  Perhaps better if it hadn’t appeared at all.

Well, Kimball and Pajamas can do whatever they want.  But it seems to me that making articles disappear ranks right up there with the frequently-condemned (e.g., over 600 results for the BBC) “stealth edits” practiced on the web by the legacy media.  The malleability of the internet is a strength, but also a weakness: With dead trees, whether it’s an intemperate screed or a “Dewey Defeats Truman” howler, once it’s published it can’t be taken back.

If we who write on the web are to maintain our integrity, then, along with our prides and triumphs, our embarrassments and errors must remain visible.  It may be uncomfortable, but it’s honest.

[2] For example, some “permalinks”actually point to the most recent of a series of posts.  Often this variant is not obvious.