Western Digital: What were they thinking?
So I have this Ancient Legacy Box[1] that runs some ancient legacy software.[2]

Within the Ancient Legacy Box is an IDE hard drive that is beginning to develop some bad sectors. It’s time to change it.

A trip to Fry’s results in the smallest IDE that I could find: A 320 gig Western Digital Caviar, for about 90 bucks. 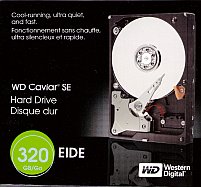 Of course, the ancient legacy software doesn’t require anywhere near that much space (visualize a ping-pong ball rattling around in a van), but at less than $100, who cares?

Meanwhile, assisting minion has used our ancient legacy backup program to extract 75 floppies-worth of data from the failing drive.

So now we’re ready to install.  On opening the new drive’s package, I find the drive, a CD-ROM containing WD’s Lifeguard Tools installation software, and a manual. TFM says:

Find any IDE Auto Detection or Auto Config option that may be present in your BIOS.

If given a choice, select the (Logical Block Addressing) LBA option and enable it. In some cases, LBA will be an option under IDE Translation Mode. In other systems, Auto Detection is preselected...

If you do not have either option, you must use Data Lifeguard Tools to install your new hard drive...

Which means booting from the Lifeguard Tools disc.

Now remember, this is an Ancient Legacy Box.  So ancient that its boot drive is a 5¼" floppy.  CD-ROM?  “What is this CD-ROM of which you speak?”

Fortunately, the Lifeguard Tools CD includes a routine to load the necessary software onto a bootable floppy.  Which requires a computer with a CD drive.  Fortunately there’s one across the room.  Its floppy drive, however, is 3½".

Well, the Ancient Legacy Box also has a 3½" floppy drive.  It’s not the boot drive, but a minute or so rearranging cables and reconfiguring the BIOS fixes that.

Well, in short, what WD’s installation program is trying to do is create a ramdisc, load all of the program files onto it, and then configure the system from there.  What it’s actually doing is, first, eating up all the memory by duplicating files that are already on the floppy, then complaining that there isn’t enough memory left free to run the program!

Well, this is an Ancient Legacy System.  One from the days when a couple of megabytes of memory was “a lot.”  But one would think that the WD folks would understand that when someone has to use a floppy as a boot disc it’s unlikely that the machine involved will have tons of extra memory to spare for stuff like ramdiscs.  Meaning it might be a good idea to, y’know, lose the fancy graphics and splash screens, and instead make sure the setup program is small enough to run off the floppy.  But no!

Which means that, for the moment, I’m stuck with what I can do using FDISK and FORMAT.  Which means that my brand-new 320 gigabyte drive is reporting in at 500-some megabytes.  But at least it runs.  (Which will get me through the end of the month.)

[2] would you believe compiled Clipper? (Yes, it’s a business app.)

2 My problem is that I tend to run stuff until the wheels fall off, which means there aren’t a lot of spares lying around:  This particular machine is now on its third hard drive, as well as its second power supply and its second b: drive, and its third keyboard.  (The other Legacy Box is up to  hard drive #2, b: drive #3, mother board #2, and will have CD-ROM #2 whenever I get motivated to change it.)

Never seen a dual-floppy drive like you describe.  I assume it’s now a collectors’ item!